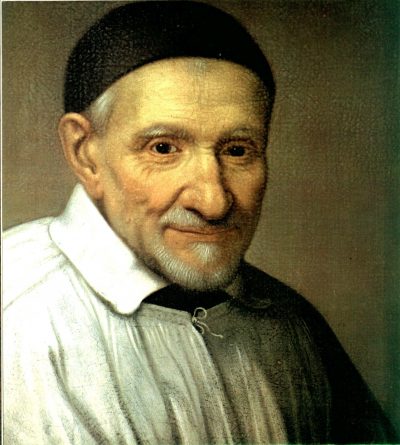 When Saints Help Saints
I have long believed that saints, like the fruit of the vine, grow in clusters. The history of the saints in every age bears this out. Saint Vincent de Paul was no exception. He was in relation with a myriad of other holy souls of France’s Grand Siècle, the age of what Henri Brémond called her “mystical invasion.”

Saint Vincent de Paul
The ravages of The Thirty Years War in Mother Mectilde’s native Lorraine stirred Saint Vincent de Paul to an active compassion. As soon as Monsieur Vincent was informed of the woes that we desolating the Lorraine, he moved quickly to collect offerings everywhere. He sent to this unfortunate country twelve of his missionaries to whom he joined some brothers of his Congregation, who had secrets to treat the plague and knew medicine and surgery. Thus did Saint Vincent’s Congregation of the Mission bring relief to those distressed by the war, those turned out of their homes and reduced to a miserable poverty.

Homeless Benedictines
In 1639 Mother Mectilde and her Benedictines were among the many refugees of the War in wandering from place to place in search of a home. One of Saint Vincent’s priests, a certain Julien Guérin, sought to arrange for hospitality at the Abbey of Montmartre in Paris. The Lady Abbess of Montmartre refused to receive the homeless Benedictines professed to the same Rule as herself and the nuns of her great abbey; she argued that the admission of strangers into religious houses caused disorder, and that it was better to refuse the nuns hospitality than to have to turn them out later for unsuitable conduct. 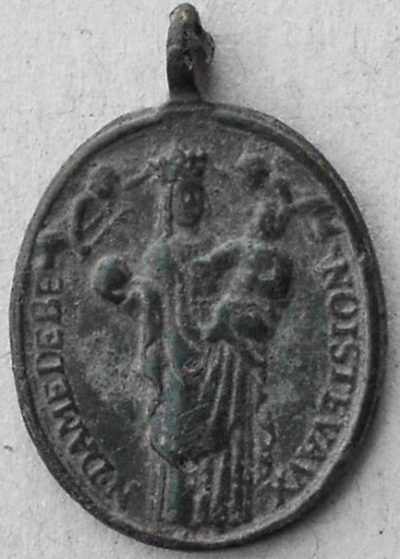 Pilgrimage to Benoîte-Vaux
Mother Mectilde was saddened but undaunted. Five leagues away from Saint-Mihiel, towards the city of Verdun, a little to the left of the course of the Meuse, there was valley made famous by the miraculous revelation of a statue of the Blessed Virgin to a group of lumberjacks, and by the manifestation of Angels singing Ave Maria. (Interesting detail: Had Mother Mectilde followed the Meuse north, she would have arrived in Tegelen in The Netherlands where her daughters have a monastery to this day.) The sanctuary built on the spot was a place of pilgrimage. Mother Mectilde, together with two other nuns, set out on foot for the sanctuary of Notre-Dame de Benoîte-Vaux on 1 August 1641. Upon arrival there, they entrusted their written petition to a Premonstratensian in attendance, who placed it on the altar. Prostrate at the feet of the Blessed Virgin, Mother Mectilde and her companions spent the whole night imploring her protection and assistance. They heard Holy Mass and received Holy Communion at 4:00 in the morning on the second day of August; it was the feast of Our Lady of the Angels. With all possible fervour they recommended their sorry plight again to the Mother of God.

To Paris
When they returned to Saint-Mihiel, it was obvious to all who saw Mother Mectilde and her two companions that they had received extraordinary graces; they seemed transfigured. Much later, Mother Mectilde let slip a few words that intimated that, in the sanctuary of Benoîte-Vaux, Our Lady revealed to her God’s designs on her life. A few days later, a commissary of Monsieur Vincent, named Mathieu Renard, asked to see the prioress and, with no preliminaries, said, “I have come, Mother, to take two of your religious to Montmartre, I have orders to do this, and Madame the Duchess of Aiguillon has provided me with money for the journey.” What happened at Montmartre that caused the Abbess to have so complete a change of heart? On the very night that Mother Mectilde and her companions were praying at the sanctuary of Benoîte-Vaux, the Lady Abbess of Montmartre woke up all of a sudden and summoned the two religious who slept in her bedchamber to look after her in illness. The Abbess was in a dreadful state of fright. She said that it seemed to her that she saw the Most Holy Virgin and her Divine Son reproaching her for her lack of hospitality to the poor homeless Benedictines in the Lorraine; they threatened her with a rigourous judgment should they, through her fault, perish in their misery and need. The next day the Abbess convened her senior religious; all agreed that they had to execute the manifest will of God.

Towards a New Beginning
It was in uncertainty and poverty that Mother Mectilde de Bar arrived in Paris. After vicissitudes too many to be counted, it was in Paris that Mectilde de Bar laid the foundations of the Benedictines of Perpetual Adoration of the Most Holy Sacrament.

Our Own Need
Eight years ago, my own little Benedictine community was searching for a permanent home to allow our vocation of Eucharistic adoration and intercession for priests to grow and flourish. We entrusted our need and our search to Saint Vincent de Paul. He who helped Mectilde de Bar was not indifferent to our plight. He guided us all the way to Silverstream in County Meath. For this, I want, today, to give public thanks to Saint Vincent.