Skip to content
HomeHoly GhostThat charity of God which, being perfect, casteth out fear (VII:15) 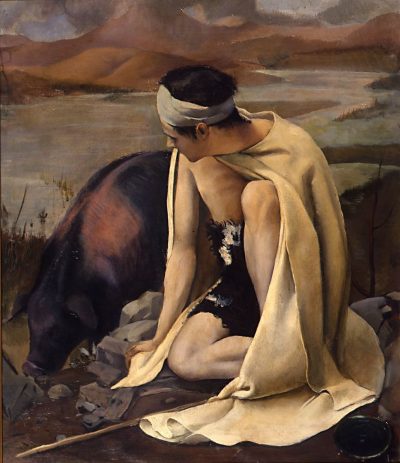 Having, therefore, ascended all these degrees of humility, the monk will presently arrive at that charity of God which, being perfect, casteth out fear: whereby he shall begin to keep, without labour, and as it were naturally and by custom, all those precepts which he had hitherto observed through fear: no longer through dread of hell, but for the love of Christ, and of a good habit and a delight in virtue which God will vouchsafe to manifest by the Holy Spirit in his labourer, now cleansed from vice and sin.

The twelve degrees of humility are an ascent to that “perfect charity that casteth out fear” (1 John 4:18). This charity or, if you prefer, this love, is no mere human benevolence; it is the the Holy Ghost Himself. Saint Thomas says that just as Word is the proper name of the Son, so is Love the proper name of the Holy Ghost. Servile fear, then—the fear that keeps a man from believing in the love of the Father and abandoning himself to that love as a little child—that fear is cast out of the heart of a man by the Holy Ghost Himself, for the Holy Ghost is the mutual and substantial Love of the Father and the Word. When the Holy Ghost enters a soul to confer upon that soul the grace of divine adoption, and when that soul submits humbly to all His divine operations, the soul is united to the Son and begins to relate to the Father even as the Son relates to the Father.

The Doctor of Divine Adoption is Blessed Abbot Columba Marmion, and no one better than he, at least in modern times, explains the grace of divine adoption more simply, more effectively, and more luminously. What is the essence of Blessed Marmion’s doctrine? I think he sums it up in these words from Christ the Life of the Soul:

Grace here below, glory above; but it is the same God who gives us both and, as I have said, glory is only the unfolding of grace: the Divine Adoption, on earth, is hidden and imperfect, in heaven it is revealed and consummated.

If, as I hope and pray, Blessed Columba Marmion is one day declared a Doctor of the Church— Ireland’s first Doctor of the Church—it will be, I think, as the Doctor of Divine Adoption. Blessed Marmion sees in every baptized soul another “beloved son”; one in whom the Father recognizes, and delights in, the features of the face of His Only-Begotten Son, reproduced by the Holy Ghost; one becomes by grace what Jesus is by nature; one who can address the Father with filial confidence, with boldness, with the full assurance of being heard.

The chief work of the Holy Ghost in souls is to reveal the Father and to infuse in them all the dispositions of the Heart of Jesus towards the Father. Rightly will we sing twice each day during this Octave of Pentecost, at both Terce and Vespers:

Make Thou to us the Father known,
Teach us the Eternal Son to own,
Be this our never–changing creed:
That Thou dost from them both proceed.

The chief work of the Evil Spirit is to obscure the Father, to sow tares amidst the wheat, and to insinuate into souls the opposite of the filial virtues infused by the Holy Ghost. In place of filial trust and childlike abandonment to the Father, the Evil Spirit insinuates mistrust, fear, and often scrupulosity. The work of the devil is to throw up barricades on the road of return to the Father until, at length, a man becomes weary of the journey home, turns on his heel, and goes back to his former state in regione dissimilitudinis, that is, in the land of unlikeness to the Word in whose image man was created. Again, we shall sing twice daily throughout this Octave of Pentecost:

Drive far away our ghostly foe,
And Thine abiding peace bestow;
If Thou be our preventing Guide,
No evil can our steps betide.

The strategy of the Evil One is always to suggest abandonment by the Father. The devil never tires of hissing that the Father is absent. The devil’s strategy is to make the Father seem remote, cruel, and vindictive. It is to plant in souls the seeds of mistrust, servile fear, defiance, disobedience, and even blasphemy. More often than not, the Evil One does this by turning a man away from Christ, and particularly from Christ in the Most Blessed Sacrament, which is the very mystery of Christ’s nearness, and the fulfilment of His promise: “behold I am with you all days, even to the consummation of the world” (Matthew 28:20). Without Christ no one can see the Father, or go to the Father, or pray to the Father. “No man,” says Our Lord, “cometh to the Father, but by me” (John 14:6).

The devil further alienates souls from the Father—indirectly, but very effectively—by pointing to all the flaws and deficiencies in our earthly fathers, in our spiritual fathers, in the abbot of the monastery, and in all authority figures. The devil is an astute psychologist. He plays on whatever he knows of one’s childhood and past experience—sorrows, disappointments, betrayals, and abandonments—to undermine confidence in the heavenly Father. Men who grow up with a certain affective deficit caused by an absent father, a weak father, a distant father, or a malevolent father, are more easily persuaded that God the Father is absent, weak, distant, and malevolent. One must unmask the lies of the devil, his slanders against the God the Father, and counter them with acts of faith, hope, and charity.

Being unable to separate the Son from the Father and unable to destroy their unity in the Holy Ghost, the devil seeks by every means to drive a wedge of division between the baptized, sons by adoption, and their heavenly Father. All those persons and things that, in the divine economy, foster the grace of filial adoption become the object of Satan’s rage: first of all, the Immaculate Virgin in whose womb God took flesh, becoming man without ceasing to be God; then, Jesus Christ Himself truly present in the Most Holy Sacrament of the Altar; then, those men who, in their souls, bear the indelible character of the priesthood of Christ; then, all who represent divine authority, those men who are, in some way, a reflection of the Father either in the family, or in the monastery, or in the Church; and, finally, all of those sacred signs, material things, by which grace is conferred, and souls are purified, healed, and sanctified.