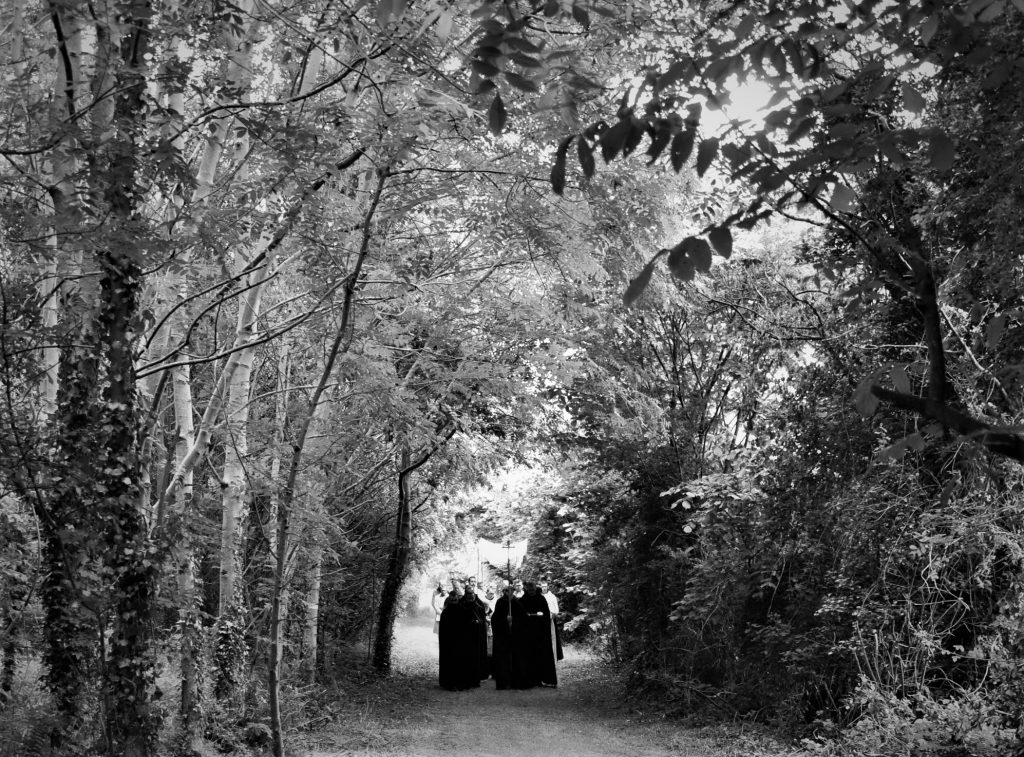 CHAPTER XXII. How the Monks are to sleep
27 Feb. 29 June. 29 Oct.
Let them sleep each one in a separate bed, receiving bedding suitable to their manner of life, as the Abbot shall appoint. If possible, let all sleep in one place: but if the number do not permit of this, let them repose by tens or twenties with the seniors who have charge of them. Let a candle burn constantly in the cell until morning. Let them sleep clothed, and girded with belts or cords – but not with knives at their sides, lest perchance they wound themselves in their sleep – and thus be always ready, so that when the signal is given they may rise without delay, and hasten each to forestall the other in going to the Work of God, yet with all gravity and modesty. Let not the younger brethren have their beds by themselves, but among those of the seniors. And when they rise for the Work of God, let them gently encourage one another, because of the excuses of the drowsy.

It is noteworthy that immediately after treating of the Opus Dei in Chapters VIII through XX, Saint Benedict addresses two pressing considerations: (1) support and help for the abbot lest he be crushed beneath the weight of burdens too heavy to bear; and (2) the necessity for the monks to get a good night’s sleep so as to be able to rise promptly for the Opus Dei.

This chapter may be read at different levels. The first pertains quite simply to sleep and to rising: universal actions of every human life. There is a solid natural wisdom in getting up on time and going to bed on time. Problems that seemed insurmountable one day often become manageable after a good night’s sleep. Many of the problems that plague novices and young monks are related to sleep. A sleep deprived monk is cranky and negative. Anyone who has had experience with small children will know that, deprived of their little nap, they become obstreperous and insufferable. I have learned from experience that the same thing applies to monks. A monk who is not sleeping well becomes obstreperous and insufferable. For this reason, the Father Zelator must often enquire how the brothers in his care are sleeping.

Many crises would be avoided if monks would keep in mind the acronym: H–A–L–T. The monk who is hungry, angry, lonely, or tired will become negative, hostile, critical, and depressed. If a brother is hungry, he must simply ask to eat. If a brother is thirsty, he must simply ask to drink. If a brother is angry, he must examine the cause of his anger and let go of it. It is toxic to hold on to the memory of offenses and to ruminate if, and when, and how many times one has been wronged. If a brother is lonely, he must ask himself if he seeks first the company of Our Lord in the Sacrament of His Divine Friendship; if he is open and transparent with his superiors; and if he is punctual, generous, and attentive to others at work, at recreation, and in all the activities of the common life. And finally, if a brother is tired, he must not conceal it from his superiors, but make it known with honesty and simplicity. The superior may grant the brother more rest or he may, in some cases, if he judges it salutary, may ask the brother to keep to the horarium. In general, dispensations from Compline are not a good idea because a brother is thus deprived of the final blessing of the day. For some brothers, however,  a dispensation from Compline may be just the thing he needs to reset his body clock and get a good rest. The superior, having heard the brother, is the judge of this.

Now, with regard to the second level at which one may read Chapter XXII: there is a certain affinity between this chapter and the parable of the ten virgins in the 25th chapter of Saint Matthew. First, and most obviously in both texts it is a question of sleep.

And the bridegroom tarrying, they all slumbered and slept. (Matthew 25:5)

In both texts it is a question of keeping a light burning in the night.

Then shall the kingdom of heaven be like to ten virgins, who taking their lamps went out to meet the bridegroom and the bride. (Matthew 25:1)

And at midnight there was a cry made: Behold the bridegroom cometh, go ye forth to meet him. Then all those virgins arose and trimmed their lamps. And the foolish said to the wise: Give us of your oil, for our lamps are gone out. The wise answered, saying: Lest perhaps there be not enough for us and for you, go ye rather to them that sell, and buy for yourselves. (Matthew 25:7–9)

In each of us there is, if not a foolish virgin and a wise virgin, a foolish monk and a wise monk. The foolish monk thinks that he can get through the dark night of faith with only a minimal provision of the oil that is prayer. He prays intermittently on the ebb and flow of sentiment. Then he prays less and less. And finally he stops praying, convinces himself that he cannot pray, and so finds himself plunged into darkness without so much as the flicker of a flame in his lamp.

A wise monk knows that if he stops praying, the flickering flame of his faith will go out. He prays not as thinks he ought to be praying, but as he can. Nothing keeps a monk from praying as does the neurosis of perfectionism. The perfectionist says, “If I cannot pray as I think I ought to pray, I shall not pray at all.” Perfectionism often goes hand in hand with procrastination. The perfectionistic procrastinator says, “I will wait until I can pray as I think I ought to pray.” And, in the end, he doesn’t pray at all. The humble man accepts his limitations. Outside of the Divine Office, he may not be able to dedicate long periods of time to prayer, but he seizes upon minutes here or there in his day and lifts his heart and mind to God as best he can. The day will come when he will find himself capable of fifteen, twenty, or even thirty minutes of believing, loving, thanking and adoring God in silence.

On most days, a wise and humble monk reads his psalms, tells his beads, bends his knee before the Most Blessed Sacrament, and waits.

I wait for the Lord, for his word of promise my soul waits; patient my soul waits, as ever watchman that looked for the day. (Psalm 129:5–6)

One does not stop praying because one’s faith is weak. One’s faith is weak because one has stopped praying. Prayer itself is a grace; it is something given freely by God in response to the inarticulate Godward groanings deep inside a man. These inarticulate groanings are themselves secret stirrings of grace. It is the mystery of God drawing a soul toward Himself so that the soul may, in response, begin to draw near to God through prayer. Deus, in adjutorium meum intende; Domine, ad adjuvandum me festina. “O God, come to my assistance; O Lord, make haste to help me” (Psalm 69:2).

The monk is a man whose life, apart from prayer, makes no sense. The interest and chief task of the demons charged with bringing down monks is to get them to stop praying. The little black boy who tormented the monk, who could not stay quietly at his prayer until Saint Benedict struck him, lurks still in every cloister. He is a most hateful little demon because his task is to drain the life out of monks by keeping them from prayer. As efficacious as Saint Benedict’s little exorcising stick is the simplest prayer shot like an arrow out of the heart. Learn the word of the Apostle Saint James: Tristatur aliquis vestrum? oret, “Is any of you sad? Let him pray” (James 5:13). It correspond to Saint Benedict’s pithy injunction in Chapter LII: Simpliciter intret et oret, “Let him go in without a fuss and pray.”