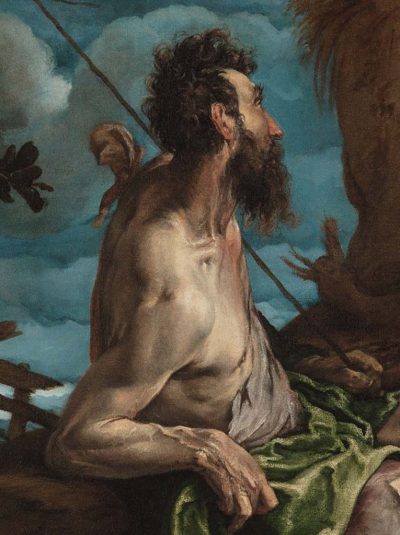 Saint Benedict, following an ancient liturgical tradition, appoints the daily repetition of Psalm 90 to Compline. The key verse is, of course, Non timebis a timore nocturno, “Thou shalt not be afraid of the terror of the night” (Psalm 90:5). In the East, while the same psalm is also prayed at the Office of the Sixth Hour, and this because of its reference to the noonday devil:

A sagitta volante in die, a negotio perambulante in tenebris, ab incursu, et dæmonio meridiano.
Of the arrow that flieth in the day, of the business that walketh about in the dark: of invasion, or of the noonday devil. (Psalm 90:6)

In the Temporal Cycle, Psalm 90 is used extensively on the First Sunday of Lent. In the Introit of the First Sunday of Lent, the conclusion of the psalm becomes the voice of the Eternal Father promising to those who accompany Christ into the desert and into the humiliations of His Passion a share also in the glory of His Resurrection and Ascension. In this particular liturgical use of Psalm 90, the first word is the divine EGO, signifying a divine utterance that may be compared with the voice that spoke to Moses out of the burning bush in “the inner parts of the desert” (Exodus 3:1) on the mountain of God, Horeb. To Moses, God speaks, saying:

And to Church, on the First Sunday of Lent, the Father, speaking of the Son, says:

Invocabit ad me, et EGO exaudiam eum; eripiam eum, et glorificabo eum.
He shall cry  to me, and I will hear him: I will deliver him, and I will glorify him. (Psalm 90:15)

What the Father says concerning the Son is said, in effect, of the whole Christ, Head and members. This does the priestly prayer of Christ in the Cenacle on the night before He suffered, rest upon the solemn promise of the Father—et EGO exaudiam eum— sung on the First Sunday of Lent.

A thousand shall fall at thy side, and ten thousand at thy right hand: but it shall not come nigh thee. But thou shalt consider with thy eyes: and shalt see the reward of the wicked. Because thou, O Lord, art my hope: thou hast made the most High thy refuge. There shall no evil come to thee: nor shall the scourge come near thy dwelling. For he hath given his angels charge over thee; to keep thee in all thy ways. In their hands they shall bear thee up: lest thou dash thy foot against a stone. Thou shalt walk upon the asp and the basilisk: and thou shalt trample under foot the lion and the dragon. (Psalm 90:7-13)

You see, then, that Psalm 90 is related in turn to Moses in the desert, to Saint John the Baptist in desert, to Christ in the desert, and then, in the mystery of the Church prolonging the prayer of Christ in time and participating in His temptations and sufferings, in Saint Anthony of Egypt, in Saint Benedict, and in the monks of every age “driven into the desert” by a mysterious action of the Holy Ghost so that the abode of the demons may be exorcised, and the wastelands made fruitful, and the hours of the night sanctified and protected by the prayer of Christ.