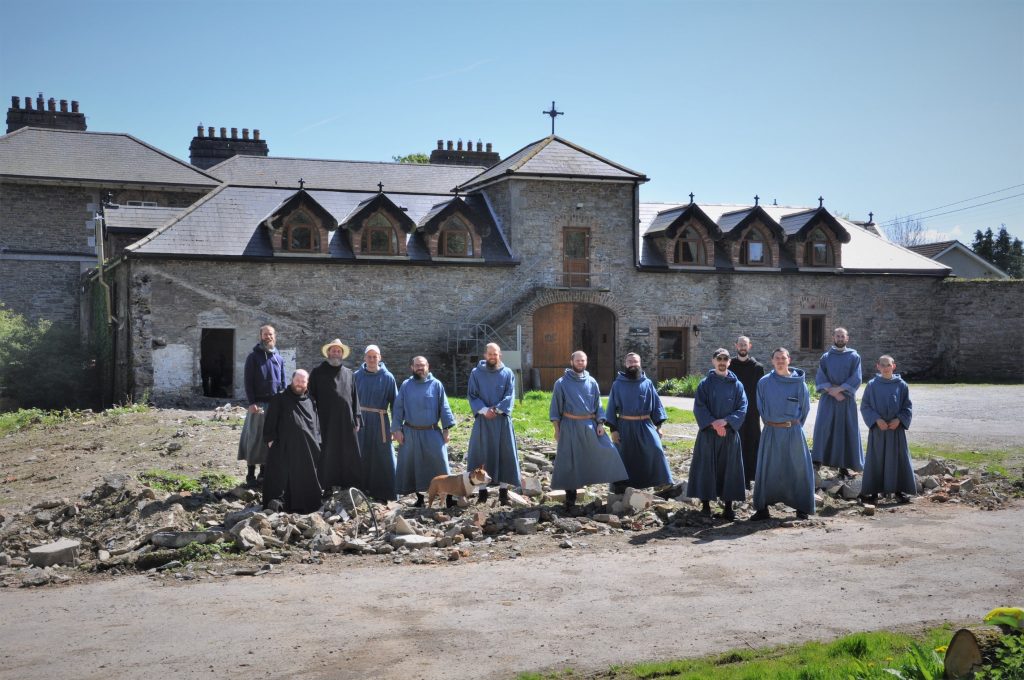 Jan. 1 June. 1 Oct.
The third degree of humility is, that a man for the love of God submit himself to his superior in all obedience; imitating the Lord, of Whom the apostle saith: “He was made obedient even unto death.”

Saint Benedict says that the obedience that a monk shows by submitting himself to his superior is an expression of love for God. In this a monk imitates the obedience of Our Lord, according to His own word to the apostles in the Cenacle on the night before He suffered:

But that the world may know, that I love the Father: and as the Father hath given me commandment, so do I. Arise, let us go hence. (John 14:31)

Jesus reveals to the world His love for the Father by acting only as the Father has commanded Him. His obedience is set in motion by His love for the Father. It is this love that makes him say, Surgite, “Arise, let us go hence.” Why does Saint John give us this particular phrase? It has long been the subject of debate among students of the Fourth Gospel. Some argue that the first part of the discourse may have taken place at Bethany, or at a supper other than the Mystical Supper (so called because it was the occasion of the institution of the Holy Mysteries, that is, of the Most Holy Eucharist) in the Cenacle. Others think that the first part of the discourse did take place during the Mystical Supper and that Jesus, with these words, ended the meal and continued His discourse on the way to the garden of Gethsemani.

I have come to understand these words of Jesus in another way, one that is consonant with the tradition of the Fathers. Would not the injunction, “Arise, let us go hence,” be the completion of what He said upon coming into the world, “Behold I come: in the head of the book it is written of me: that I should do thy will, O God” (Hebrews 10:7)? Would these words of Jesus in the Cenacle not refer to the eagerness with which He goes first to the prayer in Gethsemani, and from there, passing through His capture, trial, scourging, crowning with thorns, and condemnation, to the place of His sacrifice, inviting His apostles to go there with Him? In Saint Luke’s Gospel, Jesus says, “I am come to cast fire on the earth: and what will I, but that it be kindled? And I have a baptism wherewith I am to be baptized: and how am I straitened until it be accomplished?” (Luke 12:49–50). Of all of the Apostles, only John heeded this invitation of Jesus to go with Him even to the place of His sacrifice, to His altar, to His immolation. Oblatus est quia ipse voluit.

He was offered because it was his own will, and he opened not his mouth: he shall be led as a sheep to the slaughter, and shall be dumb as a lamb before his shearer, and he shall not open his mouth. (Isaias 53:7)

I count all things to be but loss for the excellent knowledge of Jesus Christ my Lord; for whom I have suffered the loss of all things, and count them but as dung, that I may gain Christ: and may be found in him, not having my justice, which is of the law, but that which is of the faith of Christ Jesus, which is of God, justice in faith: that I may know him, and the power of his resurrection, and the fellowship of his sufferings, being made conformable to his death. (Philippians 3:8–10)

This is the same spirit that runs through the Epistles of Saint Ignatius of Antioch. Obedience is the martyrdom of the monk, that is, the witness he gives to his love for the Father.

Though I am alive while I write to you, yet I am eager to die. My love has been crucified, and there is no fire in me desiring to be fed; but there is within me a water that lives and speaks, saying to me inwardly, Come to the Father. I have no delight in corruptible food, nor in the pleasures of this life. I desire the bread of God, the heavenly bread, the bread of life, which is the flesh of Jesus Christ, the Son of God, who became afterwards of the seed of David and Abraham; and I desire the drink of God, namely His blood, which is incorruptible love and eternal life. (Epistle of Saint Ignatius to the Romans, Chapter 7)

Yesterday Saint Benedict articulated the second degree of humility around John 6:38, “I came down from heaven, not to do my own will, but the will of him that sent me.” Today, he articulates the third degree of humility around Philippians 2:8. “He humbled himself, becoming obedient unto death, even to the death of the cross.” Every time a brother hesitates to make an act of submission “for the love of God” he retards his union with the obedient Christ. There is no Christ other than the Christus factus obediens usque ad mortem, “Christ made obedient unto death.”

I beseech you therefore, brethren, by the mercy of God, that you present your bodies a living sacrifice, holy, pleasing unto God, your reasonable service. (Romans 12:1)

Benedictine obedience is sacramental. It is an outward act by which a monk unites himself to the Christus obediens, and through which a monk “fills up those things that are wanting of the sufferings of Christ, in his flesh, for the Body of Christ, which is the church” (Colossians 1:24). Benedictine obedience is a consequence of Holy Communion: Christ living in the monk. At the same time every act of obedience is a preparation for Holy Communion. One cannot go to Christ, receive Christ, and remain in Christ while, all the while, closing one’s ears to the voice of the abbot who holds the place of Christ, or showing resistance to one’s superiors, or refusing submission for the love of God. Holy Communion is the food of the humble. It is the food of obedience.  It is by virtue of the Christus obediens living in one’s soul, that a man becomes obedient.

I do not mean by this that one of the consequences of obedience may not be the efficient execution of a task, or a better collaboration with the brethren on a common project, or a contribution to the good order of the monastery. The consequences of obedience may, in fact, be all of these things. It remains, nonetheless, that a son of Saint Benedict sees in submission to his superior an opportunity to express his love for God and a sure means to union with Christ.