Skip to content
HomeRule of Saint BenedictTurn away from thine own will (VII:4) 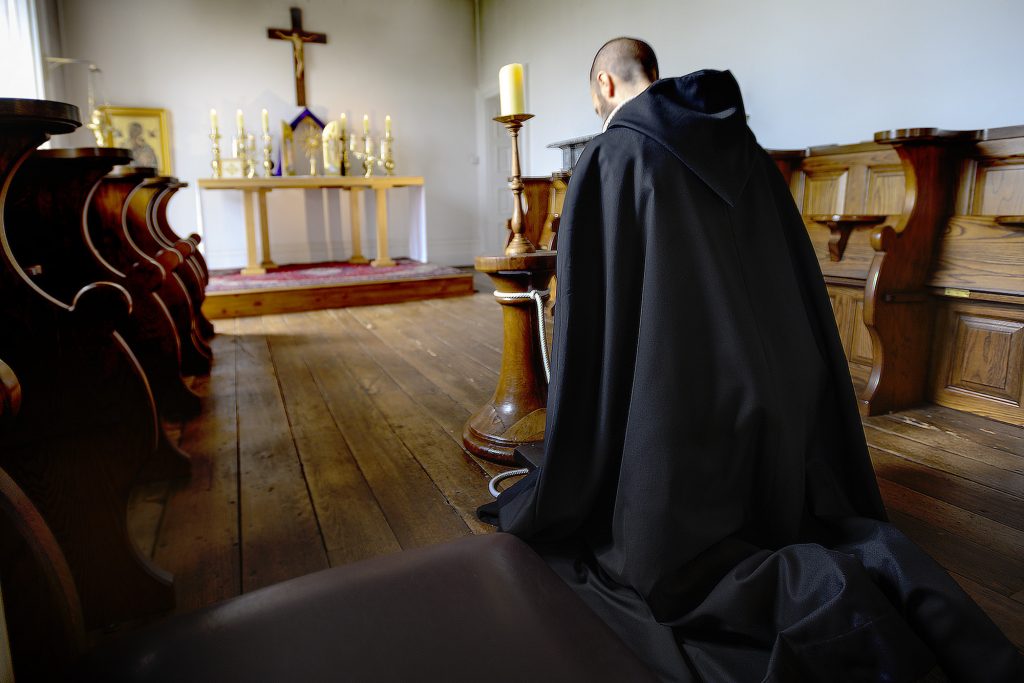 28 Jan. 29 May. 28 Sept.
We are, indeed, forbidden to do our own will by Scripture, which saith to us: turn away from thine own will (Sirach 18:30). And so too we beg of God in prayer that His will may be done in us. Rightly therefore are we taught not to do our own will, if we take heed to the warning of Scripture: “There are ways which to men seem right, but the ends thereof lead to the depths of hell” (Proverbs 14:12); or, again, when we tremble at what is said of the careless: “They are corrupt and have become abominable in their pleasures” (Psalm 13:1). And in regard to the desires of the flesh, we must believe that God is always present to us, as the prophet saith to the Lord: “O Lord, all my desire is before Thee” (Psalm 37:10).”

“Turn away from thine own will” (Sirach 18:30). There you have it: the bottom line. The full passage reads: “Go not after thy lusts, but turn away from thine own will,” which Monsignor Knox gives as, “Do not follow the counsel of appetite; turn thy back on thy own liking.” The principles of the worldly man are turned upside down. The worldly man says, “I want what I like, and I like what I want.” The man who follows blindly his own concupiscences and appetites runs to his own undoing and to certain unhappiness. But the man who holds to his own ideas and desires in matters ascetical and spiritual is in as great a danger as the man who feeds the baser passions. Such as man says obstinately to himself: “I want what I judge right, and what I judge right I want.”

There is a story in the Lives of the Jura Fathers about a monk who clung to his notions about asceticism and so fell into a state of complete prostration. Abbot Lupicinus said to him, “Come, now, dear brother. Put aside your stubborn self–will . . . Imitate what you see me doing, at least in the name of obedience, which no discussion can invalidate.” Abbot Lupicinus ate a hearty meal in the sight of the starving monk, who wanted to live on nothing but bread crumbs, and thus rescued him from his fatal self–will, and restored him to health (Lives of the Jura Fathers, 75). Abbot Lupicinus appeals to the obedience which no discussion can invalidate. There are brothers who are so attached to their self–will and to their own notions of asceticism, and divine worship, and holiness that they will exhaust themselves in discussions and self–justifications rather than turn away from their own will. It remains that no amount of discussion can invalidate obedience, and obedience is the touchstone of humility.

There are men who think that, in coming to the monastery, they are already very near holiness. The mistake is easy enough to make. The average chap who says his prayers, goes to Holy Mass every day, avoids the more egregious vices, pursues the practice of virtue, and reads pious books, may think that he is not far from the Kingdom of God. There are men who think of the monastery as a kind of “finishing school.” Such a man comes to the monastery to put the last touches and flourishes on his hard–won holiness. Then what happens? He either discovers for himself or has to be told that a wrecking ball needs to be taken to what he has painstakingly built. The whole thing has to be razed to the ground. And why? Because the foundation of humility was never laid.

It often happens that a man is judged apt for the monastic life because he is introverted, or because he loves chant, or because he is more at home in a library than on a construction site, or because he has an interest in liturgical antiquarianism, or a degree in theology, or because he has made pilgrimages to the top ten Marian sanctuaries of the world. The introverted chap, should he enter the cloister, will be obliged to relate to others. The chant enthusiast will soon discover the terrible quotidian of a choir where not everyone shares his enthusiasm and where few can rise to his degree of competence. The quiet fellow who spent hours in the library may be asked to serve tea to guests at inconvenient hours, or mow the lawn, or clean out the chicken coops. The earnest chap with a fascination for liturgical antiquarianism will be put in charge of the scullery or sent to help Brother John Baptist “dispatch” chickens. The bright fellow with a degree in theology will be asked to assist the plumber, or the infirmarian, or the cook. And the devout pilgrim of the top ten Marian sanctuaries of the world will find himself enclosed in 35 acres, engaged in the same round of prayer, and work, and reading, with the same group of men, and completely deprived of the pious thrills and frills that kept him going in the world.

Saint Benedict says, “We are, indeed, forbidden to do our own will by Scripture . . . and so too we beg of God in prayer that His will may be done in us.” Saint Benedict sends us to the Pater Noster, which prayer is on the lips of a monk at nearly every waking hour. “Thy will be done on earth as it is in heaven” (Matthew 6:10). Saint Benedict also sends us, implicitly, to the prayer of Jesus in Gethsemani: “My Father, if this chalice may not pass me by, but I must drink it, then thy will be done” (Matthew 26:42). A man may say, “I have no problem with this. I want the will of God in general, but I prefer to keep control of the particulars myself.” Letting go of one’s own will in the particulars is where the monastic struggle becomes real. It is where a man descends from the lofty summits of a vague idealism and allows himself to be converted in the lowly valleys where self–love stakes out its last pockets of resistance.

It is the last sentence of this portion of the First Degree of Humility that makes it possible to live all the rest. The man who goes before Our Lord in the Most Holy Sacrament, saying, “O Lord, all my desire is before Thee,” will find that this prayer brings about a quiet purification of the heart. When he rises from his time of adoration, he will discover that he has left at Our Lord’s feet the desires, and attachments, and certainties that were holding him back from abandonment, from obedience, from the humble acceptance of what is in the present moment. He may even discover that all the desire he laid before Our Lord was somehow burnt up in a flame that leapt out of Our Lord’s Heart to consume it utterly. It remains that this prayer, taken from Psalm 37 — Domine, ante te omne desiderium meum, “Lord, all my desire is before thee” (Psalm 37:10) — can be the beginning of a real conversion of life brought about by grace.