Skip to content
HomeRule of Saint BenedictLet him consider within himself (III:1) 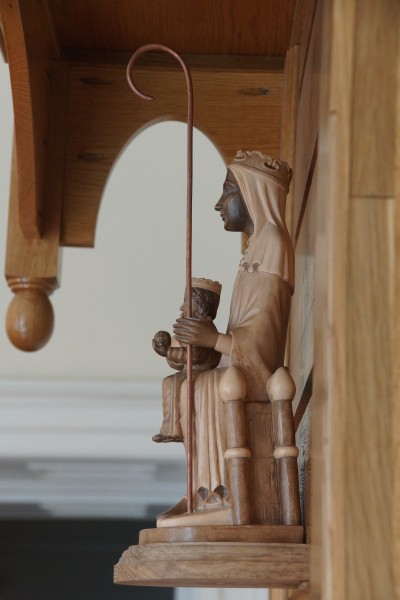 CHAPTER III. Of calling the Brethren to Council
16 Jan. 17 May. 16 Sept.
As often as any important matters have to be transacted in the monastery, let the Abbot call together the whole community, and himself declare what is the question to be settled. And, having heard the counsel of the brethren, let him consider within himself, and then do what he shall judge most expedient. We have said that all should be called to council, because it is often to the younger that the Lord revealeth what is best. But let the brethren give their advice with all subjection and humility, and not presume stubbornly to defend their own opinion; but rather let the matter rest with the Abbot’s discretion, that all may submit to whatever he shall judge to be best. Yet, even as it becometh disciples to obey their master, so doth it behove him to order all things prudently and with justice.

The abbot alone is charged with convening an assembly of the community to address whatever questions need to be settled. The abbot holds the place of Christ in the monastery. He is the monastery’s visible head. He is also the guardian of the unity of the brethren as members of a single body. When he judges it necessary to convene the community in order to treat of anything, the abbot sets forth the matter to be treated. The brethren, for their part, listen to the abbot’s exposition of the matter. Then, it is the turn of the abbot to listen to the brethren. The members listen to the head; and the head listens to the members.

Having done these things, the abbot is to consider the matter within himself. Saint Benedict does not say explicitly that the assembly is dismissed, and then reconvened after the abbot has considered the matter, but such a way of proceding makes good sense. Not all questions can be settled in a single meeting of the community. When Saint Benedict says that the abbot is to treat of the matter with himself — tractet apud se — it is reasonable to suppose that the abbot will want to take the matter to prayer. The abbot may also ask certain of the brethren to pray with him. He may also solicit the prayers of a trusted intercessor.

How does one seek light from Our Lord on a particular question? First of all, one must not go to prayer as a pagan to an oracle; one goes to prayer with profound humility and in a spirit of adoration. It is enough to imitate the faith and hope of the Blessed Virgin who, at the wedding feast of Cana, said simply: “They have no wine” (John 2:3). Or it is enough to say the prayer of Martha and Mary of Bethany” “Lord, behold, he whom thou lovest is sick” (John 11:3). God has no need of complicated expositions and lengthy explanations. There are some souls who think that God needs to be briefed on every issue that arises. There are others who charge themselves with informing Him of every detail, lest He should not have knowledge of all the facts. Our Lord Himself tells us how to pray about things:

But thou when thou shalt pray, enter into thy chamber, and having shut the door, pray to thy Father in secret: and thy Father who seeth in secret will repay thee. And when you are praying, speak not much, as the heathens. For they think that in their much speaking they may be heard. Be not you therefore like to them, for your Father knoweth what is needful for you, before you ask him. (Matthew 6:7–8)

God knows what is needful for the monastery, before the abbot and those united to him in prayer, lay the matter before Him. God wills, all the same, that we should lay the matter before Him, that we should go to Him with our questions, that we should seek His light when all appears dark, and that we should ask Him to open a way before us when there seems to be no way forward. God sometimes answers such a prayer by closing off every attempted solution but one. This has happened to me often in my life, and now, looking back, I thank God for having closed so many doors and blocked so many paths. In His mercy, it often pleased God to reveal His will to me by making it impossible for me to pursue the things that were not in His perfect plan.

Eleven years ago, Our Lord instructed me with words that I would share with you now:

Entrust every care involved in the building of My cenacle [that is, the monastery] to the hands of My most pure Mother. I have charged her with every detail of this work. I want you to be free, free of worry and anxiety, free to respond to My love for you with a love that is joyful and serene.

There will be obstacles, but you will see them melt like ice in the sunlight of My merciful love. Do not linger over obstacles and difficulties; instead surrender them all to Me as they appear. The longer you hold on to them, seeking to resolve them on your own, the more complicated and difficult to solve they will become. Develop the habit of giving Me every obstacle in your path. I am all-loving, all-merciful, and all-powerful, and this is My own work. You are but My instrument. I ask you only to take your place faithfully and peacefully before My Eucharistic Face. I will do all the rest. Believe in My promises, and go forward full of thanksgiving and hope.

I will teach you all that you need to know as you go forward. I will not give you My words ahead of time, but I will give them to you as you need them, at the moment chosen by My loving providence. Renounce the desire to control and arrange things ahead of the time that I have decreed. Each thing has its own moment, and that moment alone and no other brings with it the grace sufficient to your need, to your weakness, and to the task at hand. I am proceeding this way with you because I want you to trust Me completely, to trust Me in all things, great and small.

I have dwelt on this little phrase, tractet apud se, “let him treat of it [the matter at hand] with himself, and then do what is most expedient” because it contains, I think, the most important element of Chapter III. This is not to say that the abbot is wasting time by listening first to the brethren. Quite the contrary! There is, all the same, an order to be followed. First, the abbot presents the question to the brethren. Second, the abbot listens to the counsel of the brethren. And third, the abbot takes the matter to prayer, and waits upon God to open the right path, to close the wrong ones, and to give the assurance of His divine peace. These three steps, followed faithfully and in their right order, will always lead to a solution, even of the thorniest questions.