Skip to content
HomeMost Holy Sacrament of the AltarI came down from heaven (VII:6) 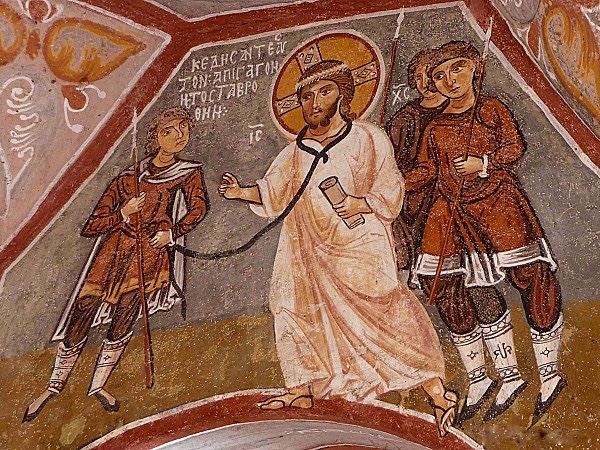 Jan. 31 May. 30 Sept.
The second degree of humility is, that a man love not his own will, nor delight in fulfilling his own desires; but carry out in his deeds that saying of the Lord: “I came not to do mine own will, but the will of Him Who sent me” (John 6:38). And again Scripture saith: “Self-will hath punishment, but necessity wins the crown.”

John 6:38 is at the heart of the Discourse on the Bread of Life. Our Lord says, “I came down”, descendi. One seems to hear in this word the fulfilment of that other divine utterance addressed to Moses on Horeb, the mountain of God:

And the Lord said to him: I have seen the affliction of my people in Egypt, and I have heard their cry because of the rigour of them that are over the works: And knowing their sorrow, I am come down (descendi) to deliver them out of the hands of the Egyptians, and to bring them out of that land into a good and spacious land, into a land that floweth with milk and honey. (Exodus 3:7–8)

Is this not what we confess in the Credo of the Mass when we sing, Qui propter nos hómines et propter nostram salútem descéndit de coelis, “Who, for us men, and for our salvation, came down from heaven”? This “coming down” of the Word left the Angels in astonishment, even as the glorious Ascension of the Lord in “the substance of frail human nature which He had taken to Himself” (Communicantes of the Ascension) astonished the angels, causing them to cry out:

At the end of every Holy Mass in the reading of the Prologue of the Fourth Gospel, we genuflect in adoration of the “coming down” of the Word:

And the Word was made flesh, and dwelt among us, and we saw his glory, the glory as it were of the only begotten of the Father, full of grace and truth. (John 1:14)

Saint Paul sings of the same mystery: the coming down of God, the self–emptying of God, the ennothingment of God. And the Apostle completes this by his confession of the glorious Ascension of the Lord. I give you Monsignor Knox’s translation of the text; he has a way of “Englishing” the thought of the Apostle in a most compelling way:

His nature is, from the first, divine, and yet he did not see, in the rank of Godhead, a prize to be coveted; he dispossessed himself, and took the nature of a slave, fashioned in the likeness of men, and presenting himself to us in human form; and then he lowered his own dignity, accepted an obedience which brought him to death, death on a cross. That is why God has raised him to such a height, given him that name which is greater than any other name; so that everything in heaven and on earth and under the earth must bend the knee before the name of Jesus, and every tongue must confess Jesus Christ as the Lord, dwelling in the glory of God the Father. (Philippians 2:6–11).

The Fathers and Doctors of the Church, and the mystics of the Church shaped by Sacred Scripture and by the liturgy, either exhaust the potentialities of human language, or yield to the poetic instinct, or fall silent in adoration before the mystery of God who comes down, who descends so very low, and makes Himself so very little. First there is the descent from the bosom of the Father into the womb of the Blessed Virgin Mary. Saint Thomas Aquinas sings of it in his hymn for Lauds of the feast of Corpus Christi:

The heavenly Word proceeding forth,
yet not leaving the Father’s side,
went forth upon His work on earth
and reached at length life’s eventide.

The second degree of humility tell us this: that the Most Holy Eucharist is the food of the humble. By this I do not mean that a man already humble partakes of it; I mean, rather, that the man who partakes of the Most Holy Eucharist will become humble, for one cannot eat and drink the adorable Body and precious Blood of Our Lord without participating thereby in the mystery of His dispossession, His self–emptying, the unfathomable spiral of His descents. This is what Mother Mectilde calls our participation in the anéantissement, the ennothingment of the Host.