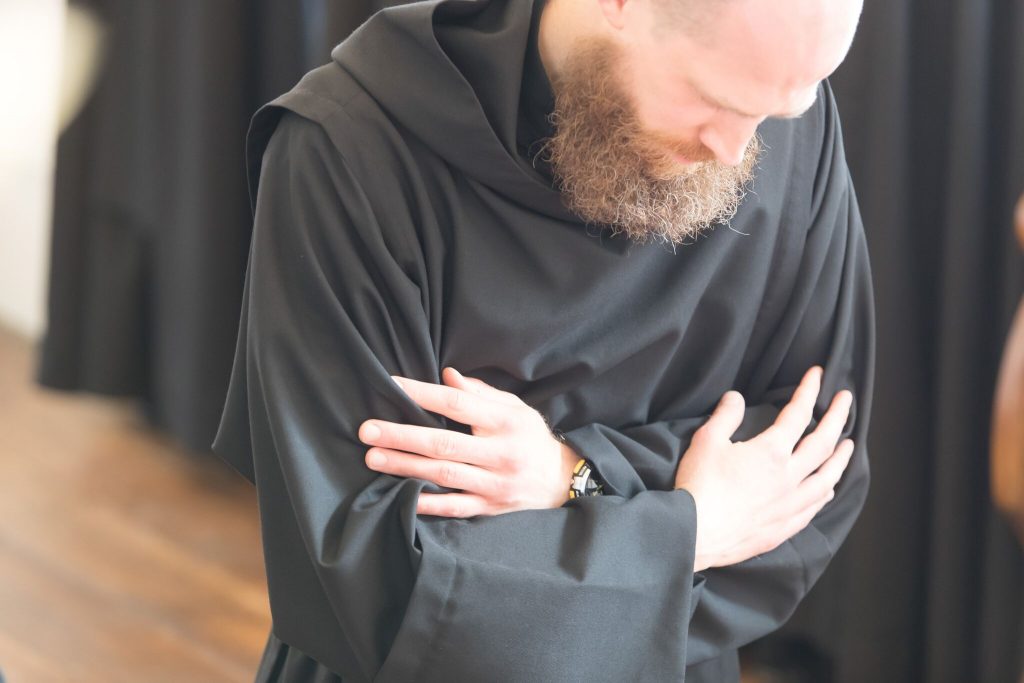 CHAPTER V. Of Obedience
22 Jan. 23 May. 22 Sept.
The first degree of humility is obedience without delay. This becometh those who hold nothing dearer to them than Christ, and who on account of the holy servitude which they have taken upon them, either for fear of hell or for the glory of life everlasting, as soon as anything is ordered by the superior, suffer no more delay in doing it than if it had been commanded by God Himself. It is of these that the Lord saith: “At the hearing of the ear he hath obeyed Me.” And again, to teachers He saith: “He that heareth you heareth Me.”

Obedience without delay is an expression, first of all, of humility. The prideful man stops to scrutinize the order given him. He weighs it, analyses it, and measures it against his own perceptions and his own assessment of it. He argues that the order given is not opportune, or will take too much time, or would best be left to later. This leads to foot–dragging and to one delay after another. Foot–dragging is not Benedictine. The obedience that Saint Benedict would see in his sons is characterised by alacrity. It is a generous and costly obedience: an obedience that detaches a man from his own priorities and pursuits. Saint Benedict says that the obedient monk will leave immediately his own occupations, forsaking his own will. It is this forsaking of one’s own will that makes obedience so costly and thus so precious an expression of love for Christ.

Saint Benedict says that obedience without delay befits the man who holds nothing dearer than Christ. For Saint Benedict, obedience is an expression of love for Christ. It is the most concrete way a monk has of putting into practice the 21st instrument of good works: “To prefer nothing to the love of Christ.” Haec convenit his qui nihil sibi a Christo carius aliquid existimant. There are men who prefer Christ to all else in theory. They like the idea of preferring nothing to the love of Christ. Thinking about the notion makes them feel holy. Such men are comfortable with the theory of obedience without delay. They have lofty notions of it and in their heads run films of the Life of Little Saint Placid, casting themselves in the leading role, but as soon as their interests, their preferences, or their preoccupations must be sacrificed to an inconvenient act of obedience, the spring goes out of their step, the glint goes out of their eyes, and all their pious enthusiasm is extinguished.

Saint Benedict gives us in the first and second sentences of Chapter V one of the secrets of the pax benedictina. His secret is very close to the Little Way of Saint Thérèse: it is, in effect, to make of every act of obedience an expression of love for Christ. “I do this for Thee, Lord Jesus, and I do it straightaway and without delay.” The fruit of such acts of obedience is an immediate increase of love for Christ, a fresh inpouring of grace, and peace and joy in the Holy Ghost. The man who drags his feet, or procrastinates, or looks for reasons to justify his hesitations misses the opportunity to show Christ a costly love. He fails to recognise the sacrament of the present moment that contains within itself a grace that will not be offered him again.

At the centre of Chapter V, Saint Benedict places this word of Christ from the 6th chapter of Saint John: “I came down from heaven, not to do my own will, but the will of him that sent me” (John 6:38). Our Lord utters these words in the context of His discourse on the Bread of Life. The Most Holy Eucharist is the supreme fruit of the obedience of Our Lord. When, Our Lord, in coming into the world says, Ecce venio, “Behold I come: in the head of the book it is written of me: that I should do thy will, O God” (Hebrews 10:7), He has in view not only the Incarnation and Redemption, but also the mystery of the Most Holy Eucharist, by which He makes Himself present, and offers Himself to the Father, and gives Himself in the form of food and drink to His Church.  Monastic obedience is a kind of sacrament by which we participate in the obedience of Christ to the Father: the very obedience by which He became man, suffered His Passion, died on the Cross, rose from the dead, ascended into glory and abides hidden, until the end of time, in the Most Holy Sacrament of the Altar. The Sacred Host is the shining icon of the obedience of Christ who “humbled himself, becoming obedient unto death, even to the death of the cross” (Philippians 2:8). The Sacred Host reveals to us what Mother Mectilde, following Saint Paul in Philippians 2:7 calls the exinanition (anéantissement) of Christ: His self–emptying, His ennothingment. And the obedience of Christ is what saves the world. It is what conquers death by death, giving life to those in the tombs. Every act of obedience is an opportunity to unite oneself to the Sacred Host, and to participate in His own work of redemption. And Holy Communion is the food of obedience, the food of love.