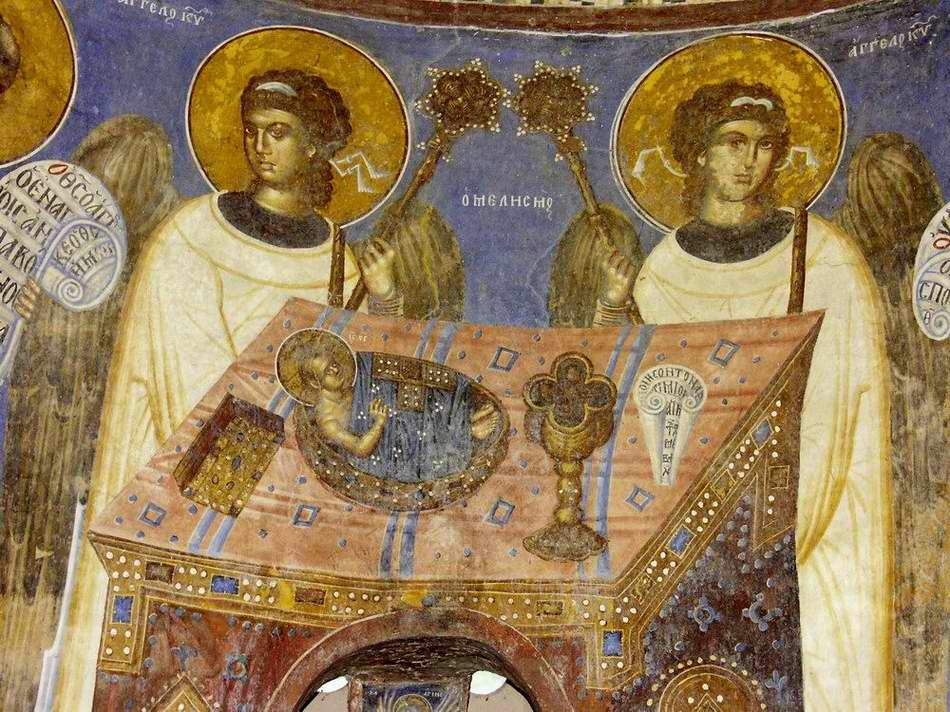 The august Sacrament of the Altar [is] the mystery that contains within itself all the other mysteries of His holy life. For this reason, you can adore there the little Child of the manger; you can adore Him together with the Holy Kings and you can say, even as they did, “We have seen his star in the east, and are come to adore him” (Matthew 2:2). [Mother Mectilde de Bar, Epiphany Conference 1694]

Dr Ellen Macrina Gryniewicz, the mother of our brother, Dom Chrysostom M. Gryniewicz, made her Benedictine Oblation for Silverstream Priory in the course of Holy Mass on the first day of the Octave of the Epiphany, 7 January 2019. Father Prior pronounced the following homily:

My dear daughter, Ellen — Sister Macrina — in becoming a Benedictine Oblate of this monastery, you are adopted not only into the family of the sons and daughters of our glorious patriarch, Saint Benedict, but also into the spiritual progeny of one of the 17th century’s most incandescent spiritual figures, Mother Mectilde of the Blessed Sacrament. Mother Mectilde gave one of her most important conferences on the vigil of the Epiphany, 1694. The great lady would have been eighty years old at the time; this particular conference represents her thought in its maturity. The message of Mother Mectilde speaks to the heart of anyone called by God to a life of adoration.

Mother Mectilde affirms, first of all, that the Most Holy Eucharist contains all the mysteries of Christ or, if you will —to use the expression of Blessed Abbot Marmion’s classic book — contains Christ in His mysteries. Mother Mectilde says:

The august Sacrament of the Altar [is] the mystery that contains within itself all the other mysteries of His holy life. For this reason, you can adore there the little Child of the manger; you can adore Him together with the Holy Kings and you can say, even as they did, “We have seen his star in the east, and are come to adore him” (Matthew 2:2).

Mother Mectilde relates the grandeur of the heavenly liturgy in all its perfection to the vocation of those whom God has chosen to adore Him in spirit and in truth here below. Addressing God, Mother Mectilde says, “Thou didst will that we should share with [the Angels] the honour of adoring Thee continually, beginning in this world what we will do for all eternity.” Such is your vocation as an Oblate of Silverstream Priory.

Mother Mectilde further relates adoration to the immolation of the victim made over to God in sacrifice. Sacrifice is, in fact, the supreme expression of adoration. One cannot adore in spirit and in truth while withholding something of oneself from God. One’s whole self must be surrendered in a sacrificial holocaust in order for one’s adoration to be what God would have it be. For this reason did the Father give us the sacrifice of the Son — the pure Victim, the holy Victim, the spotless Victim (as the Roman Canon puts it) — as the pattern of adoration to be reproduced in all who belong to Him, and this by the power of the Holy Ghost. This goes the very heart of what it means to become an Oblate: one offered, one made over entirely to God with the host laid upon the corporal and with the wine mixed with a drop of water in the chalice.

One of the most remarkable characteristics of Mother Mectilde’s teaching is her conviction that all the baptized are called to holiness: something that you and Tom have understood from the beginning of your marriage and the beginning of your family. The life of perpetual adoration is not for a coterie of elite souls; it belongs to the life of all who, being baptized into Christ’s death and resurrection, are called to become the adorers in spirit and in truth whom the Father seeks (John 4:23). What Mother Mectilde brings to this is a compelling invitation to a life of victimhood, that is, of identificati0n with the Host, the Lamb of God immolated from before the foundation of the world, sacrificed in an unbloody manner on the altars of the Church from the rising of the sun to its setting, and hidden in her tabernacles.

Mother Mectilde’s teaching corresponds to that of Saint Paul: “Whatever you are about, in word and action alike, invoke always the name of the Lord Jesus Christ, offering your thanks to God the Father through him” (Colossians 3:17). Mother Mectilde’s insistence on the victimal character of the Christian life is a uncompromising and wholehearted response to Saint Paul’s injunction to the Romans: “And now, brethren, I appeal to you by God’s mercies to offer up your bodies as a living sacrifice, consecrated to God and worthy of his acceptance; this is the worship due from you as rational creatures” (Romans 12:1). Mother Mectilde’s ideal of perpetual adoration is addressed as much to you, an Oblate living in the world, as it is to us, monks living within the enclosure of the monastery. She says:

To adore continually it is not necessary to say, “My God, I adore Thee.” It is enough to tend inwardly to God [who is] present, to maintain a profound respect out of reverence for His greatness, believing that He is in us as He truly is. In fact, the Most Holy Trinity dwells in us: the Father acts and operates there with His power, the Son with His wisdom, and the Holy Spirit with His goodness. It is, therefore, in the intimacy of your soul, where the God of majesty abides, that you must adore Him continually.

A life of adoration here below is a foretaste of heaven. One who adores perpetually in this life, who adores with every breath and every heartbeat, is doing already what he will do eternally in heaven. Here one adores in the darkness of faith; there it will be in the light of glory.