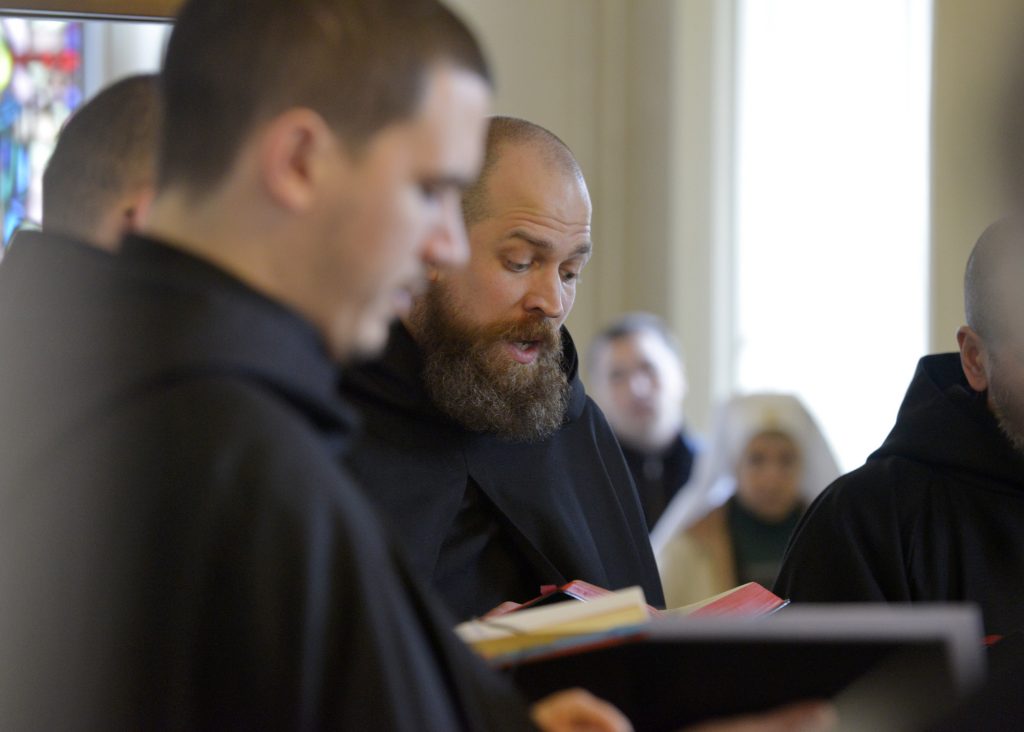 CHAPTER XLVII. Of signifying the hour for the Work of God
27 Mar. 27 July. 26 Nov.
Let the announcing of the hour for the Work of God, both by day and night, be the Abbot’s care: either by signifying it himself, or by entrusting the duty to such a careful brother, that all things may be done at the appointed times. Let the Psalms and antiphons be intoned by those whose duty it is, each in his order, after the Abbot. Let no one presume to sing or to read except such as can so perform the office that the hearers may be edified. And let it be done with humility, gravity, and awe, and by those whom the Abbot hath appointed.

In Saint Benedict’s day, time–keeping was not a simple matter. There were no modern electronic or digital clocks. There was the water–clock, and the hour–glass, and, when the sun was shining, there was the sundial. All the same, the rhythm of the monastic day had to be observed exactly and the time of the Hours announced punctually. Saint Benedict charges the abbot himself or a diligent brother chosen by the abbot with summoning the monks to choir for the Opus Dei. We are blessed to have D. Finnian, a model of regularity, who has been our faithful bell–ringer almost from the very beginning of the monastery.

In Egypt, at the time of Saint Pachomius, the monks were summoned to choir with the blast of a trumpet. Saint Pachomius himself is known to have blown the trumpet to call his monks to church. It would seem that, already, by the time of Saint Benedict, bells were used in Italy. The Church confers great dignity upon the bells used to call the faithful to divine worship. The prayers used for the so–called “baptism of bells” merit special attention. Here, for example, is the prayer of blessing for the water with which the new bell is washed:

Bless this water, O Lord, with a blessing from heaven, and may the virtue of the Holy Spirit come down upon it, that when this vessel, which is prepared for summoning the children of Holy Church, hath been moistened with it, wherever this bell may sound, may the power of those who lie in ambush, the shadow of apparitions, the attack of whirlwinds, the striking of lightning, the ruin of thunderbolts, the calamity of tempests, and all spirits of storms be scared away; and when the children of Christians hear its ringing, may devotion grow within them, that, hastening to the bosom of Holy Mother Church, they may there sing unto Thee in the assembly of the Saints a new canticle, introducing in their music the stirring sound of the trumpet, the sweet notes of the psaltery, the harmony of the organ, the cheerfulness of the drum and the gladness of the cymbal: so that by their prayers and worship they may invite to join them the multitude of the Angelic hosts who dwell in the holy temple of Thy glory.

Another prayer from the same rite describes the manifold blessings that come with the ringing of a church bell:

O Almighty Ruler, Christ, who, when sleeping in the ship according to the needs of that nature which Thou didst assume, didst awake, and instantly calm the sudden storm, so now do Thou graciously come to the help of Thy people in their necessities: spread over this bell the dew of the Holy Spirit, that the enemy of all good may ever flee before its sound; the Christian people be invited to profess their faith; the hostile army be scared away, and Thy people, in obedience to its call, be strengthened in the Lord; and may the Holy Spirit, charmed as by David’s harp, come down from on high; and as, when Samuel was offering up a suckling lamb as a holocaust to the Ruler of the everlasting kingdom, the thunder of the skies drove back the crowd of his assailants, so, whilst the sound of this vessel travels through the clouds, may the bands of Angel save the assembly of the Church and may Thy ceaseless protection guard the fruits, the minds and the bodies of those who believe in Thee.

The signal for the Divine Office announces a moment of grace, a return to God, a summons to that for which we were created:

Come let us praise the Lord with joy: let us joyfully sing to God our saviour. Let us come before his presence with thanksgiving; and make a joyful noise to him with psalms. (Psalm 94:1–2)

One can speak of the missionary vocation of the monastery bell. The bells of a monastery are a tool of evangelisation. Those who, increasingly in the secular culture, seek to silence the bells of church and monastery are, in effect, closing their ears to a preaching of the Gospel. To the ears of the faithful and, even, to the ears of unbelievers, the sound of the bell echoes the voice of Christ calling men to Himself.

And on the last, and great day of the festivity, Jesus stood and cried, saying: If any man thirst, let him come to me, and drink. (John 7:37)

In this same chapter on the signal for the Divine Office, Saint Benedict gives details not addressed in the liturgical directory (i.e., Chapters VIII—XX).

Let the Psalms and antiphons be intoned by those whose duty it is, each in his order, after the Abbot. Let no one presume to sing or to read except such as can so perform the office that the hearers may be edified. And let it be done with humility, gravity, and awe, and by those whom the Abbot hath appointed.

We monks do not speak out, pray, and sing each one according to his private inspiration. The monastic choir is a single hierarchically ordered body. The Opus Dei glorifies God, who orders “all things in measure, and number, and weight” (Wisdom 11:23). The choir is made up of cantantes (chanters), legentes (readers), and audientes (listeners). Of these, the audientes are the object of the beatitude that Our Lord pronounces in the Gospel of the Mass of the Blessed Virgin Mary on Saturday: “Yea rather, blessed are they who hear the word of God, and keep it” (Luke 11:28). The gift of chanting and of reading is not given in equal measure to all, the abbot being the judge of each brother’s competencies. To all who ask for it, however, Our Lord will grant the gift of a listening heart. The brother who hears the word of God and keeps it enters into a particular affinity with the Immaculate Heart of Mary. He will, over time, begin to say at the Divine Office and in all of life: “Let it be unto me according to thy word” (Luke 1:38).