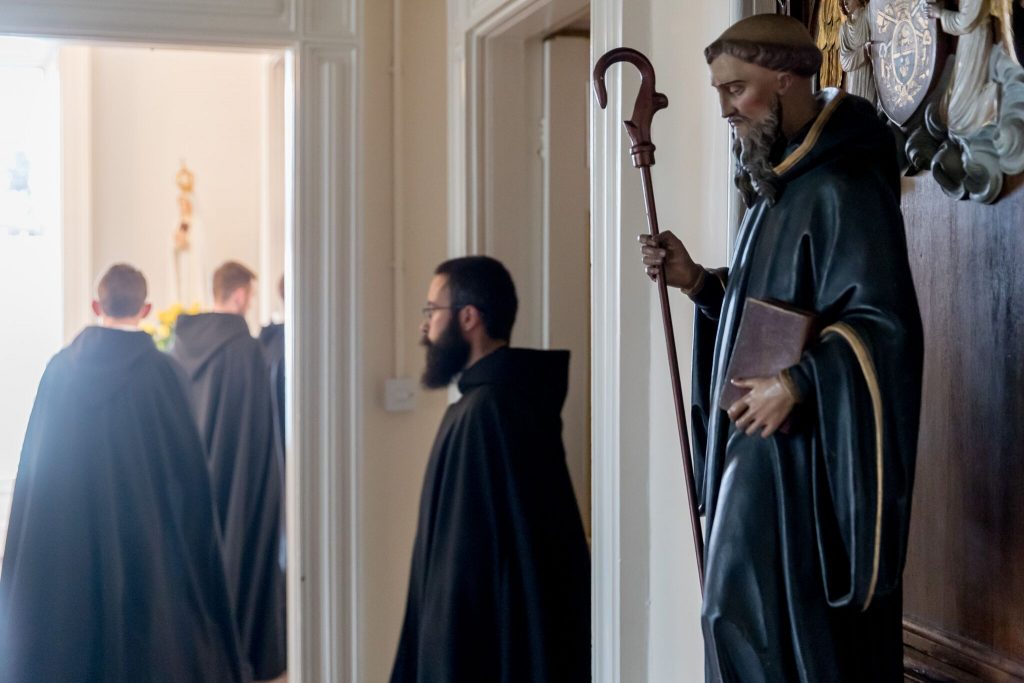 For Saint Benedict, a name is not a mere social convention, nor is it a convenient designation; how one is named matters because it calls forth what one is in the plan of God and in the Body of Christ. All the fathers in Sacred Scripture, from Adam to Saint Joseph, point to Christ. Adam is the father of mankind. Noah is the second father of mankind. Abraham is the father of all believers and the first of the patriarchs. The Jews give the name of father to Abraham, Isaac, and Jacob. In her Magnificat, the Blessed Virgin Mary sings:

He has protected his servant Israel, keeping his merciful design in remembrance, according to the promise which he made to our forefathers, Abraham and his posterity for evermore. (Luke 1:54–55)

Saint Joseph, the spouse of the Blessed Virgin Mary was prepared by God to be the foster–father of Our Lord. The Father from whom all fatherhood in heaven and on earth takes its name (Ephesians 3:15) filled Saint Joseph with all the gifts of nature and grace necessary to his mission. The fatherhood of God shone upon the face of Saint Joseph. Jesus, in looking upon Saint Joseph, rejoiced to see in him the reflection of His heavenly Father.

And so the child grew and came to his strength, full of wisdom; and the grace of God rested upon him.  (Luke 2:40)

After the call of the apostles, the paternal qualities of Our Lord’s Sacred Humanity emerged in all their perfection. Thus did the apostles begin to relate to Our Lord not only as disciples to a master, but also as sons to their father.

Our Lord Jesus Christ was, in effect, a father to the apostles. He was a father to all whom He drew to Himself, giving them life by His word and, when His hour came, nourishing them with His adorable Body and Blood. The abbot of the monastery participates in the fatherhood of Christ. He does this, according to our Declarations, in three ways:

(1) as a SHEPHERD, he will look after the souls and bodies of his monks with a compassionate attention to the needs and infirmities of each one; (2) as a DOCTOR, he will, in complete fidelity to the magisterium of the Supreme Pontiff, regularly nourish the community with teachings derived from Sacred Scripture, the Liturgy of the Church, and the writings of her fathers, doctors, and mystics; and (3) as a PRIEST, he will preside at the Divine Office, the Holy Sacrifice of the Mass, and the celebration of the Sacraments with dignity, attention, and devotion, and will promote the fullest possible development of the liturgical life of the monastery.

The abbot does not exercise his paternal authority in order to keep his monks in subjection, nor to infantilize them, nor to impede their growth. Just as in the natural order, a father rejoices to see his son become a father, so too does an abbot foster the growth of his sons into fatherhood. The fatherhood of a monk expresses itself in many ways, but always and principally through the gift of himself to God in prayer, and through the gift of himself, in obedience, to the service of his brethren, and to the works entrusted to him. The fully mature man, the complete man, is a father. The monk is not frustrated of the fatherhood that is inscribed in his very nature as a man; he grows into a mysterious fatherhood in the order of grace, first by entering into the spousal sacrifice of Christ for His bride, the Church, and then, by laying down his life for the children raised up for him by God. The diocesan priest, the canon regular, or the friar may see evidence of his paternity in the souls entrusted to him, but the cloistered monk lives out his fatherhood in silence and in hiddenness, believing that God will not allow the sacrifice of his life to be fruitless. He will often recall the words of the Apostle: