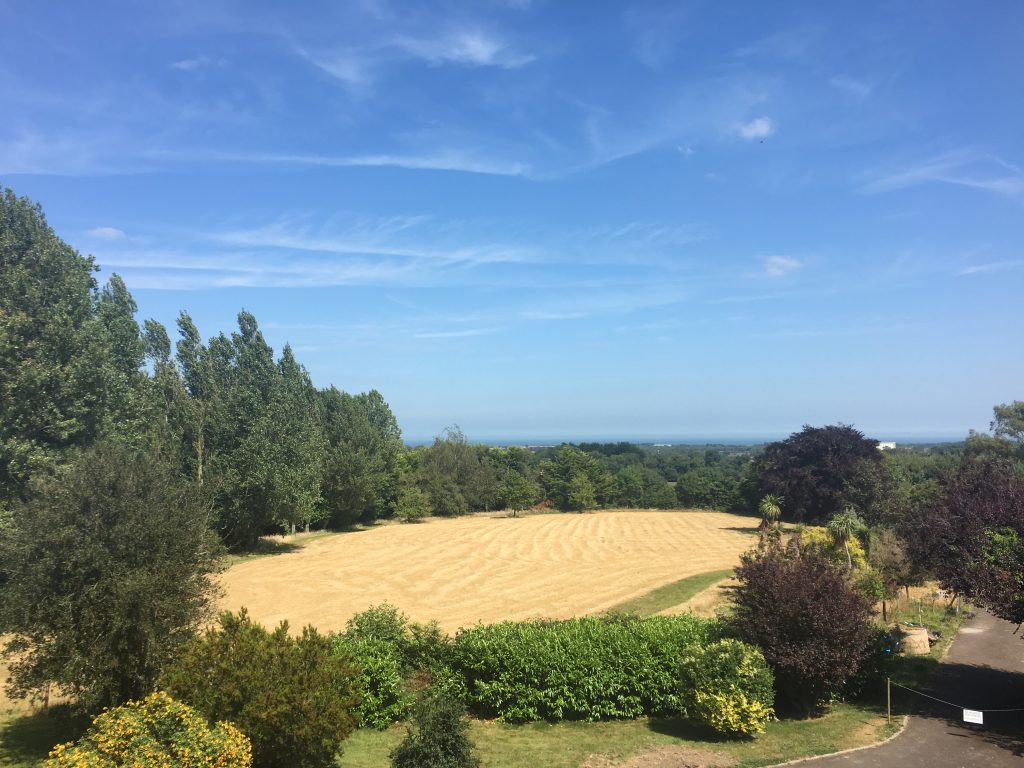 View across a field of Silverstream Priory, Co. Meath

Suscepimus, Deus, misericordiam tuam in medio templi tui.
We have received Thy mercy, O God, in the midst of Thy temple. (Psalm 47:10)

The Introit of today’s Mass begins with a great open interval on the word Suscepimus; it expresses a kind of opening wide to the mercy of the Father that descends from above. It is noteworthy that these words are sung, not at the moment of Holy Communion, as one might think but, at the very beginning of Holy Mass. The Introit suggests that while we  are yet on the way, our Father comes to meet us. The parable of the Prodigal Son comes to mind:

And rising up he came to his father. And when he was yet a great way off, his father saw him, and was moved with compassion, and running to him fell upon his neck, and kissed him. (Luke 15:18–20)

No man can come to me, except the Father, who hath sent me, draw him; and I will raise him up in the last day. It is written in the prophets: And they shall all be taught of God. Every one that hath heard of the Father, and hath learned, cometh to me. (John 6:44–45

The mercy of which we sing in the Introit is the mercy of the Father sent down to us in the Son. Saint Bernard express this most poignantly:

Behold, God has sent down to earth a bag bulging with his mercy, a bag that, at the passion, is torn open so that our ransom pours out of it onto us. A small bag, perhaps, but a full one: for it was a small child that was given to us, but in him dwells all the fullness of the Godhead. (Sermo I, In Epiphania Domini, 1-2: PL 133,141-143)

No man hath seen God at any time: the only begotten Son who is in the bosom of the Father, he hath declared him. (John 1:18)

Every day at the end of Holy Mass, in the Last Gospel, we recall and, mysteriously, live anew the mission of the Son come into the world to reveal His Father:

The single greatest tragedy that can befall a soul is not to have known the Son, nor to have received Him, nor to have believed in His Name. Such a soul goes through life and can even, alas, go into death, not knowing the Fatherhood of God. The mission of the Son is to reveal the Father. In drawing us to Himself, the Son draws us after Him and with Him into the bosom of the Father.

The Fatherhood of God is the great unpreached mystery, the unannounced Good News, the secret that the whole world is waiting to hear. At the beginning of the last century, the Holy Ghost raised up saints to make known again the Fatherhood of God. I am thinking of Saint Thérèse of the Child Jesus and of the Holy Face; in a time and religious culture that had obscured God the Father, Saint Thérèse began to speak of Him with the most disarming and winning simplicity. And I am thinking of Ireland’s own Benedictine Doctor of Divine Adoption, Blessed Abbot Columba Marmion. No one preached and wrote of the Fatherhood of God as did Blessed Marmion. Even today, his writings wake souls to the grace of divine adoption and move them to go to God as children to their father, with unbounded confidence, with reverence, and with the certainty of being heard. The individual piety of too many Catholics, even today, remains estranged from the Father.  Every descent into sin begins in an alienation from the Father; and every recovery and resurrection from sin begins in the cry from the heart of which Saint Paul speaks into today’s Epistle: Abba, Father! The Apostle says:

As a priest, I am conscious each day that God created me to go the altar and to utter these words: Te igitur clementissime Pater, “To Thee, therefore, most merciful Father”. The priest is, before all else, the man who goes to the altar and, in a mysterious and real identification with the Only–Begotten Son, says, “Father”. When the faithful see the priest standing at the altar after the Sanctus, they must know that he is there to say, Pater . . . clementissme Pater. Father . . . most merciful Father. What deeper participation in the Holy Sacrifice is there than to unite oneself to these humble and glorious words uttered on behalf of all and for all?

If you would participate fruitfully in the Holy Sacrifice of the Mass, ask the Holy Ghost to remove from your heart every lack of confidence in the Father’s surpassing love, every doubt, every fear of being forsaken, or cruelly punished, or turned away. Ask the Holy Ghost to infuse you instead with a spirit of trust in the Father, with confidence in His paternal love, and with a humble security that nothing will be able to shake or trouble. Do this, and you will be able to sing with all assurance: Suscepimus, Deus, misericordiam tuam in medio templi tui. “We have received Thy mercy, O God, in the midst of Thy temple” (Psalm 47:10).

FATHER, I willingly abandon every plan of my own devising,
and offer myself to Thee
for the fulfillment of Thy perfect plan,
the plan conceived in love,
that is Thine.
I lay aside my will,
twisted by sin
and so often in conflict with Thy Will,
to enter with all my heart
into the prayer of Jesus in Gethsemani:
FATHER, not my will, but Thine be done.
By the inpouring of the Holy Ghost,
banish from my soul
all fear and insecurity,
all doubt and cowardice.
Fill me, instead, with a filial piety:
one that is confident, and tender, and unwavering.
To Thy mercy
I surrender my past
with its burden of sin.
To Thy glory
I offer the present moment
in thanksgiving and in praise.
To Thy sweet providence,
I entrust the future
and all it holds.
Thou art my FATHER
and Thou hast made me Thine own adopted son.
Grant that I may live, henceforth,
in the grace of this divine adoption,
by casting myself upon Thy paternal Heart,
and by experiencing
through Jesus,
with Jesus,
and in Jesus
what it is to have a FATHER Who is God,
and a GOD Who is Father.