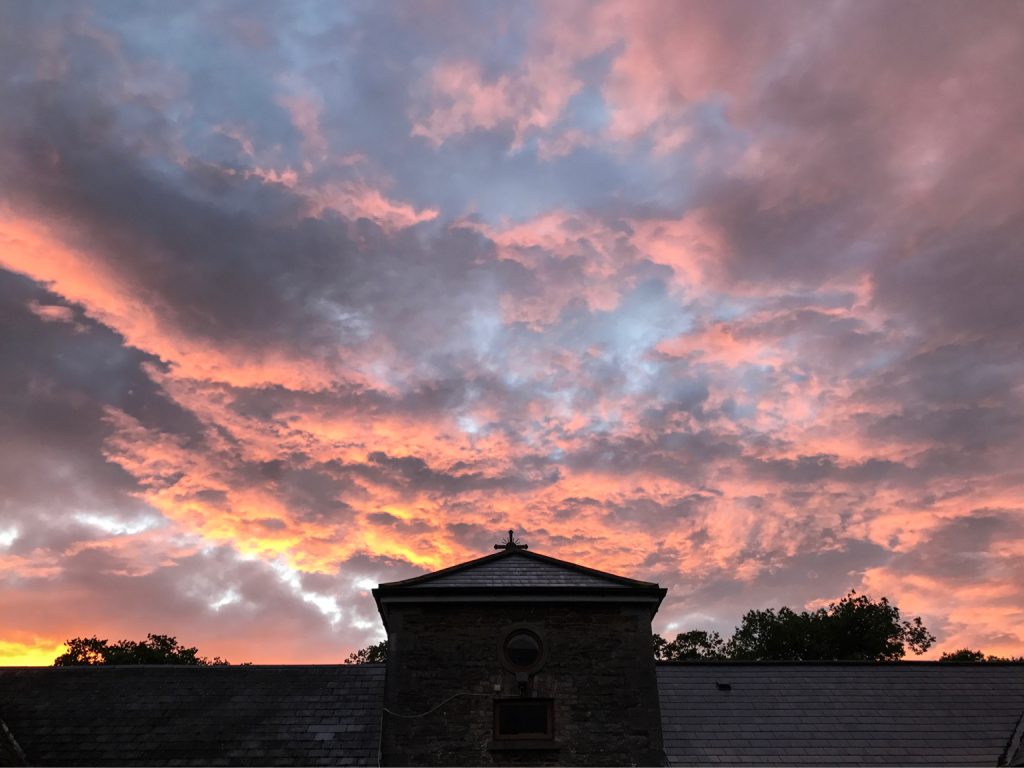 CHAPTER X. How the Night-Office is to be said in Summer Time
12 Feb. 13 June. 13 Oct.
From Easter to the first of November let the same number of Psalms be recited as prescribed above; only that no lessons are to be read from the book, on account of the shortness of the night: but instead of those three lessons let one from the Old Testament be said by heart, followed by a short responsory, and the rest as before laid down; so that never less than twelve Psalms, not counting the third and ninety-fourth, be said at the Night-Office.

Saint Benedict takes care to set a fixed number of psalms for the Night Office from which it is never permitted to derogate. He opens the Chapter by saying,”let the same number of Psalms be recited as prescribed above,” and, after setting forth practical accommodations to the shortness of the nights in summer, he concludes, “so that never less than twelve Psalms, not counting the third and ninety-fourth, be said at the Night-Office”. Although Saint Benedict does not hesitate to divide the longer psalms in order to arrive at the fixed number of twelve, he respects the tradition of the angelic intervention by which the Fathers were instructed to hold to this number. Saint John Cassian relates the event in his Institutes:

At that time, therefore, when the perfection of the primitive Church remained unbroken, and was still preserved fresh in the memory by their followers and successors, and when the fervent faith of the few had not yet grown lukewarm by being dispersed among the many, the venerable fathers with watchful care made provision for those to come after them, and met together to discuss what plan should be adopted for the daily worship throughout the whole body of the brethren; that they might hand on to those who should succeed them a legacy of piety and peace that was free from all dispute and dissension, for they were afraid that in regard of the daily services some difference or dispute might arise among those who joined together in the same worship, and at some time or other it might send forth a poisonous root of error or jealousy or schism among those who came after. And when each man in proportion to his own fervour—and unmindful of the weakness of others—thought that what should be appointed was that which he judged quite easy by considering his own faith and strength, taking too little account of what would be possible for the great mass of the brethren in general (wherein a very large proportion of weak ones is sure to be found); and when in different degrees they strove, each according to his own powers, to fix an enormous number of Psalms, and some were for fifty, others sixty, and some, not content with this number, thought that they actually ought to go beyond it,—there was such a holy difference of opinion in their pious discussion on the rule of their religion that the time for their Vesper office came before the sacred question was decided; and, as they were going to celebrate their daily rites and prayers, one rose up in the midst to chant the Psalms to the Lord. And while they were all sitting (as is still the custom in Egypt, with their minds intently fixed on the words of the chanter, when he had sung eleven Psalms, separated by prayers introduced between them, verse after verse being evenly enunciated he finished the twelfth with a response of Alleluia, and then, by his sudden disappearance from the eyes of all, put an end at once to their discussion and their service. Whereupon the venerable assembly of the Fathers understood that by Divine Providence a general rule had been fixed for the congregations of the brethren through the angel’s direction, and so decreed that this number should be preserved both in their evening and in their nocturnal services. (Saint John Cassian, Institutes, Book II, Chapters 5 and 6)

This Chapter contains a teaching on prayer that goes beyond what Saint Benedict establishes for the Night Office in summer time. In what does this broader teaching consist? First, there is the principle of objectivity, which may be applied to one’s personal prayer as much as to our corporate choral prayer. It is wise to have a personal rule of prayer that sets the bar. When one’s personal (or secret) prayer is left to improvisation and passing inspirations, one departs easily from the regularity without which it is impossible to make progress in prayer. Before taking on a personal rule of prayer, a brother will first obtain his abbot’s blessing and permission because, as Saint Benedict says in Chapter XLIX, “what is done without leave of the spiritual father shall be imputed to presumption and vain-glory, and merit no reward”.

Mere attendance in choir will not, by itself, make a monk who prays always and never loses heart. In fact, the monk who prays only when he goes to choir for the Divine Office will, little by little, lose even his taste for liturgical prayer and seek occasions to shorten it or to be dispensed from it. We come to the monastery for one thing only: to seek God in ceaseless prayer. The devil also comes to the monastery for one thing only: to keep monks from seeking God in ceaseless prayer. All of the devil’s tactics are ordered to this one thing: to keep a monk from praying.

What is the secret prayer of a monk? It is a certain intimacy with God. It is, to use the lovely expression of Monsignor Robert High Benson, “the friendship of Christ”. It is a readiness to tarry in the presence of Our Lord, using words or not using words. Reading provides the kindling for prayer; the Holy Ghost provides the spark that sets it ablaze. Never be afraid of bringing a book to your watch of adoration. I am not suggesting that you read non–stop at prayer, but that you read slowly, lingering over the phrase that speaks to your heart and turning to Our Lord as often as you can, by means of an short invocation, an ejaculatory prayer, a cry from the heart. Do this, and will find yourself, passing from the page you are reading, to the Real Presence that radiates from the altar, to Our Lord who draws your heart to His Heart, and your eyes to His Face. One might say that a monk’s secret prayer has three elements: (1) sapiential reading, that is a reading that seeks to savour the text; (2) the short repeated cry from the heart; and (3) the look of adoring love, a simple wordless gaze fixed on Our Lord. This last element may be very brief and almost fleeting. This is of no importance. A single glance exchanged between friends can say much.

I should like to say one other thing today. There are situations and seasons in the life of every monk when the only way forward is by increasing the quantity of one’s prayer. It may surprise you that I say such a thing. There are long periods in every monk’s life when the only thing a man can do is tell his beads over and over again. The Rosary is a monk’s lifeline in the hour of distress. I cannot insist enough on the value of the Rosary in our monastic life. It is the prayer of the poor man who suffers from his own incapacity for prayer and, possibly even, from a real distaste for prayer. It is the prayer of the humble man who takes his place alongside of the publican in the temple, who “standing afar off, would not so much as lift up his eyes towards heaven; but struck his breast, saying: O God, be merciful to me a sinner” (Luke 18:13).

If you are familiar with the events of Fátima, you may recall that on 13 May 1917, after hearing the Lady say, “I come from heaven”, Lucia asked if she and her little companions would go to heaven. The Lady replied that both Lucia and Jacinta would go to heaven , but that Francisco would need to say many rosaries first. This enigmatic utterance concerning Francisco has, over the years, given rise to a certain amount of speculation as to its meaning. Various interpretations have been ascribed to it, but I found none of them satisfying. Some commentators even suggested that Francisco was somehow held back in his spiritual development and, therefore, needed more prayer than his sister Jacinta and his cousin Lucia.

Had Our Lady said that Francisco was to become a “contemplative soul”, the meaning of her words would have completely escaped Francisco’s understanding. His was the simple vocabulary of a child, of a peasant boy accustomed to the concrete realities of nature. Our Lady’s words that Francisco would “need to say many rosaries” before going to heaven was, in effect, her way of saying that Francisco was to become an entirely contemplative soul before going to heaven, and this by means of many rosaries. For Francisco and for most ordinary men like ourselves, many rosaries are the most simple and efficacious way to union with God. My own experience and observations bear out this affirmation: I can say that I have never known a monk to become, as Abba Lot says, “all fire” who has not been devoted to the Rosary.

I am reminded of something I read many years ago in that marvelous little book on the Rosary by Père Jean Lafrance (1931–1991), Le chapelet, in English, The Rosary: A Road to Constant Prayer. Père Lafrance maintained that if one cannot pray well, one ought to pray much. He went so far as to say that in prayer, for certain souls, at least, quantity might well make up for intensity. Père Lafrance emphasised the sacrificial quality of time spent for God’s sake alone, time wasted, as it were, on attending to God. He held that the investment of time was, in itself, an act of faith, hope, and charity, and that one who begins by praying much will, in the end, pray well, very well.

The  monk who prays much outside of the Divine Office in choir will, over time, be surprised to discover that something has changed or is changing for him when he goes to choir for the Divine Office. He will begin to experience a kind of seamless unity his life, a subterranean stream of prayer that flows uninterruptedly. Such a man will have  begun to “pray always without losing heart” (Luke 18:1).