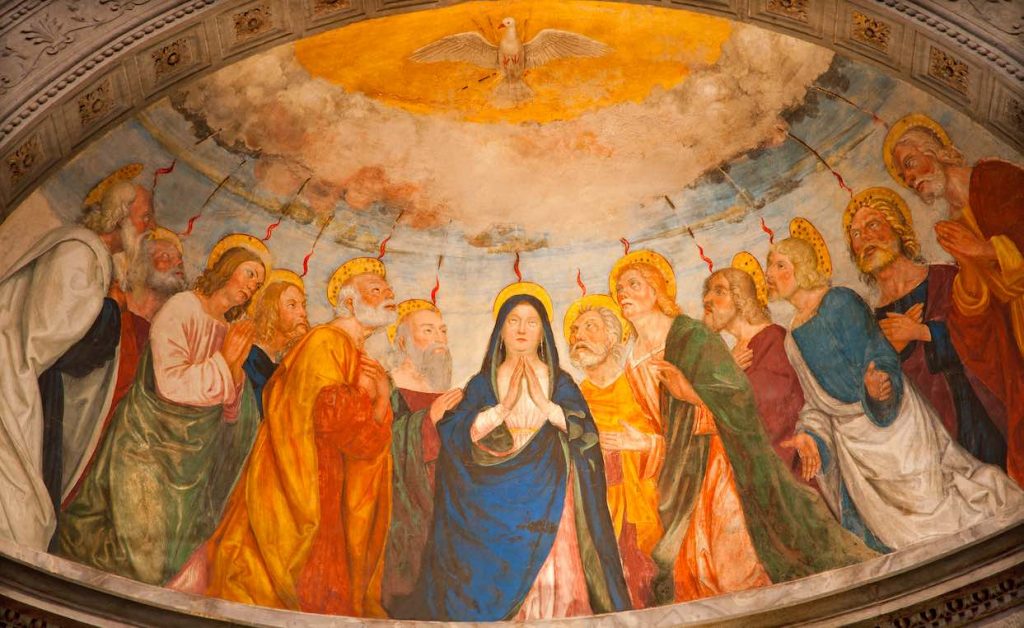 The Spirit of the Lord hath filled the whole world, alleluia; and that which containeth all things hath knowledge of the voice, alleluia, alleluia, alleluia. (Psalm 67:1). Let God arise, and let His enemies be scattered: and let them that hate Him flee from before His face. (Introit of Pentecost)

Never, I think, has an Introit resounded with so powerful a correspondence to the destiny of a nation. I speak, of course, of Ireland, five days away from the referendum on the Eighth Amendment. Repeat often during the coming week, the words of the Introit placed on our lips and in our hearts by the liturgical, the Pentecostal, providence of God:

Let God arise, and let His enemies be scattered: and let them that hate Him flee from before His face. (Psalm 67:1)

The Spirit of the Lord, in ages past, filled Ireland with a mighty wind, sweeping away the idols that held her people in the grip of fear, violence, and superstition; and infusing men, women, and children, rich and poor, powerful and weak, learned and ignorant with a sweet and liberating power that no one could contest or resist. The irrefutable evidence of the Holy Ghost is Ireland’s saints. Wheresoever the Holy Ghost passes, He leaves behind Him a trail of saints. Ireland, long known as the island of saints, was, in ages past, a wholly Pentecostal island, a place ablaze with the fire and light of the Holy Ghost.

The just shall shine, and shall run to and fro like sparks among the reeds. They shall judge nations, and rule over people, and their Lord shall reign for ever. They that trust in him, shall understand the truth: and they that are faithful in love shall rest in him: for grace and peace is to his elect. (Wisdom 3:7–9)

The Holy Ghost, we sang in the introit, “hath knowledge of the voice”. Knowledge of what voice? The voice of whom? The psalmist tells us: “The Lord hath not forgotten the cry of the poor” (Psalm 9:13), and again, “The Lord hath heard the desire of the poor: thy ear hath heard the preparation of their heart.” (Psalm 9:38). Do not listen to those who would want you to think that the Irish have given up on the Holy Ghost or, what is worse, that the Holy Ghost has given up on Ireland. The words of Frank Duff, pronounced in 1997, are today prophetic:

Your ambition [said the great man] is colossal: to conquer with a single blow, to convert a population in a week or so. It is magnificent and fantastic at the same time. But it does become possible if you can make yourselves the outlet point of the Holy Spirit. For He can convert at a stroke, in the twinkling of an eye.

“The Spirit of the Lord hath filled the whole world, alleluia” — this includes Ireland, Ireland today; an Ireland fascinated by glittering images of a new identity; an Ireland seduced by the lying discourses of those who call good what is evil, and evil what is good; an Ireland tempted to give ear to the deception of the age–old serpent. Today’s feast of Pentecost is a magnificent manifestation of the liturgical providence of God. It is an immense ἐπίκλησις, an invocation, a calling–down of the Holy Ghost upon Ireland. The Collect of today’s Mass, becomes, in the context of the this coming week in Ireland, a prayer that one might think crafted in view of what will face us on Friday:

O God, who on this day didst teach the hearts of the faithful by the light of the Holy Ghost: grant unto us, by the same Spirit, to be wise in what is right, and ever to rejoice in His consolation.

To be wise in what is right. Why should Ireland follow nations become foolish in what is wrong? Why should Ireland open her doors to the industry of death that ravages England, The Netherlands, Belgium, France, the United States, and so many other nations? An Ireland enlightened by the Holy Ghost will show the world the consolation that comes from relishing those things that are right — always and everywhere right — and from holding fast to the laws that uphold and protect such things. All of Ireland needs a new Pentecost, a great cleansing as by a mighty wind. All of Ireland needs to be set ablaze again with the fire of the Holy Ghost that blazed up long ago when Saint Patrick enkindled his fire on the Hill of Slane. Take the verse of the First Alleluia and make it today a prayer for Ireland:

Emitte Spiritum tuum, et creabuntur, et renovabis faciem terrae.
Send forth Thy Spirit, and they shall be created, and Thou shalt renew the face of the earth.

Send forth Thy Spirit, and they — sons and daughters quickened in the Holy Faith — shall be created, and Thou shalt renew the face of Ireland. There are, to be sure, naysayers and prophets of doom who declare the death of Catholicism in Ireland. The first error of such people is to assume that the Holy Faith of our Fathers is an “ism”. “Isms” come and go. They are in fashion and out of fashion. They are the subject of debate and of ideological wars. The faith of the Church is not an “ism”. It is fire and light. It cannot be stopped, or consigned to cultural museums, or contained by iniquitous laws. “The Spirit breatheth where He will; and thou hearest His voice, but thou knowest not whence He cometh, and whither He goeth”(John 3:8). And, as the Apostle says:

I suffer hardship like a criminal, yes, even imprisonment; but there is no imprisoning the word of God. (2 Timothy 2:9)

The verse of the Second Alleluia, which we sang kneeling, in a gesture of humble and intense supplication, becomes today, and will be throughout the coming week of the Octave of Pentecost, a great, swelling prayer rising out of the depths for Ireland:

Come, O Holy Ghost, fill the hearts of Thy faithful: and kindle in them the fire of Thy love.

And what, I ask you, is the Golden Sequence of today’s Mass, but a supplication for Ireland in the present hour?

Where Thou art not, man hath nought
Nothing good in deed or thought,
Nothing free from taint of ill.

Heal our wounds, our strength renew,
On our dryness pour Thy dew,
Wash the stains of guilt away.

Bend the stubborn heart and will,
Melt the frozen, warm the chill,
Guide the steps that go astray.

In the Gospel, Our Lord utters sobering words: “For the prince of this world cometh, and in Me he hath not any thing” (John 14:30).  Yes, the prince of this world cometh, even to Ireland, but in the hearts of a people made ready by the Blessed Virgin Mary, Queen of the Cenacle, and indwelt by the Holy Ghost, the prince of the world has no foothold, no claim to power, no empire.  I said this morning in Chapter, that in situations of great distress and momentous import, one can do nothing better than to tell one’s beads. Every Ave of the rosary is a summons addressed to the Holy Ghost, for where Mary is invoked, the Holy Ghost descends sometimes in a mighty wind and in tongues of fire, but more often imperceptibly, in a quiet outpouring of grace that announces the triumph of light over darkness, of joy over sorrow, and yes, of life over death.