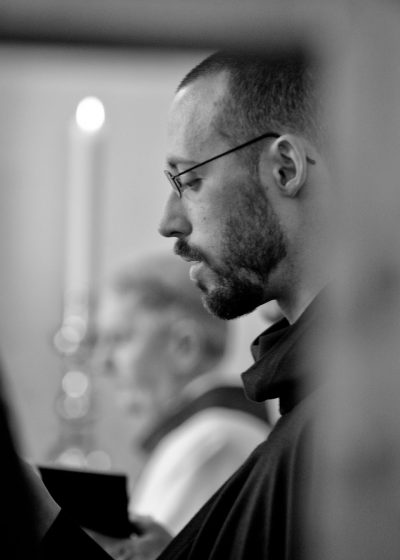 Si sollicitus est ad opus Dei. Fervent in the Work of God: Abbot Hunter–Blair somewhat freely translates the Latin sollicitus of Saint Benedict with the English word fervour. Fervour, in turn, derives from the Latin fervor meaning heat, vehemence, ardor, or passion. Abbot Hunter–Blair’s use of the word can be misleading, given that many equate fervour with an emotional state of ebullient enthusiasm. Fervour, however, is not a state of exalted feelings. One cannot always go to choir in a state of spiritual effervescence. The Benedictine way is, rather, one of sober inebriation, as we sing in the hymn at Lauds on Monday:

And Christ to us for food shall be,
from Him our drink that welleth free,
the Spirit’s wine, that maketh whole,
and mocking not, exalts the soul.

Saint Benedict’s sollicitus can mean careful for, concerned about, punctilious, attentive, diligent, and eager. Going to choir for the Opus Dei is the first and foremost expression, of a monk’s sacrificial gift of self to God. It is an act of gratuitous praise. There cannot be any calculated, measured, or reticent about a monk’s commitment to Divine Office; he goes to choir wholeheartedly, without delay, and for God’s sake. He will obey Saint Benedict’s injunction in Chapter XXII: “Hasten each to forestall the other in going to the Work of God”, and “When they rise for the Work of God, let them gently encourage one another, because of the excuses of the drowsy”. Thus will a monk fulfill the great principle of Saint Benedict in Chapter XLIII: “Let nothing, then, be preferred to the Work of God”.

The choir–stall is not far from the altar, that is, the place of immolation, and this significantly so because the choir–stall is the place from which a monk habitually participates in the sacrificium laudis, Christ’s priestly offering of praise to the Father. It is only fitting that at certain seasons and hours of his life, a monk experiences the Divine Office as his servitutis pensum, that is, as his bounden duty of divine service. The Divine Office is costly: it costs a monk time, energy, and the expenditure of his very breath. Romantic notions of hours spent blissfully in choir give way, over time, to a humble fidelity hour by hour and day after day.

The priority given to the Opus Dei in Benedictine life and its incalculable value for the individual monk, the monastery, and the whole Church, demands of the Benedictine novice an unconditional readiness to make whatever personal sacrifices are required in order to carry it out faithfully and unstintingly.