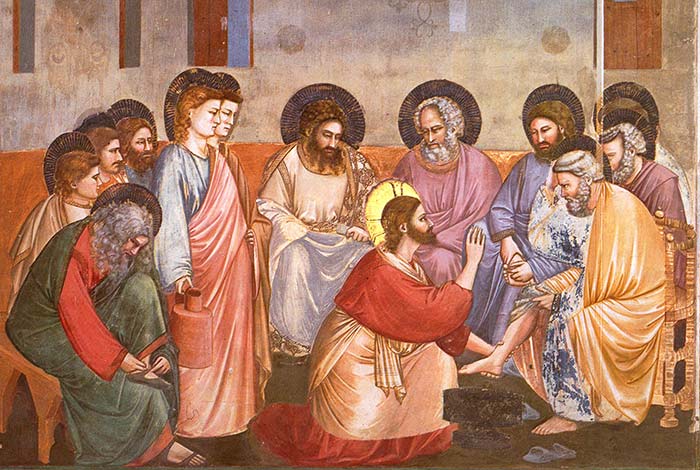 5. The abbot is not to be jealous. Jealous and zealous are, like jealousy and zeal, related words: both derive from the same Greek word ζῆλος. Saint Benedict returns to this word in Chapter LXXII, De zelo bono quod debent monachi habere, “Of the Good Zeal Which Monks Ought to Have”. Here, however, Saint Benedict is treating not of the good zeal “which keepeth us from vice, and leadeth to God and to life everlasting”, but rather of “the green–eyed monster” jealousy. Both jealousy and envy, a related vice, spring from insecurity, possessiveness, and the fear of loss. The cenobitic life can can, alas, give scope to jealousy and envy when men do not own and confess their thoughts of insecurity, possessiveness, and fear. All sorts of situations can give rise to jealousy. The smallest details of life together can be magnified by the lens of jealousy and feed ugly suspicions; jealousy poisons the monastic family by setting son against father, and brother against brother. Our holy patriarch would agree with Shakespeare:

Trifles light as air
Are to the jealous confirmations strong
As proofs of holy writ. (Othello)

Jealousy and envy can strike a monk at any age; they are particularly deleterious when they insinuate themselves into the heart of the abbot — which God forbid — or into the heart of a senior monk. Temptations to jealousy and envy sometime accompany the mid–life crisis and the onset of old age. In mid–life, a man begins to take stock of himself. He looks around and sees men still in the bloom of youth, men with energy, talents, intelligence, and charm. The man crossing mid–life becomes aware that he is more easily fatigued, that his talents no longer sparkle as they once did, that his mind is not as sharp as it once was, and that he has lost the attractiveness that he may have had in his prime. Such a man needs to be vigilant lest thoughts of jealousy and envy begin to embitter him and distort his perceptions of others.

With the onset of old age, a man knows that he has the greater part of his life behind him; past sins become more vivid and the zeal for conversion may become dull. His eyes, ears, hands, joints, muscles, and internal organs no longer function as they once did;  every day is a struggle against fatigue, weakness, and pain. What he has gained in intellectual depth and in wisdom, he feels he has lost in mental agility and quickness of memory. He can no longer pray as once he did, but only as he can, and this prayer is, more than anything else, the humble offering of his poverty to God. The aging or old monk looks around him and sees men who have the greater part of their life ahead of them; he sees in the younger members of the community an immense potential for conversion, for holiness, for heroism. He sees men who are bright–eyed; they have all their hair, or most of it, and all their teeth, or most of them; their reflexes are quick; the zest for life indomitable; their intelligence sharp; their physical resistance apparently unbreakable. The old monk needs to keep his heart pure of even the slightest taint of jealousy, lest, like a poisonous serpent, it make its nest in him, and rearing its head begin to spew venom all about.

In Canto XIII of the Purgatorio, Dante describes souls being purged of the sin of envy by having their eyes stitched shut with an iron wire; these souls are placed on the edge of a precipice and are obliged to lean on one another, shoulder to shoulder, in order to avoid falling into the chasm below. For Dante, this particular vice enters through the eyes, hence the eyes stitched shut. The purifying remedy takes the form of all being obliged to cling one to the other. For Dante, jealousy and envy are vices that attack the very constitution of society by separating men one from another. The envious must learn that he, and everyone around him, are dependent one upon the other for survival. As this particular vice is burned away one begins to see more clearly the interdependent patterns of relations in the Mystical Body of Christ and in the City of God.

There is another kind of jealousy that sometimes strikes monks: one which we must not be afraid of identifying and admitting. Every man wants to be someone for another, to be significant, to be cherished, appreciated, esteemed, and loved. Most men find the fulfilment of these things in marriage. Many find it in good, enduring friendships. Friendship is not forbidden in the cloister; monastic life should, in fact, foster enduring friendships. Such friendships are characterized, as Saint Benedict says in Chapter LXXII, by chaste affection; also by mutual delight in the other’s gifts of nature and of grace, by the patient endurance of one another’s infirmities, whether of body or of mind, and by a lifelong remembrance in prayer. As the monastic family grows, as new members are welcomed and integrated into the community’s life, new configurations of esteem, affection, and collaboration will inevitably emerge. The brother who is insecure, possessive, and fearful of loss, will be threatened by these new relational and affective configurations. He may struggle to incorporate them into his own emotional universe. He may be struck by jealousy, and so tempted to belittle, criticise, or even reject any element that to him represents the loss of what he has. This particular brand of jealousy can strike a monk at any age or at any season of the monastic journey. Saint Benedict warns the abbot against it, for the abbot is not, by virtue of his office, spared any of the temptations and weaknesses that beset other men. This may be a salutary thing, for one who is familiar with such temptations and weaknesses, is better equipped to recognise them in others, and to treat them with the appropriate spiritual remedies.