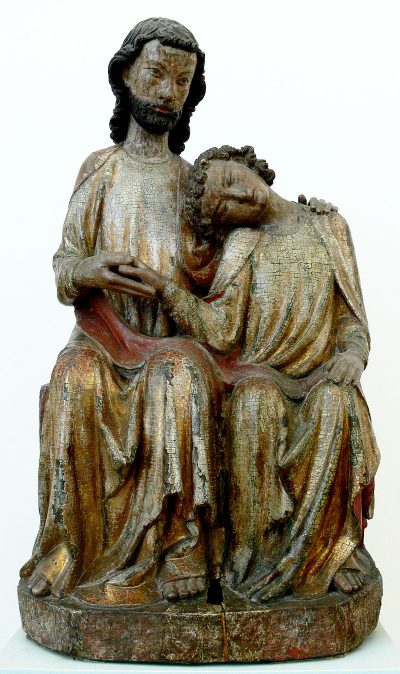 3. Non sit nimius et obstinatus. Abbot Hunter–Blair translates nimius as exacting; in fact, the word means excessive, immoderate, or intemperate. Saint Benedict’s use of this word must be related to what he says in the same Chapter: “Let him so temper all things, that the strong may have something to strive after, and the weak nothing at which to take alarm”. Here, Saint Benedict follows Cassian for whom “discretion is the fountain head and the root of all virtues”. Abba Moses says:

The gift of discretion is no earthly thing and no slight matter, but the greatest prize of divine grace. And unless a monk has pursued it with all zeal, and secured a power of discerning with unerring judgment the spirits that rise up in him, he is sure to go wrong, as if in the darkness of night and dense blackness, and not merely to fall down dangerous pits and precipices, but also to make frequent mistakes in matters that are plain and straightforward. (Conference II, Chapter 1)

Discretion is obtained by humility, and humility is secured by confessing one’s thoughts. Cassian relates the words of Abba Moses:

True discretion, said he, is only secured by true humility. And of this humility the first proof is given by reserving everything (not only what you do but also what you think), for the scrutiny of the elders, so as not to trust at all in your own judgment but to acquiesce in their decisions in all points, and to acknowledge what ought to be considered good or bad by their traditions. And this habit will not only teach a young man to walk in the right path through the true way of discretion, but will also keep him unhurt by all the crafts and deceits of the enemy. For a man cannot possibly be deceived, who lives not by his own judgment but according to the example of the elders, nor will our crafty foe be able to abuse the ignorance of one who is not accustomed from false modesty to conceal all the thoughts which rise in his heart, but either checks them or suffers them to remain, in accordance with the ripened judgment of the elders. For a wrong thought is enfeebled at the moment that it is discovered: and even before the sentence of discretion has been given, the foul serpent is by the power of confession dragged out, so to speak, from his dark under-ground cavern, and in some sense shown up and sent away in disgrace. For evil thoughts will hold sway in us just so long as they are hidden in the heart. (Conference II, Chapter 10)

When Saint Benedict says that the abbot is not to be excessive, Non sit nimius, he shows that the abbot must be a man to whom God has vouchsafed the gift of discretion. It can happen that an abbot, motivated by intemperate zeal for a perfect monastic observance, lead his whole flock over the precipice into a kind of spiritual, psychological, and physical burn–out. It can also happen that an abbot, held back by pusillanimity and an exaggerated fear of effort, lead his flock in the way of least resistance that opens the door to laxity and decadence. The right way is a steady course between an excessive rigor on one side and an excessive softness on the other.

An abbot will be obliged sometimes to back–track, to revisit certain of his decisions, to readjust the observance to the strengths or weaknesses of the community. In seasons of sickness, the abbot will require less. When all are in good health and the majority are capable of doing more, the abbot will not hesitate to set the bar higher. He must, all the same, not do this by sudden starts and fits, for a community thrives on regularity and security in the observance and suffers when too many variations are introduced and when changes in the observance are introduced suddenly and without adequate preparation. Hence, the abbot is not to be excessive; he is to hold the rudder of the monastery with a firm hand and steer a safe course, avoiding sharp turns and changes of direction. The abbot must be on his guard lest too great a personal enthusiasm for certain practices begin to affect his judgment and weigh heavily on the community. At the same time, the abbot must hold the ear of his heart in sinu Jesu, upon the breast of Jesus, lest he become hardened against the grace of continual conversion, and so deprive the community of opportunities to respond generously to the invitations of the Lord.

4. The abbot is not to be obstinate. In Latin, obstinatus, has a good sense and a negative one. It can mean determined, resolute, and steadfast.  Saint Benedict here refers to the negative sense of the word: inflexible, stubborn, and headstrong. Such obstinacy derives from the vice of pride and from a want of discretion. Paradoxically, one often finds the trait of obstinacy in men who are insecure and anxious. Inflexibility in an abbot never bodes well. By inflexibility, I do not mean fortitude, which is one of the gifts of the Holy Ghost; I mean an unbending attachment to a certain way of doing things, even when the situation, viewed objectively, suggests that an alternate way of doing things would redound to the glory of God and benefit the brethren.

On this point, the brethren must be vigilant lest they fall into murmuring and criticism of the abbot’s judgments. It is not uncommon for monks to think or even to say that they find the abbot headstrong and inflexible. In my experience, however, the monk who finds the abbot headstrong and inflexible, does so only when the abbot contradicts or impedes his own will and preferences, and not when the abbot contradicts or impedes the will and preferences of brethren with whom he does not agree. The abbot must not be swayed or allow himself to be too impressed by the criticisms and murmuring of the brethren. He must listen to the brother who comes to him humbly and respectfully expresses legitimate concerns, but he is not obliged to yield to every brother’s request. Nothing so disturbs the peace of the monastery as an abbot who agrees always with the last man to leave his office. This mode of government, or lack of government, is the ruin of a healthy regularity. It leads to situations of contradiction and confusion, and pits one brother against another. The abbot must be humble enough to change what manifestly ought to be changed, and firm enough to say no when a no is what is required. The test of a brother’s humility and obedience is often in his ability to accept, without arguing and grumbling, the abbot’s no.

Human law is rightly changed, in so far as such change is conducive to the common weal. But, to a certain extent, the mere change of law is of itself prejudicial to the common good: because custom avails much for the observance of laws, seeing that what is done contrary to general custom, even in slight matters, is looked upon as grave. Consequently, when a law is changed, the binding power of the law is diminished, in so far as custom is abolished. Wherefore human law should never be changed, unless, in some way or other, the common weal be compensated according to the extent of the harm done in this respect. Such compensation may arise either from some very great and every evident benefit conferred by the new enactment; or from the extreme urgency of the case, due to the fact that either the existing law is clearly unjust, or its observance extremely harmful. Wherefore the jurist says [Pandect. Justin. lib. i, ff., tit. 4, De Constit. Princip.] that “in establishing new laws, there should be evidence of the benefit to be derived, before departing from a law which has long been considered just.” (First Part of the Second Part; Q. 97)

The brethren, for their part, are to follow the wisdom of Chapter LXVIII:

If on any brother there be laid commands that are hard and impossible, let him receive the orders of him who biddeth him with all mildness and obedience. But if he seeth the weight of the burden altogether to exceed his strength, let him seasonably and with patience lay before his Superior the reasons of his incapacity to obey, with out shewing pride, resistance, or contradiction. If, however, after this the Superior still persist in his command, let the younger know that it is expedient for him; and let him obey for the love of God, trusting in His assistance.