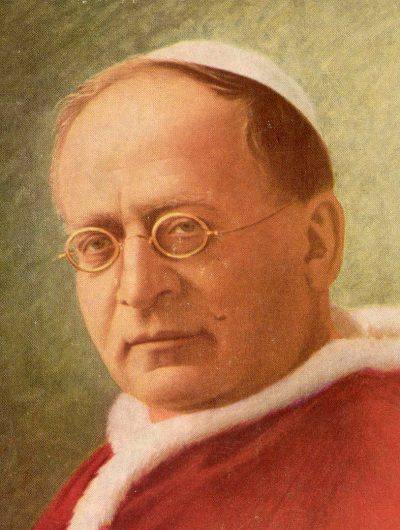 Pope Pius XI’s Apostolic Constitution, Umbratilem, of 8 July 1924, remains, not only for the Carthusians to whom it was addressed, but for all monks who “offer a service to the divine majesty at once humble and noble within the walls of the monastery” and “dedicate themselves entirely to divine worship in the contemplative life” (Perfectae Caritatis, 9).

Of late, certain voices have been raised — and have found audience even within the Church —  that contest the legitimacy of an entire dedication to divine worship in the contemplative life. There are some who, in their zeal for going out into the peripheries, have begun to question the choice of those who, remaining hidden at the centre, in the very heart of the Church, speak more to God than to men and, on behalf of all men, offer themselves to God as hosts with the Sacred Host.

The critique of the contemplative life as self–indulgent, and a squandering of resources that might better be used in works of social justice, is hardly new.

Mary therefore took a pound of ointment of right spikenard, of great price, and anointed the feet of Jesus, and wiped his feet with her hair; and the house was filled with the odour of the ointment. One of his disciples, the same Judas Iscariot who was to betray him, said when he saw it, “Why should not this ointment have been sold? It would have fetched three hundred silver pieces, and alms might have been given to the poor”. He said this, not from any concern for the poor, but because he was a thief; he kept the common purse, and took what was put into it. And Jesus said, “Let her alone; enough that she should keep it for the day when my body is prepared for burial. You have the poor among you always; I am not always among you”. (John 12:3–8)

Today, more, perhaps, than at any time in the past, the Church needs to be filled, like the house of Bethany, with the fragrance of a lavish, even extravagant, outpouring of love. At Silverstream Priory we make our adoration kneeling at a column in the middle of the choir. Our column, dating from post–revolutionary France, is of particular historical significance; it was the mooring pillar of generations of adoring souls, and this through the Franco–Prussian War and the torment of two World Wars.  The column symbolises our being anchored in contemplative stability, our desire to be a permanent, unshakeable presence of prayer in the heart of the Church. Deus in medio ejus, non commovebitur; “God is in the midst thereof, it shall not be moved” (Psalm 45:6).

Here, then, is the teaching of Pope Pius XI:

[1] All those, who, according to their rule, lead a life of solitude remote from the din and follies of the world, and who not only assiduously contemplate the divine mysteries and the eternal truths, and pour forth ardent and continual prayers to God that his kingdom may flourish and be daily spread more widely, but who also atone for the sins of other men still more than for their own by mortification, prescribed or voluntary, of mind and body – such indeed must be said to have chosen the better part, like Mary of Bethany.

For no more perfect state and rule of life than that can be proposed for men to take up and embrace, if the Lord calls them to it. Moreover, by the inward holiness of those who lead the solitary life in the silence of the cloister and by their most intimate union with God, is kept brightly shining the halo of that holiness which the spotless Bride of Jesus Christ holds up to the admiration and imitation of all.

[2] No wonder, then, that ecclesiastical writers of former ages, wishing to explain and extol the power and efficacy of the prayers of these same religious men, should have gone so far as to liken their prayers to Moses, quoting a well-known fact, viz., that when Josue was engaged in battle with the Amalekites on the plain and Moses on the top of a hill near by was praying and beseeching God for the victory of his people, it happened that as long as Moses held his hands raised heavenward, the Israelites conquered, but if from weariness he lowered them a little, then the Amalekites overcame the Israelites; wherefore, Aaron and Hur on either side held up his arms until Josue left the field victorious.

This example most aptly symbolizes the effect of the prayers of the religious We have spoken of, since those prayers are borne up by the august Sacrifice of the Altar on one hand, and on the other hand by works of penance, as by two props typified respectively in a certain way, by Aaron and Hur; it being the usual and indeed the principal duty of these solitaries, as We have remarked above, to offer themselves up to God and devote themselves as propitiatory victims and hostages for peace for their own weal and that of the world – a function which they fulfill in an official way, as it were.

[3] Therefore, from the earliest times this mode of life, most perfect and at the same time most useful and fruitful for the whole of Christendom more than anyone can conceive, took root in the Church and spread abroad on all sides.

For if we pass over the “Ascetics” who right from the very outset of our religion used to live so austerely, though in their own houses, that Cyprian considered them as “the noblest part of Christ’s flock,” it is known that many of the Faithful in Egypt, persecuted under the Emperor Decius on account of their religion, had fled into the desert parts of the land and had found by experience that the solitary sort of life they led there was most profitable for attaining perfection, they continued that way of living even after peace had been granted to the Church.

The number of these anchorites was so immense that there were said to be as many inhabitants in the wilderness as there were citizens in the towns. Some of them went to live far away from all human society, while others, under the leadership of Anthony, began to live in lauras. That was the origin of the common life – life in community – which, gradually evolved, organized and ruled by certain definite laws, was quickly propagated throughout all the countries of the East and then spread over Italy, Gaul, and Proconsular Africa, while monasteries rose up on all sides.

[4] Since the whole object of this institution lay in this, that the monks, each one in the privacy of his cell, unoccupied with any exterior ministry and having nothing to do with it, should fix their thoughts exclusively on things of heaven, wonderful was the benefit that accrued from it to Christian Society.

Both the clergy and the laymen of that age could not help considering, to their own great profit, the example given by men who, urged on by the charity of Christ to all that was highest and most arduous, sought to follow the obscure and hidden life he himself had led in his home in Nazareth, and, like sacrificial victims vowed to God, to fill up those things that were wanting in his sufferings.

[5] Nevertheless, in the course of time the institution so pre-eminent, that is called the contemplative life, declined somewhat and lost in vigor. The reason was that, although the monks, as a rule, shunned the care of souls and other exterior ministry, yet they came by degrees to combine the works of active life with their pondering on divine things and their contemplation.

They thought that they ought to comply with the earnest request of the bishops and assist in the labors of the secular priests who were not able to cope with the many needs of the Faithful, or, that it behoved them to take charge of popular instruction – an object of Charlemagne”s solicitude. Moreover, owing to the widespread disturbances of these times, monasteries had perhaps suffered some harm and had slackened.

[6] Consequently it was highly important for the Church that this most holy form of life, which had been kept unimpaired for so many centuries in monasteries, should be restored to its pristine vigor, so that there should never be lacking men of prayer who, unimpeded by any other care, would be perpetually besieging the Divine Mercy and would thus draw down from heaven benefits of every sort upon men, too neglectful of their salvation.