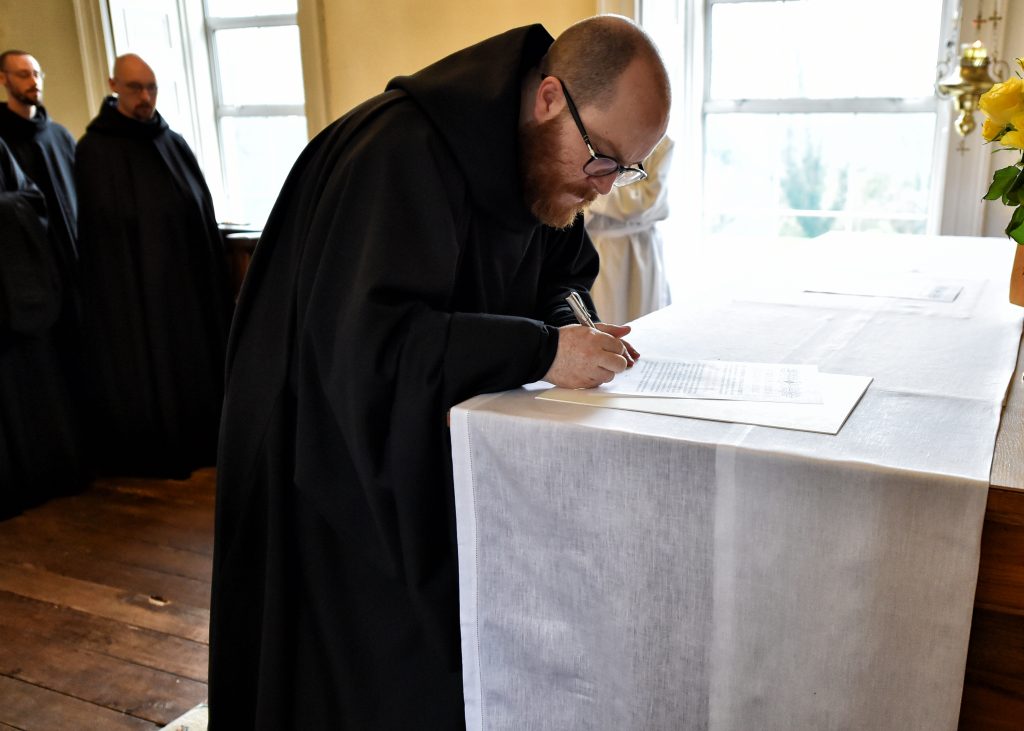 CHAPTER LVIII. Of the Discipline of receiving Brethren into Religion
Continued from 11 Apr.
And if he promise steadfastly to persevere, after the lapse of two months let this Rule be read through to him, with these words: “Behold the law, under which thou desirest to fight. If thou canst observe it, enter in; if thou canst not, freely depart.” If he still stand firm, let him be taken back to the aforesaid cell of the Novices, and again tried with all patience. And, after a space of six months, let the Rule be again read to him, that he may know unto what he cometh. Should he still persevere, after four months let the same Rule be read to him once more. And if, having well considered within himself, he promise to keep it in all things, and to observe everything that is commanded him, then let him be received into the community, knowing that he is now bound by the law of the Rule, so that from that day forward he cannot depart from the Monastery, nor shake from off his neck the yoke of the Rule, which after such prolonged deliberation he was free either to refuse or to accept.

In legislating for the reception of brethren, Saint Benedict provides for a few days in the guesthouse. This “few days” corresponds to what today we call the postulancy. A noviceship of twelve months follows; the year of noviceship is divided into three parts of two months, six months, and four months. Each part of the noviceship, or “perseverance”, is marked by an integral reading of the Holy Rule. Having listened three times to the reading of the Holy Rule, and after due consideration, the novice is deemed ready to engage himself by monastic profession for life. It must, nonetheless, be understood that all of this cannot be understood rightly, except in the pure light of the Gospel:

The next day again John stood, and two of his disciples. And beholding Jesus walking, he saith: Behold the Lamb of God. And the two disciples heard him speak, and they followed Jesus. And Jesus turning, and seeing them following him, saith to them: What seek you? Who said to him, Rabbi, (which is to say, being interpreted, Master,) where dwellest thou? He saith to them: Come and see. They came, and saw where he abode, and they stayed with him that day. (John 1:35–39)

Saint Benedict’s discipline of receiving brethren has developed over the centuries without, however, diminishing the delays of time set forth in the Holy Rule.  These delays of time have, rather, been prolonged. Today, for example, a man, normally between the ages of 19 and 35, comes for no less than three months as an enquirer. This is, in effect, a first stage of the postulancy. If, after three months, the Father Prior and seniors deem the man suitable for advancement, he is received for the second stage of the postulancy, which may be as short as four or five weeks but not longer than another three months.

Our noviceship is longer than that prescribed by Saint Benedict; it is not twelve months, but eighteen. The novice will, during this time hear the Holy Rule read and commented in Chapter no less than four times. If the novice is admitted to Simple Profession, he pronounces his vows for three years, after which he may be admitted to Solemn Profession and receive the Monastic Consecration. We have, then, before Solemn Profession, a delay of five years. This is at least four years more than what Saint Benedict prescribes in the Holy Rule.

In some monasteries the postulancy is lengthened to more than a year and there is, in some places, a prolongation of the time of Simple Vows beyond three years. With such a program, one can arrive at Solemn Profession solidly middle–aged, that is between 45 and 65. There is about this something anomalous. If men and women waited as long to enter the lifelong bonds of Holy Marriage and assume the obligations of family life as some wait before making Solemn Profession, they would be well past the normal ages of child–bearing. It is a good and healthy thing to want to give to God the strength and freshness of one’s youth. In Ireland today, the average age of marriage for men has risen to 35 years, higher than it has ever been. Men tend, more and more, to retard the age of making decisions and commitments.

There is a general trend in Western society for men to defer making life–changing decisions. Various reasons are given for this: most of them are of a psychological nature: affective immaturity; anxiety; an inability to decide; and fear of failure. Some are held back by attachments to family and friends. There may be reasons of an economic nature: the burden of debts, and the obligation to support parents and other family members. Still others struggle with putting aside money and possessions. None of these things are new.

In all of these matters, one must, I think return to the Gospels. A single word of Our Lord is sufficient to sweep away every hesitation and fear.

You know Saint Mark’s poignant account of the young man with great possessions:

And Jesus looking on him, loved him, and said to him: One thing is wanting unto thee: go, sell whatsoever thou hast, and give to the poor, and thou shalt have treasure in heaven; and come, follow me. Who being struck sad at that saying, went away sorrowful: for he had great possessions. And Jesus looking round about, saith to his disciples: How hardly shall they that have riches, enter into the kingdom of God! And the disciples were astonished at his words. But Jesus again answering, saith to them: Children, how hard is it for them that trust in riches, to enter into the kingdom of God? It is easier for a camel to pass through the eye of a needle, than for a rich man to enter into the kingdom of God. Who wondered the more, saying among themselves: Who then can be saved? And Jesus looking on them, saith: With men it is impossible; but not with God: for all things are possible with God. (Mark 10:21–27)

This passage of Saint Mark begins and ends with the gaze of Jesus. He fixes His gaze first upon the young man; it is a divine look, communicating love. Then, Jesus fixes His gaze upon the disciples; again it is a divine look, accompanied by reassuring words: “With men it is impossible; but not with God: for all things are possible with God”. This is the word that, at every stage of the monastic journey, one must receive and hold in one’s heart.