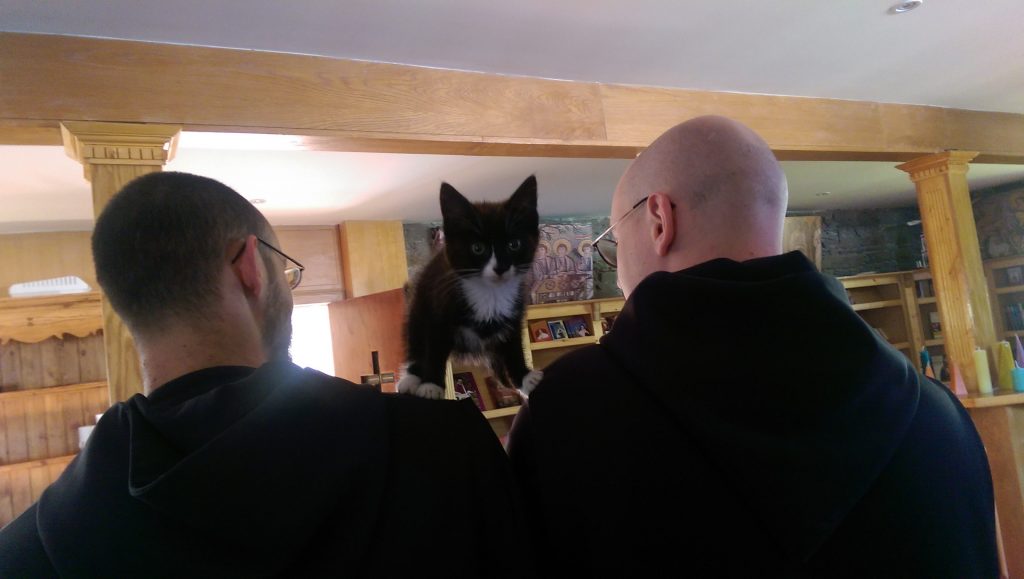 CHAPTER LXIV. Of the Appointment of the Abbot
Continued from 20 Apr.
He must be chaste, sober, merciful, ever preferring mercy to justice, that he himself may obtain mercy. Let him hate sin, and love the brethren. And even in his corrections, let him act with prudence, and not go too far, lest while he seeketh too eagerly to scrape off the rust, the vessel be broken. Let him keep his own frailty ever before his eyes, and remember that the bruised reed must not be broken. And by this we do not mean that he should suffer vices to grow up; but that prudently and with charity he should cut them off, in the way he shall see best for each, as we have already said; and let him study rather to be loved than feared.

It is incumbent on all Christians to be chaste according to each one’s state in life. Of monks, Saint Benedict asks even more; in Chapter IV, Saint Benedict says that monks are to love chastity. Castitatem amare. Saint Thomas says that the will is inclined to love that which procures happiness (felicitas or beatitudo). The abbot is to delight in chastity and practice it; the virtue of chastity leads to happiness, dilates the soul, and so opens one to the love of God. “Blessed are the clean of heart: for they shall see God” (Matthew 5:8). Unchastity causes spiritual blindness and thus renders the a man unfit for the government of souls. Similarly, sobriety is incumbent on all Christians. Sobriety has to do with observing the right measure in all things. The sober man uses things rightly and avoids excess. Saint Thomas says:

Now sobriety takes its name from “measure,” for a man is said to be sober because he observes the “bria,” i.e. the measure. Wherefore sobriety lays a special claim to that matter wherein the observance of the measure is most deserving of praise. ( 2nd Part of the 2nd Part, Q. 149, art. 1)

After naming the two virtues— chastity and sobriety – that preserve the abbot from vices that would render him unfit for the government of souls, Saint Benedict says that the abbot is to be merciful. Et semper superexaltet misericordiam iudicio, ut idem ipse consequatur. “Let him always exalt mercy above all else, that he himself might obtain mercy”. Here, as in so many other passages, the Beatitudes shine through the text of the Holy Rule: “Blessed are the merciful: for they shall obtain mercy” (Matthew 5:7).  The man who is legalistic and exacting, the man who judges by weight and measure, is not suited to the government of souls. The abbot, because he teaches the Holy Rule, applies it, and interprets it, must ever be mindful of the word of Our Lord, “Woe to you lawyers also, because you load men with burdens which they cannot bear, and you yourselves touch not the packs with one of your fingers.” (Luke 11:46).

Mercy is not collusion with evil. The notion that the merciful man winks at evil and tolerates sin is a distortion of mercy. Mercy is not directed towards acts; it is directed towards persons. Mercy is not shown to sin, but to sinners. For this reason, Saint Benedict says, “Let him hate sin, and love the brethren”. The abbot, therefore, says: “Brother, what you have done is wrong, harmful, and despicable, but you remain loved, the wrong you did can be repaired, and you can be forgiven. Humble yourself, and we shall start afresh”.

The last of the Instruments of Good Works in Chapter IV is Et de Dei misericordia numquam desperare, “And never to despair of the mercy of God”. The mercy of God is revealed in Christ and in the abbot, who is believed to hold the place of Christ in the monastery (Chapter II). The abbot is the herald of the mercy of God in Christ; by his teaching and in all his actions, he is to inspire his sons with confidence in the mercy of God. The words of Our Lord in the synagogue of Nazareth indicate to the abbot the course to be followed:

The Spirit of the Lord is upon me. Wherefore he hath anointed me to preach the gospel to the poor, he hath sent me to heal the contrite of heart, to preach deliverance to the captives, and sight to the blind, to set at liberty them that are bruised, to preach the acceptable year of the Lord, and the day of reward. (Luke 4:18–19)

Saint Benedict says that, even in his corrections, the abbot is to act with prudence, and not go too far, “lest while he seeketh too eagerly to scrape off the rust, the vessel be broken”. The abbot must be zealous for the good observance that disposes souls to charity among themselves and to union with God, but in this zeal there must be nothing harsh, nothing overbearing, or too vigorous, lest he injure those whom he would correct. The abbot must weigh all things and adapt his corrections to each one. There are brothers who can be corrected, even somewhat energetically, and who, taking the correction in stride, go their way untroubled. There are other brothers who, when corrected even slightly, become downcast and undone, indulging their wounded pride, or drawing irrational and sweeping conclusions. Such brothers respond to correction by saying or by thinking, “I am a failure. I can never do anything right. I am always a disappointment. The others must think me a loser, a dolt, a duffer, a disgrace, and so forth”.  Note the unhinged use of absolutes in such self–deprecation: “I am a failure” instead of us, “I sometimes fail”; “I can never do anything right” instead of “I sometimes do not get things right”; “I am always a disappointment” instead of, “I do sometimes fall short of what is expected of me, and so, sometimes, let others down”.

A monk must learn how to welcome correction humbly, graciously, and manfully. It is humble, gracious, and manly, to respond to a correction by saying, “Thank you, [Very Reverend Father, or Father, or Brother], for this correction. I promise to repair the damage done”, or, “Thank you, [N.], I will do my best not to repeat this fault”, or, “Thank you, [N.], Now that you have made me aware of my fault, I will know how to avoid it in the future”. This contrasts with the reaction of the monk who, when corrected, says, “If that’s the way things are, you needn’t ask me again to do such and such a job”, or, “This just proves that I am a failure”. Some brothers, when corrected, are plunged into self–pity and desolation. Others murmur against the abbot and the Rule, and begin to fantasise about leaving the monastery. Should the abbot, or a senior try to help such a brother by reasoning with him, he retorts or thinks: “You really don’t know how bad I am, how utterly hopeless, how massively miserable”.

Correction is effective only when it is administered wisely and with kindness, and when it is received humbly and with graciousness. There are monks who, by their reactions to being corrected, so intimidate and discourage their abbot that he renounces all correction. When correction is administered and received in the right spirit, the rust is removed from the vessel without breaking it, and the bruised reed is not broken. The abbot can, I think, in all such circumstances, do nothing better than make the Apostle’s fatherly prayer his own:

With this in mind, then, I fall on my knees to the Father of our Lord Jesus Christ, that Father from whom all fatherhood in heaven and on earth takes its title. May he, out of the rich treasury of his glory, strengthen you through his Spirit with a power that reaches your innermost being. May Christ find a dwelling-place, through faith, in your hearts; may your lives be rooted in love, founded on love. May you and all the saints be enabled to measure, in all its breadth and length and height and depth the love of Christ, to know what passes knowledge. May you be filled with all the completion God has to give. He whose power is at work in us is powerful enough, and more than powerful enough, to carry out his purpose beyond all our hopes and dreams; may he be glorified in the Church, and in Christ Jesus, to the last generation of eternity. Amen. (Ephesians 3:14–21)