Skip to content
HomeHoly GhostBut when He, the Spirit of truth, is come 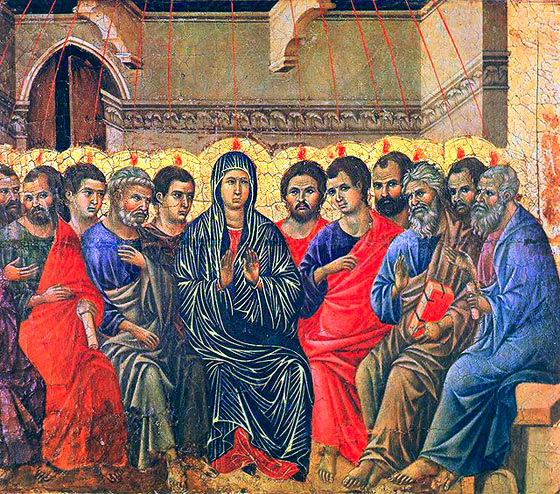 Gospel: John 16. 5-14
At that time Jesus said to His disciples: I go to Him that sent Me: and none of you asketh Me: Whither goest Thou? But because I have spoken these things to you, sorrow hath filled your heart. But I tell you the truth: it is expedient to you that I go: for if I go not, the Paraclete will not come to you: but if I go, I will send Him to you. And when He is come, He will convince the world of sin, and of justice and of judgment. Of sin, because they believed not in Me: and of justice, because I go to the Father, and you shall see Me no longer: and of judgment, because the prince of this world is already judged. I have yet many things to say to you; but you cannot bear them now. But when He, the Spirit of truth, is come, He will teach you all truth. For He shall not speak of Himself: but what things soever He shall hear He shall speak, and the things that are to come, He shall show you. He shall glorify Me: because He shall receive of Mine and shall show it to you.

We enter today, step by step, into the sanctuary of the Cenacle where Our Lord speaks to His own, opening His Heart to them. He reveals His own mission. He promises the gift of the Spirit of truth. He announces the mystery of His reditus ad Patrem, return to the Father, and of the return to the Father of all who form one body with Him. He says, “I go to Him that sent Me”. He says this to reassure the apostles who fear nothing so much as the disappearance and loss of this God–Man to whom they have given their lives. The apostles are in the grip of a sorrow so heavy that they cannot even ask the question that needs to be asked: “Whither goest Thou?” Our Lord looks into their hearts. He sees there the question that must be asked, the question that must be answered. With the most reassuring patience, Our Lord Himself asks the question and gives the answer. “But I tell you the truth: it is expedient to you that I go: for if I go not, the Paraclete will not come to you; but if I go, I will send him to you” (John 16:7).

Our Lord could have used any one of a number of names of the Holy Ghost. The Church uses many of these in her prayer: Living Fountain, Fire of Love, Spiritual Anointing, Finger of God’s Right Hand, Living Water, Treasury of Gifts, Father of the Poor, Sweet Guest of the Soul. Our Lord uses here only two designations of the Holy Ghost, and He places one before the other. The first is Paraclete, from the Greek παράκλητος. The literal meaning of the word refers to one called close to the side of another. It refers to a a legal advocate who can assess a situation rightly because he is close to his client. He can plead his client’s cause convincingly by demonstrating the evident truth of what is right.

The Spirit of the Lord is upon me. Wherefore he hath anointed me to preach the gospel to the poor, he hath sent me to heal the contrite of heart, to preach deliverance to the captives, and sight to the blind, to set at liberty them that are bruised, to preach the acceptable year of the Lord, and the day of reward. (Luke 4:18–19)

The Holy Ghost being, as Pope Leo XIII said, “the soul of the Church”, moves the Body of Christ to continue the mission of Christ the Head. The apostles, however, feared that, with the disappearance of Jesus, all of this would come to an end: no more gospel preached to the poor, no more healing for the contrite of heart, no more preaching of deliverance to captives, no more sight to the bind, no more liberty to them that are bruised. The feared a tragic ending to three idyllic years in the company of Jesus, a return to hopelessness and, more than anything else, the snuffing out of the One who had been the light of their lives.

The Holy Ghost shines a search–light over every situation. He shows up sin for what it is in all its horror. He reveals the sovereign rightness of all that God wills and decrees. He moves souls to adore the Justice of God, that is, the rightness, the perfection, the wisdom, truth, beauty, and goodness of all that He ordains. He discloses the judgment of God against all who, in pride and disobedience, rise up against him, repeating the ancient cry of the fallen Angel: Non serviam, “I will not serve”. “The prince of this world”, says Our Lord, “is already judged and with him are judged all who echo his defiant Non serviam.

In the light of this, is it mere coincidence that Pentecost will fall five days before the referendum on the 8th Amendment? Many Catholics in Ireland are, at the moment, fearful believers, tracked by insecurity, haunted by questions concerning the future of the Church, and the things that lie ahead. If ever, we needed to turn confidently to the Holy Ghost, it is now. If ever we needed, as a people, to cling resolutely to the promises of Christ, it is now. What does He say?

When He, the Spirit of truth, is come, He will teach you all truth. For He shall not speak of Himself: but what things soever He shall hear He shall speak, and the things that are to come, He shall show you. He shall glorify Me: because He shall receive of Mine and shall show it to you. (John 16:13–14)

The truth revealed by the Holy Ghost is not vague, nor is it open to interpretation, nor can it be subjected to dilution, colouring, or political expediency. The truth revealed by the Holy Ghost is so gloriously evident, that having once glimpsed it, one cannot turn away from it without sinning against the light. There is an undeniably prophetic quality to the words of Pope Leo XIII, who, in May 1897, called the attention of the universal Church to the presence and operations of the Holy Ghost, bidding all Catholics join in the Great Novena of Pentecost:

Since He is the Spirit of Truth, whosoever faileth by weakness or ignorance may perhaps have some excuse before Almighty God; but he who resists the truth through malice and turns away from it, sins most grievously against the Holy Ghost. In our days this sin has become so frequent that those dark times seem to have come which were foretold by Saint Paul, in which men, blinded by the just judgment of God, should take falsehood for truth, and should believe in “the prince of this world,” who is a liar and the father thereof, as a teacher of truth: “God shall send them the operation of error, to believe lying (2 Thess. 2:10). In the last times some shall depart from the faith, giving heed to spirits of error and the doctrines of devils” (1 Tim. 4:1). But since the Holy Ghost, as We have said, dwells in us as in His temple, We must repeat the warning of the Apostle: “Grieve not the Holy Spirit of God, whereby you are sealed” (Eph. 4:30). Nor is it enough to fly from sin; every Christian ought to shine with the splendour of virtue so as to be pleasing to so great and so beneficent a guest; and first of all with chastity and holiness, for chaste and holy things befit the temple. Hence the words of the Apostle: “Know you not that you are the temple of God, and that the Spirit of God dwelleth in you? But if any man violate the temple of God, him shall God destroy. For the temple of God is holy, which you are” (1 Cor. 3:16-17): a terrible, indeed, but a just warning.

The Holy Ghost speaks not of Himself, but of Christ. The Holy Ghost makes the Word audible in every human heart. Men, even churchmen, may harden their hearts to the voice of the Word, but the Holy Ghost will not be silenced: not by the infernal din of the media, nor by the lying discourses of political demagogues, nor by those who teach the doctrines of devils from high places, nor even by the iniquitous legislation of nations. The Holy Ghost reduces to silence every specious argument, every appeal for cowardly compromise, and every distortion of the Gospel. The Holy Ghost comes to those who call upon Him. He comes as the Paraclete to stand close by the side of all who entrust themselves to His divine assistance. The Holy Ghost will, I am confident, descend afresh even upon Ireland, provided that we, like the Apostles in the Cenacle, “persevere in prayer with Mary, the Mother of Jesus” (Acts 1:14) . The edict of Pope Leo XIII has not been abrogated. It is, I believe, more actual and relevant today than when first it was promulgated one–hundred–twenty–one years ago:

We decree and command that throughout the whole Catholic Church, this year and in every subsequent year, a Novena shall take place before Whit Sunday, in all parish churches, and also, if the local Ordinaries think fit, in other churches and oratories.

“The things that are to come, He shall show you”, says the Lord. “He shall glorify Me: because He shall receive of Mine and shall show it to you” (John 16:13–14). May it be given to all Ireland to see all that the Holy Ghost would show us and, like the Virgin Mary, to bow humbly beneath His glorious overshadowing.