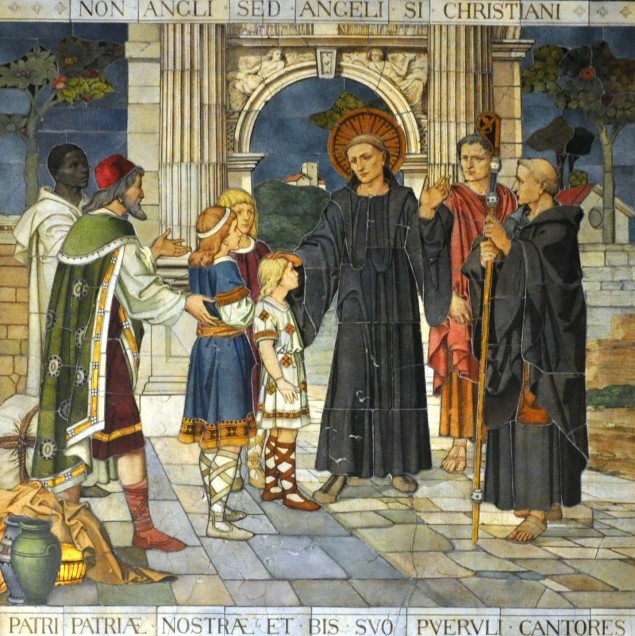 Your Servants Through Jesus
The feast of Saint Gregory the Great, falling in the midst of Lent on March 12th, brings joy to the whole Church and, in a special way, to the Benedictine Order. Like Saint Paul, Saint Gregory had a passion for preaching “the light of the gospel of the glory of Christ” (2 Cor 4:4). “For we preach not ourselves, but Jesus Christ our Lord; and ourselves your servants through Jesus” (2 Cor 4:5).

Illumined by the Love of Jesus Christ
Saint Gregory was born into a patrician family in the year 540. His prestigious family background and education prepared him to do great things in Rome. His place was among the learned and esteemed. By the age of thirty-five, he was well on the way to a successful life, according to worldly standards. And then, like so many saints before him and like so many after him, Gregory was illumined by the love of Jesus Christ in so intimate a way that it changed the direction of his life. “God, who commanded the light to shine out of darkness, hath shined in our hearts, to give the light of the knowledge of the glory of God, in the face of Christ Jesus” (2 Cor 4:6).

The Monastic Haven
The Gospels and the Psalms became his inseparable companions. Gregory became a monk, a disciple in the school of the Holy Patriarch Saint Benedict, although not without a struggle. “Even after I was filled with heavenly desire,” he says, “I preferred to be clothed in secular garb. Long-standing habit so bound me that I could not change my outward life…. Finally, I fled all this with anxiety and sought the safe haven of the monastery. Having left behind what belongs to the world (as I mistakenly thought at the time), I escaped naked from the shipwreck of this life.”

Servant of the Servants of God
Saint Gregory was acutely aware of his own fragility. Again, Saint Paul reveals the soul of Gregory: “We have this treasure in earthen vessels, that the excellency may be of the power of God, and not of us” (2 Cor 4:7). Benedictine obedience, silence, and humility, together with the daily round of the Work of God, prepared Saint Gregory to become the Bishop of Rome, the Supreme Pontiff and, to use his own expression, the Servant of the Servants of God.

All Pope and All Monk
Saint Gregory did not live the cloistered life for very long, but it marked him indelibly, almost painfully, and this for life. His talents and learning did not go unnoticed. Pope Gelasius sent him as his special delegate to Constantinople where he remained for six years. Upon his return to Rome, he was elected Pope. All his life, Saint Gregory longed for the silence of the monastery. All his life, he lamented that the affairs of the Church consumed him, leaving him with little time for prayer and contemplation. Outwardly, Gregory was all pope; inwardly, he was all monk.

Non Angli Sed Angeli
Zeal to make known “the glory of God in the face of Christ Jesus” (2 Cor 4:6) compelled Pope Gregory to send the Roman monk Augustine together with forty others to preach the Gospel of Christ in England. Saint Gregory had a special affection for the English. Saint Bede, in his Ecclesiastical History, recounts the origin of the English mission:

Nor must we pass by in silence the story of the blessed Gregory, handed down to us by the tradition of our ancestors, which explains his earnest care for the salvation of our nation. It is said that one day, when some merchants had lately arrived at Rome, many things were exposed for sale in the market place, and much people resorted thither to buy: Gregory himself went with the rest, and saw among other wares some boys put up for sale, of fair complexion, with pleasing countenances, and very beautiful hair. When he beheld them, he asked, it is said, from what region or country they were brought, and was told, from the island of Britain, and that the inhabitants were like that in appearance.

He again inquired whether those islanders were Christians, or still involved in the errors of paganism, and was informed that they were pagans. Then fetching a deep sigh from the bottom of his heart, “Alas! What pity,” said he, “that the author of darkness should own men of such fair countenances; and that with such grace of outward form, their minds should be void of inward grace.” He therefore again asked, what was the name of that nation, and was answered, that they were called Angles. “Right,” said he, “for they have an angelic face, and it is meet that such should be co-heirs with the Angels in heaven.”

Pray today for the Ordinariates established by Pope Benedict XVI for Anglicans returning to full communion with the See of Rome! Saint Gregory is the “father in Christ” of the Ecclesia Anglicana. Pray that, through his intercession, the Ordinariates may flourish unimpeded in their mission, and so accomplish that which Pope Benedict XVI had in view when he made them possible.

The Word of God
Saint Gregory preached incessantly. He knew that the Church would flourish only if the faithful were nourished with the Word of God. His homilies and other writings were read and copied throughout the Middle Ages and, in this way, came down to us. Saint Gregory continues to feed us with the Word of God. He calls us to a heart-piercing, life-changing reading of the Scriptures. Blessed John XXIII read and re-read Saint Gregory’s Rule for Pastors so as to better fulfill his own mission as Servant of the Servants of God. The saints engender saints. We are known by the company we keep and by the books we read!

The Sacred Liturgy
Pope Saint Gregory was deeply concerned with the dignity and beauty of the Sacred Liturgy. In this he was a worthy son of Saint Benedict. He encouraged the study of liturgical chant and the formation of singers for the glory of God. Seek Saint Gregory’s intercession at the present time, so that the measures taken by Pope Benedict XVI to restore beauty, reverence and dignity to the celebration of the Holy Mysteries may continue to be fostered in the Church. The Holy Father spoke of Saint Gregory the Great in Summorum Pontificum. This is what he said:

Up to our own times, it has been the constant concern of supreme pontiffs to ensure that the Church of Christ offers a worthy ritual to the Divine Majesty, ‘to the praise and glory of His name,’ and ‘to the benefit of all His Holy Church.’

Since time immemorial it has been necessary – as it is also for the future – to maintain the principle according to which ‘each particular Church must concur with the universal Church, not only as regards the doctrine of the faith and the sacramental signs, but also as regards the usages universally accepted by uninterrupted apostolic tradition, which must be observed not only to avoid errors but also to transmit the integrity of the faith, because the Church’s law of prayer corresponds to her law of faith.’

Among the pontiffs who showed that requisite concern, particularly outstanding is the name of St. Gregory the Great, who made every effort to ensure that the new peoples of Europe received both the Catholic faith and the treasures of worship and culture that had been accumulated by the Romans in preceding centuries. He commanded that the form of the sacred liturgy as celebrated in Rome (concerning both the Sacrifice of Mass and the Divine Office) be conserved. He took great concern to ensure the dissemination of monks and nuns who, following the Rule of St. Benedict, together with the announcement of the Gospel illustrated with their lives the wise provision of their Rule that “nothing should be placed before the work of God.” In this way the sacred liturgy, celebrated according to the Roman use, enriched not only the faith and piety but also the culture of many peoples. It is known, in fact, that the Latin liturgy of the Church in its various forms, in each century of the Christian era, has been a spur to the spiritual life of many saints, has reinforced many peoples in the virtue of religion and fecundated their piety.

Teach Us to Sing Wisely
Saint Gregory the Great, Servant of the Servants of God, be present to us today as Father, Shepherd, and Teacher. Teach us to sing wisely, that the words on our lips may pierce our hearts, raising us to the love of heavenly things, and to the glory of the Father, and of the Son, and of the Holy Ghost, now and always and unto the ages of ages.