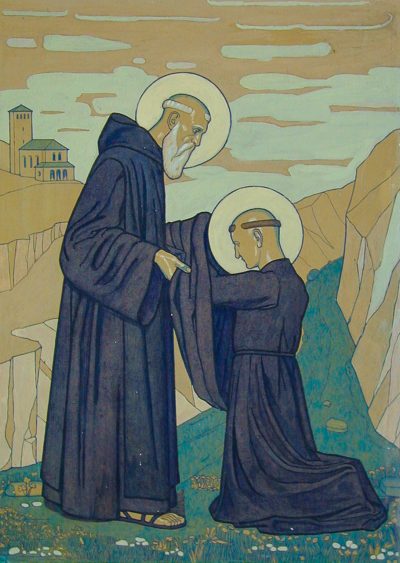 14 Jan. 15 May. 14 Sept.
The Abbot ought always to remember what he is, and what he is called, and to know that to whom more is committed, from him more is required; and he must consider how difficult and arduous a task he hath undertaken, of ruling souls and adapting himself to many dispositions. Let him so accommodate and suit himself to the character and intelligence of each, winning some by kindness, others by reproof, others by persuasion, that he may not only suffer no loss in the flock committed to him, but may even rejoice in their virtuous increase.

The opening phrase of this portion of the Holy Rule returns to the first sentence of the Chapter:

An Abbot who is worthy to rule over the monastery ought always to remember what he is called, and correspond to his name of superior by his deeds.

Today, at the conclusion of Chapter II, Saint Benedict says:

The Abbot ought always to remember what he is, and what he is called, and to know that to whom more is committed, from him more is required.

For Saint Benedict, the form of address used in the monastery—the way we name each other—is not mere convention. It has a sacramental significance. Saint Benedict extends this principle even to the naming of things: “Let the Oratory be what it is called, a place of prayer” (Chapter LII). Here, in Chapter II, he sets forth the principle that he will develop in Chapter LXIII, that is, the principle of “remembering what one is called”.

Let the younger brethren, then, reverence their elders, and the elder love the younger. In calling each other by name, let none address another by his simple name; but let the elders call the younger brethren Brothers, and the younger call their elders Reverend Fathers, by which is implied the reverence due to a father. But let the Abbot, since he is considered to represent the person of Christ, be called Lord and Abbot, not that he hath taken it upon himself, but out of reverence and love for Christ. Let him be mindful of this, and shew himself to be worthy of such an honour. (Chapter LXIII)

We do not simply call one another by a title and a name; we also call one another to be faithful to the particular grace imparted to each one “for the perfecting of the saints, for the work of the ministry, for the edifying of the body of Christ” (Ephesians 5:12). As the Apostle says, “To every one of us is given grace, according to the measure of the giving of Christ” (Ephesians 4:7). When a junior calls a senior “Father”, he is, in effect, calling forth the grace of fatherhood in that senior. He is inviting him to be fatherly, and to make room, in their relationship, for the Holy Ghost by whom the grace of fatherhood is perfected and confirmed. In a similar way, when the abbot remembers “what he is, and what he is called”, he opens his manhood to the Holy Ghost by whom he is uniquely equipped for the tasks that, in God’s plan, fall to him. In a certain sense, what later authors fittingly call “grace of state” is, in Saint Benedict’s language, inseparable from “what one is, and what one is called”.

The abbot is, effectively, charged with the comprehensive care of that portion of the Body of Christ that is his monastic family. “To whom more is committed, from him more is required”. This is a daunting charge and, in order to carry it out faithfully, the abbot must live in the closest possible union with Christ. His union with Christ must be such that he enters unconditionally into His Priestly Prayer, losing his own prayers in the filial prayer of Christ:

The words which thou gavest me, I have given to them; and they have received them. . . . Holy Father, keep them in thy name whom thou hast given me; that they may be one, as we also are. (John 17:8,11)

Saint Benedict emphasises that the abbot is charged, not so much with the tasks of administration and building, as with ruling souls. “He must consider how difficult and arduous a task he hath undertaken, of ruling souls and adapting himself to many dispositions” (Chapter II). Saint Gregory the Great calls ruling souls “the art of arts”.  This is an art that requires a long apprenticeship. In a sense, the best commentary on Chapter II of the Holy Rule is Saint Gregory’s Pastoral Rule. In the first chapter of the Pastoral Rule, Saint Gregory says:

No one presumes to teach an art till he has first, with intent meditation, learned it. What rashness is it, then, for the unskilful to assume pastoral authority, since the government of souls is the art of arts! For who can be ignorant that the sores of the thoughts of men are more occult than the sores of the bowels? And yet how often do men who have no knowledge whatever of spiritual precepts fearlessly profess themselves physicians of the heart, though those who are ignorant of the effect of drugs blush to appear as physicians of the flesh! (The Pastoral Rule, Chapter I)

The Rule of Saint Benedict, the Second Book of the Dialogues of Pope Saint Gregory the Great, and the Pastoral Rule constitute an indispensable triology for the Benedictine abbot. These are the three books that, after Sacred Scripture, and alongside of the Institutes and Conferences of Cassian, must occupy a permanent place on the abbot’s bookshelf or, even, on his nightstand.

In the Pastoral Rule, Saint Gregory sets about explaining exactly what Saint Benedict says the abbot is to do.

The things that profit some often hurt others; seeing that also for the most part herbs which nourish some animals are fatal to others; and the gentle hissing that quiets horses incites whelps; and the medicine which abates one disease aggravates another; and the bread which invigorates the life of the strong kills little children. Therefore according to the quality of the hearers ought the discourse of teachers to be fashioned, so as to suit all and each for their several needs, and yet never deviate from the art of common edification. For what are the intent minds of hearers but, so to speak, a kind of tight tensions of strings in a harp, which the skilful player, that he may produce a tune not at variance with itself, strikes variously? And for this reason the strings render back a consonant modulation, that they are struck indeed with one quill, but not with one kind of stroke. Whence every teacher also, that he may edify all in the one virtue of charity, ought to touch the hearts of his hearers out of one doctrine, but not with one and the same exhortation. (The Pastoral Rule, Book III, Prologue)

For Saint Benedict, it is not enough that the abbot merely maintain the flock entrusted to him. Like any shepherd who invests himself entirely in his work, the abbot will want to see his flock increase. The work of accompanying men who, coming from diverse places and backgrounds, are asking to become monks is, in every way, as demanding and time–consuming as the work of being a father to those already clothed in the holy habit and living in the cloister. The abbot must make the words of the Apostle his own and repeat them often to the sons God has given him: “I most gladly will spend and be spent myself for your souls” (2 Corinthians 12:15).