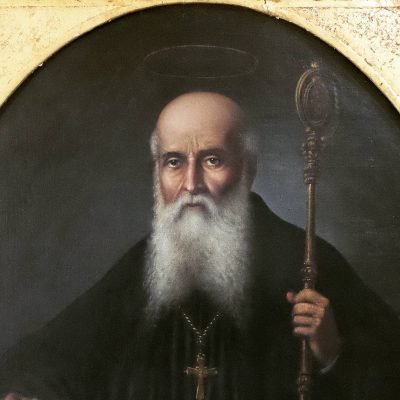 CHAPTER XLIII. Of those who come late to the Work of God or to Table
22 Mar. 22 July. 21 Nov.
At the hour of Divine Office, as soon as the signal is heard, let every one, leaving whatever he had in hand, hasten to the Oratory with all speed, and yet with seriousness, so that no occasion he given for levity. Let nothing, then, be preferred to the Work of God. And should any one come to the Night-Office after the Gloria of the ninety-fourth Psalm (which for this reason we wish to be said very slowly and protractedly), let him not stand in his order in the choir, but last of all, or in the place set apart by the Abbot for the negligent, so that he may be seen by him and by all, until, the work of God being ended, he have made satisfaction by public penance. The reason why we have judged it fitting for them to stand in the last place, or apart, is that, being seen of all, they may amend for very shame. For, if they were to remain outside the Oratory, some one perchance would return to his place and go to sleep, or at all events would sit down outside, and give himself to idle talk, and thus an occasion would be given to the evil one. Let him therefore enter, that he may not lose the whole, and may amend for the future. At the day Hours, let him who cometh to the Work of God after the Verse, and the Gloria of the first Psalm which followeth it, stand in the last place, as ordered above, and not presume to join with the choir in the Divine Office, until he hath made satisfaction: unless perchance the Abbot shall permit him so to do, on condition, however, that he afterwards do penance.

It is significant that we read this chapter on November 21st, the feast of the Blessed Virgin. In the fulness of time, as soon as the signal was given from heaven, the Child Mary inclined her ear and, forgetting her people and her father’s house, hastened into the temple there to carry out the Work of God. This is the deepest meaning of the Child Mary’s entrance into the temple: the primacy of the Work of God. The authors of the French School of Spirituality attached immense importance to this feast because it reveals in the Blessed Virgin, from her very infancy, the splendour of the virtue of religion.

Such as these, therefore, leaving immediately their own occupations and forsaking their own will, with their hands disengaged, and leaving unfinished what they were about, with the speedy step of obedience follow by their deeds the voice of him who commands; and so as it were at the same instant the bidding of the master and the perfect fulfilment of the disciple are joined together in the swiftness of the fear of God by those who are moved with the desire of attaining eternal life.

The signal for the Opus Dei is a summons to obedience. Woe to the monk who begins to grow slack in responding to the bells that enjoin him to stop his work and hasten without delay to the Work of God. Habitual tardiness at the Divine Office is a tell–tale symptom of acedia. The monk must draw upon actual grace to react manfully to the creeping paralysis that, over time, will render him incapable of stopping what he is doing in order to abandon himself to what God is doing. In so doing, the monk will enter in the first movement of the Heart of Jesus, upon coming into the world:

This Chapter also contains the phrase that, according to Pope Benedict XVI, is the supreme rule that motivated the Fathers of the Second Vatican Council to put before all else the Constitution on the Sacred Liturgy: “Let nothing, then, be preferred to the Work of God.” At a meeting with the clergy of Rome on 4 February 2013, Pope Benedict said:

I find now, looking back, that it was a very good idea to begin with the liturgy, because in this way the primacy of God could appear, the primacy of adoration. Operi Dei nihil praeponatur: this phrase from the Rule of Saint Benedict (cf. 43:3) thus emerges as the supreme rule of the Council. Some have made the criticism that the Council spoke of many things, but not of God. It did speak of God! And this was the first thing that it did, that substantial speaking of God and opening up all the people, the whole of God’s holy people, to the adoration of God, in the common celebration of the liturgy of the Body and Blood of Christ. In this sense, over and above the practical factors that advised against beginning straight away with controversial topics, it was, let us say, truly an act of Providence that at the beginning of the Council was the liturgy, God, adoration. (Pope Benedict XVI, Meeting with the Clergy of Rome, 4 February 2013)

This last public discourse of Pope Benedict XVI is a ringing affirmation of the primacy of God, the primacy of adoration. What is true for a Benedictine monastery—Let nothing, then, be preferred to the Work of God—is equally true of the Church universal and of every local church. A church that fails in this will, in the end, fail in all else as well. There is a page in the book In Sinu Jesu that makes clear why we monks and, indeed, all the Church cannot afford not to put God first by preferring nothing else to the Work of God:

When you chant the psalms, you are giving Me all that you hold in your heart and all that makes up your life. There is no human experience, no suffering—not even the evil that is sin—that cannot be tendered to Me by means of the psalmody of My Church. For this reason, it is a tragic loss and an immense woe when the psalmody of My Church falls silent in a land or in a diocese. It is a silence of death, like that of the netherworld in which no one intones a song of praise, a lament of repentance, a hymn of thanksgiving, an ode of love. My Church will be restored when the sound of her praises—the expression of My own praise of the Father in heaven—begins once again to echo from place to place, filling the nations of the earth with the sacrificium laudis. I came from heaven to bring to earth the liturgy of the heavenly sanctuary—wherein I, the Word, am the Priest and Great Doxologiser of My Father—so that My Church might give voice on earth to the mystery of My life from all eternity facing the Father and glorifying Him, and offering myself to Him in a ceaseless oblation of love to His love.

Let no one doubt of the singular efficacy of the Divine Office. When the Office ceases in a given place, there the Church has become mute; she has lost her voice; she no longer has the means by which I want her to pour out her heart in My presence. When the Church no longer intercedes, praises, thanks My Father, and weeps over sin, an icy deathlike silence begins to spread, not the silence of adoring love, but the silence of a tomb filled with corruption.

The renewal of the Church among the nations is intrinsically related to the restoration of the public celebration of My praises: to the restoration of the Divine Office, however humbly and simply, in all those places where it has fallen into abeyance. My bishops have the duty of providing for the solemn public worship of the churches in their care. For this reason, My Church, united in Council, was right to teach and uphold that a church in which there is no form of contemplative monastic life remains underdeveloped, stunted in the growth that I will to give her. I promise to bless every nation and every church in which the solemn celebration of the prayer of My Bride, the Church, is restored to honour and fostered. Therein My people, especially My people caught in the throes of suffering and in the shadow of death, will find a voice to express all that they bear within their hearts, and therein they will find a wellspring of joy: the sound on earth of the liturgy I ceaselessly celebrate in the courts of heaven. (3 December 2014)