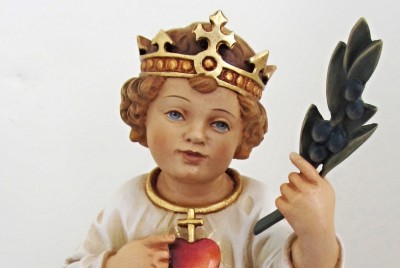 Let us give thanks to God the Father, who hath made us worthy to be partakers of the lot of the saints in light: Who hath delivered us from the power of darkness and hath translated us into the kingdom of the Son of his love, in whom we have redemption through his blood, the remission of sins: Who is the image of the invisible God, the firstborn of every creature: for in him were all things created in heaven and on earth, visible and invisible, whether thrones, or dominations,or principalities, or powers.  All things were created by him and in him. And he is before all: and by him all things consist. And he is the head of the body, the church: who is the beginning, the firstborn from the dead, that in all things he may hold the primacy: because in him, it hath well pleased the Father that all fulness should dwell: And through him to reconcile all things unto himself, making peace through the blood of his cross, both as to the things that are on earth and the things that are in heaven. (Colossians 1,12-20)

Lyrical, Jubilant, and Soaring
The Epistle of today’s Mass for the feast of Christ the King resounds like a classic Roman Preface; it is lyrical, jubilant, soaring, and shot through with a profound thanksgiving for all that the Father has done, in Christ, for His adopted children. The ear of my heart hears it sung to the tone of the Roman Preface. It seems to call for the great conclusion evoking all the angelic choirs, and for the cosmic symphony of the Sanctus.

In Sinu Patris
“And because you are sons, God hath sent the Spirit of his Son into your hearts, crying: Abba, Father.” (Galatians 4:6) An authentic Catholic piety, the piety of the Bride of Christ, His Church, hides us ever more deeply in the bosom of the Father, in sinu Patris, through the Son, by the secret operations of the Holy Ghost. All the richness of Catholic devotional life passes, ultimately, through the filtre of the sacred liturgy where it joins “the lot of all the saints in light” (Colossians 1:1:1): ad Patrem, per Filium, in Spiritu. Thus, the tenderness we feel for Jesus, King of Love, the confidence His image inspires, the way the devotion to the King of Love softens our hearts and melts our resistances to divine grace — all of these things carry us along into the powerful stream of the Church’s liturgical prayer, and through the liturgy, into the priestly mediation of Christ, who is “always living to make intercession for us.” (Hebrews 7:25)

The Church, Spouse of the King
It is the good pleasure of the Father to give us to the Son, to establish us under His sovereign lordship, and to make us subjects of His kingdom. In giving us to His only-begotten and beloved Son, our King, the Father restores order and right worship (orthodoxy) to a world skewed and disoriented by sin. The Son—Jesus, the King of Love—receiving us from the Father, makes us His own by the outpouring of His Blood. He espouse us to Himself as His own Bride upon the marriage bed of the Cross, and so leads us back to the Father, united to Himself as members to their Head, and as the Bride who forms one flesh with Him. Thus do the royal prerogatives of the Son become the royal prerogatives of His Bride, the Church, and of every soul united to the King of Love in the mystic nuptial graces of Baptism and Holy Communion. United in this way to the King, the Church—the Queen who stands at His right side arrayed in garments finely wrought of gold (Psalm 44:10)—addresses the Father with a majestic reverence, with a holy boldness, with words and gestures inspired by the Holy Ghost.

O Magnum Pietatis Opus
The sacred liturgy is the magnum pietatis opus of the Kingdom of Christ, that is, the great work of His own tender devotedness to the Father. One who takes upon himself the sweet and easy yoke of submission to the King of Love participates in His filial and priestly glorification of the Father. “Father, I will that where I am, they also whom thou hast given me may be with me; that they may see my glory which thou hast given me, because thou hast loved me before the creation of the world. (John 17:24)

The Opus Dei
The monastery—be it this little monastery or any other where the King of Love holds sway over all things —is an inbreaking of the Kingdom of Heaven on earth. We experience this inbreaking principally, objectively, and unfailingly, in the Opus Dei, the Work of God that is not so much our work done for God as His work in us and for us, and this through the sacred liturgy. The objectiveness of the Opus Dei trumps all our changing sentiments and human inconstancy, precisely because it is a divine work. Our participation in it, though real, does not make it what it is in the eyes of the Father and in the ears of His clemency. Christ, Priest and King, makes it what it is. 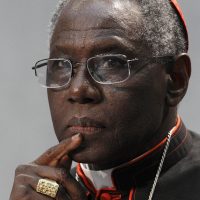 On a visit to the Benedictine monks of Norcia, His Eminence Robert Cardinal Sarah said:

Our part is to come to choir, to take our places, to open our books and our mouths, to stand, to bow, to kneel, and to do all of these things simply and quite imperfectly, in desolation or in consolation, with energy or in a state of weariness, with pious sentiments or without them, believing that the Opus Dei realizes what it announces, makes present what it describes, glorifies the Father in the sanctuary of heaven, and bears fruit in the vineyard of the Church on earth, and all of this because it is a royal action of Christ, Priest and King.

Act of Consecration
At the end of Holy Mass today, we shall renew our Act of Consecration to Jesus, King of Love. This is no mere pious formality. It is a response to the love with which He has first loved us. It is a radical renunciation of all those things to which we cling for an illusory security, so as to live in total reliance on His merciful goodness. It is a participation in His own filial devotedness to the Father: the friends of the King of Love share in all the dispositions and sentiments of His Heart. The Act of Consecration to Jesus, King of Love is not the liturgy, but it echoes the liturgy. It will prolong its grace, and make the work of the liturgy more fruitful in this house and in our souls.

Receive the Olive Branch
Finally, I am going to do something today that I would counsel you to do as well. Receive from the outstretched hand of the King of Love the olive branch that signifies both healing and peace. There is no torment of soul that He cannot calm. There is no suffering that He will not suffuse with redeeming love. There is no wound to which He will not apply the healing balm of the Holy Ghost. Say to Jesus, King of Love:

O Thou, Child King, willingly and confidently will I receive from Thee today all that Thou desirest to give me. Do Thou in me, O King of Love, all that Thou wouldst see accomplished in me, so as to draw out of my nothingness, out of my poverty, out of my struggles, and even out of the wreckage of my sins, peace and beauty for Thy Kingdom, praise for Thy mercies, and glory for Thy Father. Amen.