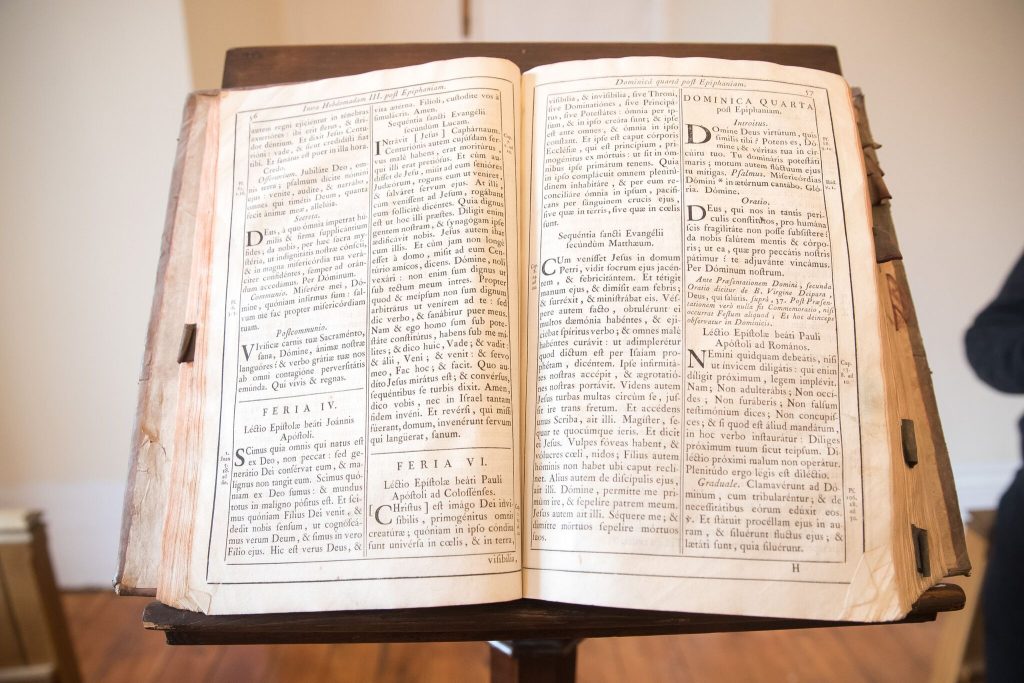 On Sunday let the brethren rise earlier for the Night-Office, which is to be arranged as follows. When six Psalms and a versicle have been sung (as already prescribed), all being seated in order in their stalls, let four lessons with their responsories be read from the book, as before: and to the last responsory only let the reader add a Gloria, all reverently rising as soon as he begins it. After the lessons let six more Psalms follow in order, with their antiphons and versicle as before; and then let four more lessons, with their responsories, be read in the same way as the former. Next let three canticles from the Prophets be said, as the Abbot shall appoint, which canticles are to be sung with an Alleluia. After the versicle, and the blessing given by the Abbot, let four more lessons from the New Testament be read as before; and at the end of the fourth responsory, let the Abbot begin the hymn, Te Deum laudamus. After the hymn, let the Abbot read the lesson from the Gospel, while all stand in awe and reverence. The Gospel being ended, let all answer Amen. Then let the Abbot go on with the hymn, Te decet laus; and after the blessing hath been given, let them begin Lauds. This order for the Night-Offices is always to be observed on Sunday, alike in summer and in winter, unless perchance (which God forbid) they rise too late, in which case the lessons or responsories must be somewhat shortened.* Let all care, however, be taken that this do not happen; but if it should, let him, through whose neglect it hath come to pass, make satisfaction for it in the oratory.

In all of the great liturgical traditions of East and West, the hearing of the Holy Gospel is preceded by praise and followed by praise, suggesting that, in some way, the liturgic Gospel itself, while it does both edify and instruct, is more than a mere edifying instruction. It is itself an offering of praise: the Word given by God in order that the Church may offer it back to Him. It is fitting, then, that following Saint Benedict’s prescriptions, the Holy Gospel be preceded by the Te Deum and followed immediately by the Amen and the Te Decet Laus.

Although we hear the same passage, year after year on the same Sundays and feasts, the Gospel remains always new. It comes to us fresh and fragrant with the very Breath of God. So often as the holy Gospel is proclaimed, the voice of “the Lord Christ, our true King” (Prologue:3) resounds in the Church. Nowhere is this mystery more striking than when the abbot chants the Gospel at the end of the Night Office.

For while all things were in quiet silence, and the night was in the midst of her course, Thy almighty word leapt down from heaven from thy royal throne, as a fierce conqueror into the midst of the land of destruction. (Wisdom 18:14–15)

The Gospel is a sacrament, a mystic enactment of the return of Christ. The community, having heard the Holy Gospel, respond with the eschatological Amen of the last page of the Apocalypse:

Surely I come quickly: Amen. Come, Lord Jesus. The grace of our Lord Jesus Christ be with you all. Amen. (Apocalypse 22:20–21)

No one, I think, has better expressed this profoundly Catholic sense of the reality underlying the Gospel than the English writer, Evelyn Underhill.

The reading of the liturgic Gospel is something more than a mere instruction of the faithful. It is a vital moment in the sacred action of the Church. In it Christ the Energetic Word speaks and acts. The ceremonial and reverence with which all the ancient rites surround it, the psalm of joy with which it was welcomed, the Alleluia which announced the Divine presence — also the sacred character which the Eastern Church still ascribes to the Book of the Gospels, and the deep awe with which its entrance is received — may serve to remind us that the words and deeds, indeed the very life of the Incarnate Logos, are themselves sacramental impartings of the Infinite God to man, and the proper causes of his adoring gratitude and joy. (The Mystery of Sacrifice, 9-10)

In some abbeys, a monk, attended by acolytes with lighted candles, takes the Book of the Gospels from the altar during the singing of the Te Deum, and carries it to the abbot standing in his stall in choir. In other places the abbot, having put on the stole, goes to the ambo standing in the very middle of the choir to proclaim the Gospel. “I proceeded and came forth from God,” says Jesus (John 8:42). This movement, in one or another form, signifies the sending forth of the Word by the Father, the holy condescension by which God enters and redeems our finite experience. The Word comes into our midst; He pitches His tent among us (John 1:14); He brings light into our darkness (John 1:9), joy into all our sorrows (John 16:22), and life into the valley of the shadow of death (Luke 1:79; John 11:25). Such was, according to Saint Athanasius, the experience of Saint Antony of Egypt, the father of monks, upon hearing the chanting of the Holy Gospel in church.

The Gospel of Matins, then, is not the mere reading of a holy text. It is the presence of the living Christ who utters a a creative word, a word that is divine, a word that contains within itself the power to transform our lives, to heal what is broken within us, to lift up the fallen, to give life to the dead. Rightly does our father Saint Benedict make it the shining summit of the Night Office.