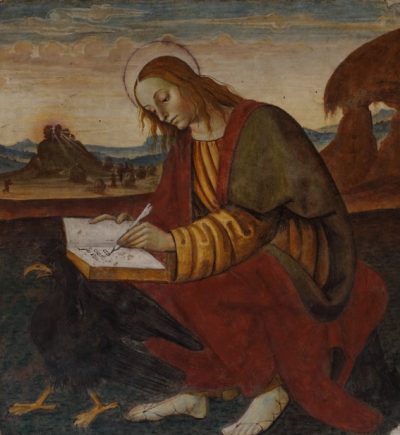 CHAPTER XXII. How the Monks are to sleep
27 Feb. 29 June. 29 Oct.
Let them sleep each one in a separate bed, receiving bedding suitable to their manner of life, as the Abbot shall appoint. If possible, let all sleep in one place: but if the number do not permit of this, let them repose by tens or twenties with the seniors who have charge of them. Let a candle burn constantly in the cell until morning. Let them sleep clothed, and girded with belts or cords – but not with knives at their sides, lest perchance they wound themselves in their sleep – and thus be always ready, so that when the signal is given they may rise without delay, and hasten each to forestall the other in going to the Work of God, yet with all gravity and modesty. Let not the younger brethren have their beds by themselves, but among those of the seniors. And when they rise for the Work of God, let them gently encourage one another, because of the excuses of the drowsy.

Saint Benedict’s first disciples embraced the literal application of Chapter XXII in all its details. We, following the practice of the many Benedictine reforms and revivals, give to each monk his own cell: a kind of enclosure within the enclosure, a desert space into which one can withdraw not only for sleep, but also for reading, prayer, and study. Over time, the term “dormitory” came to be applied to the part of the house in which the cells are situated or the corridor off which the cells open on both sides. In a house not built to be a monastery, such as ours, the cells are situated wherever they can conveniently and suitably arranged. We remain grateful to the benefactors who helped us complete the construction of the twelve new cells. Already, we look forward to the construction of nine more cells.

We read in the Sayings of the Desert Fathers that a brother in Scetis went to ask for a word from Abba Moses and the old man said to him, “Go and sit in your cell and your cell will teach you everything”. Saint Gregory tells us that Saint Benedict, after his unhappy experience with the feckless monks of Vicovaro, “dwelt alone with himself, in the sight of his Creator, who beholds the hearts of all men”. One of the first great struggles of a new brother is learning how to be still, and how to be content, in the cell. Long after the Desert Fathers and Saint Benedict, in 17th century France, the philosopher Pascal recognised modern man’s inability to be alone with himself and God:

Nothing is so insufferable to man as to be completely at rest, without passions, without business, without diversion, without study. He then feels his nothingness, his forlornness, his insufficiency, his dependence, his weakness, his emptiness. There will immediately arise from the depth of his heart weariness, gloom, sadness, fretfulness, vexation, despair. When I have occasionally set myself to consider the different distractions of men, the pains and perils to which they expose themselves at court or in war, whence arise so many quarrels, passions, bold and often bad ventures, etc., I have discovered that all the unhappiness of men arises from one single fact, that they cannot stay quietly in their own chamber. (Pensées)

A monk of Silverstream cannot remain all day long in his cell; he must go to choir, to work, to the refectory, and to wherever obedience sends him in the course of the day, but he should, nonetheless, be content to return to his cell and, imitating Saint Benedict, to spend there whatever free moments he can “alone with himself, in the sight of his Creator, who beholds the hearts of all men”. Certain things drive a monk out of his cell: untidiness, disorder, and the accumulation of superfluous clothes, books, pious trinkets, and other objects. A monk’s cell must be austere and, yet, sufficiently comfortable for him to want to stay in it; it is not excessive or in any way opposed to austerity to have decent heat and light, a comfortable chair, and some few things of beauty upon which the eye can rest.

A monastic cell has nothing in common with a university student’s room, nor with a bachelor’s flat, nor with a single man’s bedsit. It is a sacred place, a kind of enclosure with the enclosure, a virginal space to which the monk withdraws in order to be alone with himself and with the Bridegroom of his soul. “Therefore, behold I will allure her, and will lead her into the wilderness: and I will speak to her heart” (Osee 2:14). Even if the words spoken to the prophet Osee are not inscribed on the wall of one’s cell, they should be inscribed on every monk’s heart. The Statutes of the Carthusians, in treating of the cell, say:

This is holy ground, a place where, as a man with his friend, the Lord and his servant often speak together; there is the faithful soul frequently united with the Word of God; there is the bride made one with her spouse; there is earth joined to heaven, the divine to the human. The journey, however, is long, and the way dry and barren, that must be traveled to attain the fount of water, the land of promise. (Statutes, O. Cart., Chapter 4)

A Benedictine, no less than a Carthusian or a Camaldolese, must acquire the grace of love for the cell. A Benedictine ill at ease alone in his cell will be ill at ease everywhere else. The monk who has not learned how to live with himself will find it difficult to live with others and difficult to abide alone beneath the gaze of God. Many things interfere with the acquisition of this love for the cell: a nervous restlessness; a need for stimulation; a fear of being alone, silent, and still. In my own experience, there are four things that make the solitude of the cell sweet: (1) the presence of the Mother of God mediated through a worthy image of her; (2) the tranquillitas ordinis reflected in the tidiness and chaste beauty of one’s cell; (3)  love for the Word of God; (4) the prayer of the heart. I would emphasise the importance of the first of these four things because it reflects the unique grace of the Beloved Disciple: Et ex illa hora accepit eam discipulus in sua, “And from that hour, the disciple took her to his own” (John 19:27).