Skip to content
HomeEucharistic Face of ChristThe Transfiguration of the Lord 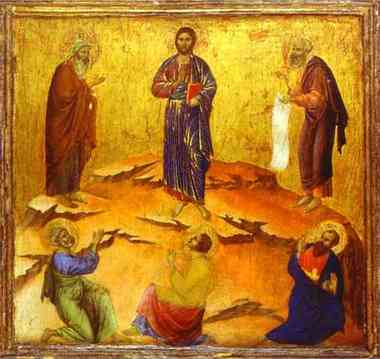 Gazing on the Holy Face
One-hundred-seventeen years ago, on August 5th, 1897, the eve of the feast of the Transfiguration, a young Carmelite stricken with tuberculosis had a very special desire. She wanted an image of the Holy Face of Christ placed close to her bed. The image was 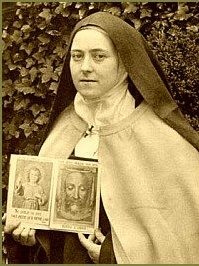 brought from the choir and attached to her bed curtains. On the following September 30th, she died. Her name? Thérèse of the Child Jesus and of the Holy Face. Saint Thérèse, a Doctor of the Church, fixed her gaze on the Face of Christ disfigured by suffering, and found the transfiguration of her own suffering in its radiance.

The Mystery of the Cross
The Holy Face of Christ was a mystery familiar to Thérèse. As a result of the good works of the Venerable Léon Dupont, the “Holy Man of Tours,” devotion to the Holy Face had spread throughout France. The Carmel of Lisieux honoured the Holy Face every August 6th, forty days before the feast of the Exaltation of the Holy Cross on September 14th. Every August 6th, the Carmelites exposed the image of the Holy Face in their choir, anointed it with perfume, and prayed before it.

Hidden in the Secret of His Face
A year before her death on August 6, 1896, Thérèse and two of the novices entrusted to her consecrated themselves to the Holy Face of Jesus. They understood the mystery of the Transfiguration just as the liturgy presents it to us today: as a preparation for the Mystery of the Cross. The three young Carmelites asked Our Lord to hide them “in the secret of His Face.” They were drawn by the Holy Ghost into the abjection of Christ, the Suffering Servant described in chapters 52 and 53 of the prophet Isaiah. They desired to be Veronicas, consoling Jesus in His Passion, and offering Him souls. Their prayer concluded: “O beloved Face of Jesus! As we await the everlasting day when we will contemplate your infinite Glory, our one desire is to charm your Divine Eyes by hiding our faces too so that here on earth no one can recognize us. O Jesus! Your Veiled Gaze is our Heaven!”

Lectio Divina and Eucharistic Adoration
At the very center of the Transfiguration we see the Human Face of God, shining more brightly than the sun. Tradition gives us two privileged ways of seeking, of finding, and of contemplating the transfigured and transfiguring Face of Christ: the first is lectio divina in its two forms: the corporate choral lectio divina of the Sacred Liturgy, and the solitary lectio divina that prolongs the Sacred Liturgy and prepares it. One who seeks the Face of Christ in the Scriptures as dispensed to us by the Church will discover the Face of the Beloved peering through the lattice of the text, and will be changed by the experience. The second way is Eucharistic adoration. One who remains silent and adoring before the Divine Host, the “Veiled Gaze: of Jesus, will, almost imperceptibly, but surely, be transfigured and healed in its radiance.

To Seek God
Monasteries exist for one thing only: to be places where souls seek God. And where is God to be found except in Christ? “The knowledge of the glory of God,” says Saint Paul, “is given to us in the Face of His Christ” (2 Cor 4:6). Today’s Introit is the liturgical expression of the whole monastic quest. “Thou hast said, ‘Seek ye my Face.’ My heart says to thee, ‘Thy Face, Lord, do I seek.’ Hide not thy Face from me” (Ps 27:8-9a). The Holy Ghost works in lectio divina and Eucharistic adoration to reproduce in us the traits of the Holy Face of Christ. The Holy Ghost is, in effect, the Divine Iconographer who traces in our souls the features of the Face of Christ.

Infinite Beauty
The Face of Christ is “the splendor before which every other light pales, and the infinite beauty which alone can fully satisfy the human heart” (Vita Consecrata, art. 16). How fitting that, in the Greek text of today’s gospel, Saint Peter’s cry can, in fact, be translated, “Lord, it is beautiful for us to be here” (Mk 9:5)! In the transfigured Face of Christ we discover, in the words of Saint Clare of Assisi, “Him who gave Himself totally for our love, whose beauty the sun and moon admire, whose rewards and their preciousness and greatness are without end” (Letter III to Agnes of Prague).

The Prophet Daniel
Consider the experience of the prophet Daniel, awestruck in the presence of the Son of Man. Like Peter, James, and John on the holy mountain, Daniel is dazzled by the raiment of the Son of Man, white as snow (Dan 7:9). Again, like Peter, James, and John who were “heavy with sleep” (Lk 9:32), Daniel falls on his face, “in a deep sleep with his face to the ground” (Dan 10:9). This is no ordinary sleep; it is rather a mysterious sleep induced by the awesome proximity of the Divine, not unlike the sleep of Adam described in Genesis. “So the Lord God caused a deep sleep to fall upon the man” (Gen 2:21).

Fear Not, Daniel
Daniel describes what happened then. “And behold, a hand touched me and set me trembling on my hands and knees” (Dan 10:10). The touch of the hand of the Son of Man raises Daniel from his complete prostration. “And he said to me, ‘O Daniel, man greatly beloved, give heed to the words that I speak to you, and stand upright, for now I have been sent to you.’ While he was speaking this word to me, says Daniel, I stood up trembling. Then he said to me, ‘Fear not, Daniel'” (Dan 10:11-12).

The experience of Daniel ends with him being told to stand upright. It is a kind of resurrection. This too, the call to stand upright, to take our place with the risen Son, facing the Father, in the Holy Ghost, is part of our own transfiguration into the victimal priesthood of Christ. The soul transfigured stands before the Father, joyful and free, certain of being greatly beloved, and invested with the noble beauty of Christ’s royal priesthood.

Holy Mass
In every celebration of Holy Mass, we ascend the mountain with Christ. In the reading of the Scriptures, Our Lord reveals His Face; and in the hearing of the Word we go, as the Vulgate puts it, “from clarity to clarity.” Today, Moses and Elijah attest to Christ, the fulfillment of the Law and of the Prophets, and point to the mystery of His Exodus by way of the Cross and tomb, from the regions of darkness and of death into the very light and life of the Father.

Passing from the Liturgy of the Word to the Liturgy of the Holy Sacrifice, we, like Peter, James, and John, see his glory, not with eyes of flesh, but with the eyes of faith and by the light of the Holy Ghost. We know Him really present in the bread become His Body and in the wine become His Blood and, like Peter, cry out, “Master, it is beautiful to be here” (Lk 9:33). The altar of the Holy Sacrifice is our Mount Tabor. Over the altar resounds the voice of the Father, “This is my Son, the Chosen One; listen to him” (Lk 10:35). Invisibly yet truly, mystically yet really, the altar — and all of us who from it partake of the Body and Blood of Christ — are enveloped in the cloud of the Holy Spirit and assumed into the grand priestly prayer of Christ to the Father.

Eucharistic Transfiguration
The grace of today’s festival is our own Eucharistic transfiguration. Our Lord would take each of us and all of us into His hands today, to become with Him, in the Holy Spirit, one single oblation to the Father. Without fear, give yourselves over as victims into the wounded hands of our glorious Priest. He will consecrate you with Himself in the Holy Sacrifice. Then the Father, looking down from heaven, will recognize in each of us the Holy Face of His Son, the Beloved, for by the mystery of the Eucharist we are “being changed into his likeness from one degree of glory to another” (2 Cor 3:18).