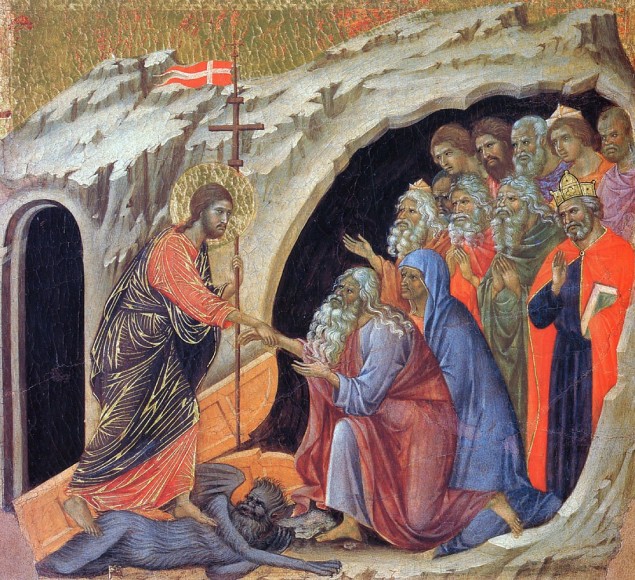 The Paschal Vigil of the Holy Night

Enveloped now in the bright cloud of the Spirit,
He stands, our priest before the Father,
forever alive, forever life-giving,
“holy, blameless, unstained,
separated from sinners, exalted above the heavens!” (Heb 7:26)
Christ is risen!

This is the night Eucharistic above all others!
This is the night of the Immolated Lamb,
the night made fragrant by the Holocaust that blazes
from altars too many to be counted
in East and West, and from pole to pole,
for Christ is risen!

This is of all Holy Masses the brightest:
the nocturnal Sacrifice by which every night is claimed for the light.
This is the night of burning hearts
and of the Bread of Angels in the mouths of men,
the night of the cup that overflows!
Christ is risen!

David sings the mystery
and the Church takes up his song!
This is the night foretold in prophecy:
“And the night shall be enlightened as the day;
and the night is my light and my delight” (Ps 138:12),
for Christ is risen!

In the beginning the heavens were splayed across the void
and the fabric of creation was woven by His hands:
a veil translucent upon the face of the earth,
finely woven that through it we might glimpse His glory!
Christ is risen!

In the beginning He made man in His image, in His likeness.
From the dust Adam emerged, facing the splendour of His glory:
the creature reflecting as in a mirror
the Uncreated Beauty from which all beauty springs.
Great was Adam’s grief,
terrible the laments of Eve,
when before their darkened eyes
descended the veil opaque and heavy,
the veil that they, by their sin, had pulled down hard and fast
like a window shade in time of war!
But now the long blackout of history is ended,
for Christ is risen!

“Look, my darling Eve,” says ancient Adam
in a creaking voice that has forgotten how to sing,
“is that the light of God I see?”
Behold, the peace of paradise,
for Christ is risen!

Shredded are the shades of night!
Sprung from their hinges the gates of the netherworld!
Unchained the chains, unbolted the bolts!
Christ is risen!

Eve, all bent earthward, stooped with the weight of the ages,
lifts her old gray head as if to examine the fruit on a branch,
then, leaning on her walking stick older than time
— Adam had cut it for her from the tree —
straightens her crooked back,
and opens her mouth to say:
Christ is risen!

He enters, the Warrior returned from battle,
the King covered with victory,
the Bridegroom “all radiant and ruddy,
distinguished among ten thousand” (Ct 5:10),
for Christ is risen!

The waters poured down for forty days and forty nights
leaving no one living, neither man nor beast, on the face of earth
save those who had enter through the door in the side of the ark
that Noe built, at God’s bidding.
Christ is risen!

Tonight old Noe raises his eyes and,
remembering the driving rain, the darkness, and the flood
sees before him what appears to be the door in the side of his ark,
and within the ark the glow of a blazing fire
—fornax ardens caritatis—
it is the heart of the God–Man,
its door thrust open by a lance,
and beyond its threshold the spatium laetissimum
with room for all the saved,
and an altar built unto the Lord,
and the sweet odour of holocaust
for Christ is risen!

Behold, the Ram caught in a thicket of thorns!
Behold, the gentle Lamb bound and laid upon the wood!
Behold, the Victim for the Altar!
Behold, the Offering in Love’s Undying Flame consumed!
Christ is risen!

Isaac, wide-eyed, looking on,
remembers well the day he was bound fast
and laid upon the altar
by his father’s trembling and tender hand.
He remembers the flash of the blade above his head
and, out of heaven, the voice:
“Abraham! Abraham! You have not withheld your son,
your only-begotten son from me!” (cf. Gen 22: 11-12).
“Oh, Father, now I see!
It is as you said:
‘God Himself will provide the Lamb, my son,’
for Christ is risen!”

Moses, wakened from his sleep,
shuffles out to see the sight,
brooding, grumbling as he goes.
“After forty years of leading them,
the stiff-necked, fickle, dull-witted lot,
could they not at least let a man retired take his rest!
And why that ringing of bells and tambourines?
Would not a slap of the clapper do?”
Not for a minute, my Lord Moses,
for Christ is risen!”

“Could they not have called on Joshua
to see whatever this marvel may be?
I, after all, have seen it all:
the plagues and the parting of the sea,
the pillar of cloud and the pillar of fire,
the rush of the waters, the fright of the steeds,
chariots sinking in the mud and Egyptians dead upon the shore!”
(He does not yet know that — Christ is risen!)
Then he sees Him whom once he knew,
the Friend with whom he spoke face to face (cf. Ex 33:11),
the Glory whose trail of splendour
he spied from the cleft of the rock (cf. Ex 33:22),
the Beloved Son who woke him briefly not so long ago
to converse with Him and with Elijah
of another exodus, His! (cf. Lk 28:31).
Christ is risen!

Behold Him now, more beautiful than on the heights of Thabor!
Then, “His face shone like the sun,
and his garments became white as light” (Mt 17:2),
but now, there are no words to describe him,
for Christ is risen!

He comes, the Lover back from combat,
with shining shards of ruby brightness
slashing through his hands and feet!
“His head is the finest gold;
his locks are wavy,
black as a raven” (Ct 5:11),
and across his forehead
a ring of cut diamonds, an incision of stars!
Christ is risen!

“‘I hid my Face from you’ (Is 54:8), it is true,
shroud and veil covered me,
a stone, the seal upon my tomb,
but now my Face unveiled would be your feast,
your tabernacle, your paradise.
Christ is risen!

Not mine, says the Lord, to think as you think,
nor to deal as you deal.
I am the sower’s fresh seed;
I am bread in every hungry mouth.
I am the Warrior–Word come down,
while all things were in silence, from my starry throne,
into the midst of a land of destruction.”
Its citadel was the tomb,
its stronghold the grave,
but He sped on His errand,
entombing the tomb.
See, His feet stand immoveable on the face of the earth
and His piercèd hand He holds the galaxies!
Deus infernum vicit et astra tenet!
Christ is risen!

Tonight is the festival of the destitute,
the homecoming of the wanderer,
the hospitality of the heavens thrown open to the earth!
For Christ is risen!

Tonight there is water in abundance,
for feet and hands and face and head!
Tonight, for our lips, there is something sweeter than honey!
Tonight there is a Chalice brimming with the fruit of the vine!
Tonight there is Bread from heaven to strengthen every heart,
supersubstantial, and having within it all delight,
for Christ is risen!

“Ah,” I hear you say, “my fasting was not all it could have been,
and, often, from abstinence I abstained!
My penitence was paltry,
and my prayer-time bound to the miserly measure of the clock!
In giving alms I was stiff-necked and stingy,
and when I tried to bend my mind to the Scriptures
it was my feeble head that bent in sleep!
This feast, I fear, is not for me!”
Nonsense! For Christ is risen!

Tonight all is given away:
pardon for sinners,
healing for the sick,
laughter for weepers,
a song for the sullen,
and for those who have nothing — everything!
Christ is risen!

Tonight no one gets what he deserves!
Each one gets what he has not earned:
“What no eye has seen, nor ear heard,
nor the heart of man conceived,
what God has prepared for those who love Him” (1 Cor 2:9),
for Christ is risen!

After Moses, after David and the Prophets,
after Sidrach, Misach, and Abdenago,
after the din of horn, flute, harp, zither, dulcimer, and pipe,
after the coolest of songs from the midst of the flames,
after the summons of the saints into a symphony of supplications
—orate pro nobis—
the Apostle draws a breath and speaks:
«Heavenly–minded must you be,
Death has wrested every earthly bauble from your hands.
Tonight your life is where your Treasure is,
Hidden away with Christ in God,
for Christ is risen!»

Mary Magdalene and the other Mary
ran before us to the tomb!
The earth shook and shifted, jumped and heaved!
“What cosmic dance is this?” they asked,
as over rocks and rills they sped,
while beneath their feet the road to His tomb
cracked like the shells of Easter eggs!
Christ is risen!

And then they saw it all:
the gracious Angel seated on the stone,
dazzling brightness,
blinding whiteness,
guards, first shaking like leaves in the breeze,
and then stiff as dead men for fear!
“Do not be afraid;
for I know that you seek Jesus who was crucified.
He is not here, for he has risen as he said.
Come see the place where he lay” (Mt 28:6).
Christ is risen!

To them it was announced, yes,
but the Mother . . . the Mother already knew!
She, the first in this night, as in the night of Bethlehem,
to behold the Human Face of God!
Christ is risen!