Skip to content
HomeAdoration of the Most Holy Sacrament of the AltarWhat Have I Done to Thee? 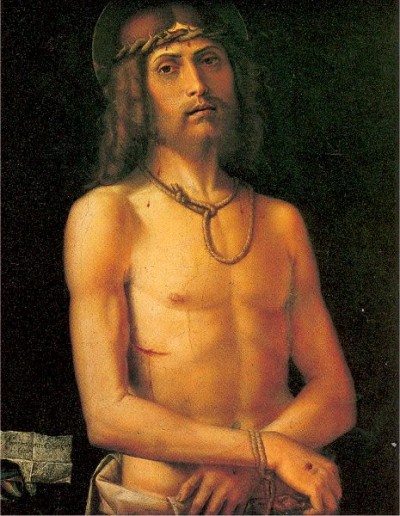 Answer Thou Me
Today’s Feast of Reparation for offenses committed against Our Lord in the Sacrament of His Love was instituted in the 17th century when, particularly in a France ravaged by the Thirty Years War (1618—1648), churches were desecrated and burned, the Most Blessed Sacrament was thrown to the ground, trampled, and even fed to animals. Bands of mercenary soldiers descended from the Protestant countries of Northern Europe to pillage and destroy everything that represented the Catholic Faith. Two things, in particular, became the object of their fanatical wrath: images of the Blessed Virgin Mary and the Most Holy Sacrament of the Altar.

At the same time, in certain ostensibly Catholic circles, there was a surge of interest in black magic and in engagement with the powers of darkness. Not infrequently, Sacred Hosts were stolen from churches, or taken away surreptitiously after a sacrilegious communion. Too many priests were seen to offer Holy Mass hurriedly and with scant reverence. Tabernacles were neglected. Churches were forsaken. The King of kings and Lord of lords (Apocalypse 19:16), the Thrice–Holy God before whom the Angels veil their faces and adore, hidden beneath the fragile appearance of the Sacred Host, remained silent in a state of utter abjection, abandoned to the coldness, indifference, and carelessness of men. “O my people, what have I done to thee, or in what have I molested thee? answer thou me” (Micheas 6:3).

Sorrowing Love
A multitude of souls, grieved by the offenses committed against Our Lord in the Sacrament of His Love, sought to make up for the honour, reverence, adoration, gratitude, and love that others refused Him.  Believing hearts were pierced through with a sorrowing love. The Holy Ghost inspired a vast movement of compunction and reparation that came, over time, to find expression in the sacred liturgy itself. A special Mass and Office were composed by which the Church approved this movement of compunction and reparation. Mother Mectilde de Bar entered wholeheartedly into this movement and, in some way, made its essential thrust so much her own that it came to be identified with the Benedictine monasteries of perpetual adoration that she generated.

The true Body and Blood of Jesus Christ
One might think that all of this belongs to the past, that things have changed since the dark and turbulent days of 17th century France, but this, alas, is not so. Remember recent events in Pamplona and in Fontainebleau.  The desecration of churches and sacrilegious offenses against the Most Holy Sacrament of the Altar proliferate. The distribution of Holy Communion in the hand, notably, has led to every manner of irreverence. Sacred Hosts have been found on the floor of churches, stuck into the pages of books, and lying on pews. The disappearance of the Communion rail; the widespread practice of priest and people facing each other during the Holy Sacrifice; the indiscriminate use of Extraordinary Ministers of Holy Communion in ordinary circumstances — all of these things have contributed to a massive loss of faith in the real presence of Our Lord in the Blessed Sacrament and in Holy Mass as the perfect Sacrifice of Calvary offered in unbloody manner. Many of those who present themselves for Holy Communion have no notion of what the Church believes and teaches: that this is no mere bread of holy remembrance, but is the true Body and Blood of Jesus Christ, Priest and Victim: the very Body and Blood formed by the Holy Ghost in the womb of the Virgin Mary, nailed to the wood of the Cross, gloriously risen from the tomb, ascended into the heavenly sanctuary, and coming in majesty at the end of time to judge the living and the dead.

When you see It [the Body of Christ] exposed, say to yourself: This is that body which was once covered with blood, pierced by a lance, from which issued saving fountains upon the world, one of blood and the other of water. . . This body He gave to us to keep and eat, as a mark of His intense love. (Quoted by Pope Pius XII in Mediator Dei, art. 134)

One That Would Comfort Me
The frequent visit to “Holy God” hidden in the tabernacles of our churches that was, for so long, a hallmark of Irish Catholic piety has, for the most part, fallen into oblivion. Churches, when they are not locked outside of the times of Holy Mass, are empty places. Hidden, silent, and yearning for the companionship of men, Our Lord in the tabernacle waits. “And I looked for one that would grieve together with me, but there was none: and for one that would comfort me, and I found none” (Psalm 68:21).

I remain unknown.
I am left alone.
Even those who claim to profess
the mystery of My real presence
in the Sacrament of the Altar
forsake Me.
I am treated with a terrible indifference,
with coldness,
and with a lack of respect
that causes the Angels to weep
because they cannot offer me reparation
for the coldness and indifference of human hearts.
Only men can make reparation for men.

God My Portion Forever
The Collect of today’s Mass expresses the sentiments all that we believe and would want to say:

Lord Jesu, drawing nigh with boldness to the throne of grace, we pray thee mercifully to behold and hear our prayer: that thy glory, which in the Sacrament of thy love is outraged perpetually by the blasphemies of wicked men, may by the perpetual worship of thy household be repaired.

Only by the Father’s grace are we numbered among those who belong to the household of God. We are, in a real sense, children re–born by the grace of Holy Baptism, to a life of extraordinary privilege. This is something that causes the Angels themselves to catch their breath in wonder: God calling the likes of us to intimacy with Himself. “Behold, I stand at the gate, and knock. If any man shall hear my voice, and open to me the door, I will come in to him, and will sup with him, and he with me” (Apocalypse 3:20). He who deigns to sup with us gives us His Body for food and His Blood for drink. And then . . . He remains present, waiting, expectant, lest we be deprived of His companionship and sink into a loneliness for which nothing earthly can supply.

Thou hast held me by my right hand; and by thy will thou hast conducted me, and with thy glory thou hast received me. For what have I in heaven? and besides thee what do I desire upon earth? For thee my flesh and my heart hath fainted away: thou art the God of my heart, and the God that is my portion for ever. For behold they that go far from thee shall perish: thou hast destroyed all them that are disloyal to thee. But it is good for me to adhere to my God. (Psalm 72:24–28)