There is such peace and security for souls in this teaching of Saint Hilary on the fatherhood of God. Much of the inward suffering of people is rooted in their ignorance of God as Father. Were the Fatherhood of God preached in our churches — better known, and experienced in prayer — we would see innumerable graces of inner healing, liberation from anxiety, and growth in love. 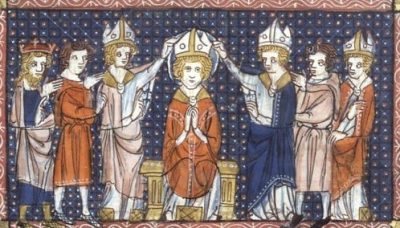 Saint Hilary of Poitiers
Dear Brothers and Sisters, today, I would like to talk about a great Father of the Church of the West, Saint Hilary of Poitiers, one of the important Episcopal figures of the fourth century. In the controversy with the Arians, who considered Jesus the Son of God to be an excellent human creature but only human, Hilary devoted his whole life to defending faith in the divinity of Jesus Christ, Son of God and God as the Father who generated him from eternity.

Quest for the Truth
We have no reliable information on most of Hilary’s life. Ancient sources say that he was born in Poitiers, probably in about the year 310 A.D. From a wealthy family, he received a solid literary education, which is clearly recognizable in his writings. It does not seem that he grew up in a Christian environment. He himself tells us of a quest for the truth which led him little by little to recognize God the Creator and the incarnate God who died to give us eternal life.

Exile
Baptized in about 345, he was elected Bishop of his native city around 353-354. In the years that followed, Hilary wrote his first work, Commentary on St Matthew’s Gospel. It is the oldest extant commentary in Latin on this Gospel. In 356, Hilary took part as a Bishop in the Synod of Béziers in the South of France, the “synod of false apostles”, as he himself called it since the assembly was in the control of Philo-Arian Bishops who denied the divinity of Jesus Christ. “These false apostles” asked the Emperor Constantius to have the Bishop of Poitiers sentenced to exile. Thus, in the summer of 356, Hilary was forced to leave Gaul.

On the Trinity
Banished to Phrygia in present-day Turkey, Hilary found himself in contact with a religious context totally dominated by Arianism. Here too, his concern as a Pastor impelled him to work strenuously to re-establish the unity of the Church on the basis of right faith as formulated by the Council of Nicea. To this end he began to draft his own best-known and most important dogmatic work: De Trinitate (On the Trinity). Hilary explained in it his personal journey towards knowledge of God and took pains to show that not only in the New Testament but also in many Old Testament passages, in which Christ’s mystery already appears, Scripture clearly testifies to the divinity of the Son and his equality with the Father. To the Arians he insisted on the truth of the names of Father and Son, and developed his entire Trinitarian theology based on the formula of Baptism given to us by the Lord himself: “In the name of the Father and of the Son and of the Holy Spirit”.

The Father and the Son
The Father and the Son are of the same nature. And although several passages in the New Testament might make one think that the Son was inferior to the Father, Hilary offers precise rules to avoid misleading interpretations: some Scriptural texts speak of Jesus as God, others highlight instead his humanity. Some refer to him in his pre-existence with the Father; others take into consideration his state of emptying of self (kenosis), his descent to death; others, finally, contemplate him in the glory of the Resurrection.

A Spirit of Reconciliation
In the years of his exile, Hilary also wrote the Book of Synods in which, for his brother Bishops of Gaul, he reproduced confessions of faith and commented on them and on other documents of synods which met in the East in about the middle of the fourth century. Ever adamant in opposing the radical Arians, Saint Hilary showed a conciliatory spirit to those who agreed to confess that the Son was essentially similar to the Father, seeking of course to lead them to the true faith, according to which there is not only a likeness but a true equality of the Father and of the Son in divinity. This too seems to me to be characteristic: the spirit of reconciliation that seeks to understand those who have not yet arrived and helps them with great theological intelligence to reach full faith in the true divinity of the Lord Jesus Christ.

On the Psalms
In 360 or 361, Hilary was finally able to return home from exile and immediately resumed pastoral activity in his Church, but the influence of his magisterium extended in fact far beyond its boundaries. A synod celebrated in Paris in 360 or 361 borrows the language of the Council of Nicea. Several ancient authors believe that this anti-Arian turning point of the Gaul episcopate was largely due to the fortitude and docility of the Bishop of Poitiers. This was precisely his gift: to combine strength in the faith and docility in interpersonal relations. In the last years of his life he also composed the Treatises on the Psalms, a commentary on 58 Psalms interpreted according to the principle highlighted in the introduction to the work: “There is no doubt that all the things that are said in the Psalms should be understood in accordance with Gospel proclamation, so that, whatever the voice with which the prophetic spirit has spoken, all may be referred nevertheless to the knowledge of the coming of Our Lord Jesus Christ, the Incarnation, Passion and Kingdom, and to the power and glory of our resurrection” (Instructio Psalmorum, 5). He saw in all the Psalms this transparency of the mystery of Christ and of his Body which is the Church.

Saint Hilary and Saint Martin
Hilary met Saint Martin on various occasions: the future Bishop of Tours founded a monastery right by Poitiers, which still exists today. Hilary died in 367. His liturgical Memorial is celebrated on 13 January. In 1851 Blessed Pius IX proclaimed him a Doctor of the universal Church.

Baptismal Faith
To sum up the essentials of his doctrine, I would like to say that Hilary found the starting point for his theological reflection in baptismal faith. In De Trinitate, Hilary writes: Jesus “has commanded us to baptize in the name of the Father and of the Son and of the Holy Spirit (cf. Mt 28: 19), that is, in the confession of the Author, of the Only-Begotten One and of the Gift. The Author of all things is one alone, for one alone is God the Father, from whom all things proceed. And one alone is Our Lord Jesus Christ, through whom all things exist (cf. I Cor 8: 6), and one alone is the Spirit (cf. Eph 4: 4), a gift in all…. In nothing can be found to be lacking so great a fullness, in which the immensity in the Eternal One, the revelation in the Image, joy in the Gift, converge in the Father, in the Son and in the Holy Spirit” (De Trinitate 2, 1). God the Father, being wholly love, is able to communicate his divinity to his Son in its fullness. I find particularly beautiful the following formula of St Hilary: “God knows not how to be anything other than love, he knows not how to be anyone other than the Father. Those who love are not envious and the one who is the Father is so in his totality. This name admits no compromise, as if God were father in some aspects and not in others” (ibid., 9, 61).

The Way to Christ Is Open to All
For this reason the Son is fully God without any gaps or diminishment. “The One who comes from the perfect is perfect because he has all, he has given all” (ibid., 2, 8). Humanity finds salvation in Christ alone, Son of God and Son of man. In assuming our human nature, he has united himself with every man, “he has become the flesh of us all” (Tractatus super Psalmos 54, 9); “he took on himself the nature of all flesh and through it became true life, he has in himself the root of every vine shoot” (ibid., 51, 16). For this very reason the way to Christ is open to all – because he has drawn all into his being as a man -, even if personal conversion is always required: “Through the relationship with his flesh, access to Christ is open to all, on condition that they divest themselves of their former self (cf. Eph 4: 22), nailing it to the Cross (cf. Col 2: 14); provided we give up our former way of life and convert in order to be buried with him in his baptism, in view of life (cf. Col 1: 12; Rom 6: 4)” (ibid., 91, 9).

Reflection Transformed into Prayer
Fidelity to God is a gift of his grace. Therefore, St Hilary asks, at the end of his Treatise on the Trinity, to be able to remain ever faithful to the baptismal faith. It is a feature of this book: reflection is transformed into prayer and prayer returns to reflection. The whole book is a dialogue with God. I would like to end today’s Catechesis with one of these prayers, which thus becomes our prayer:

Keep, I pray You, this my pious faith undefiled, and even till my spirit departs, grant that this may be the utterance of my convictions: so that I may ever hold fast that which I professed in the creed of my regeneration, when I was baptized in the Father, and the Son, and the Holy Spirit. Let me, in short, adore You our Father, and Your Son together with You; let me win the favour of Your Holy Spirit, Who is from You, through Your Only-begotten Son. Amen.