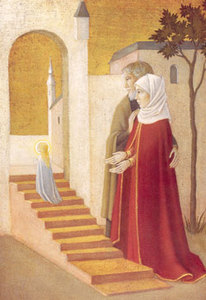 Go to Be an Offering and a Fragrant Incense
Today’s feast is Eastern in origin, Eastern in sensibility. To taste its mystery one has to hear and meditate the poetry with which the Byzantine tradition celebrates it. In one of the texts prescribed for Great Vespers, the Church sings:

When Anne, which means grace, was graced with the pure and ever-virgin Mary, she presented her into the temple of God. She called maidens to carry candles and walk before her as she said: ‘O child, go to be an offering and a fragrant incense for the One who sent you to me. Enter into the veiled places and learn the mysteries of God. Prepare yourself to be a delightful dwelling-place for Jesus who will give great mercy to the world.

The First Presentation
The presentation of Mary in the Temple prefigures the presentation of Mary in the Temple of the heavenly Jerusalem, the mystery of her Assumption. In the first presentation, the child Mary, fulfilling the psalmist’s prophecy, is “led to the king with her maiden companions” (Psalm 44:15). A sacred legend recounts that the child Mary entered the courtyard of the Temple dancing for joy, continued into the Holy Place, climbed the fifteen steps of the staircase leading to the Holy of Holies and, to the amazement of Zechariah and the other priests, penetrated beyond the veil. No one dared to stop her. All were overcome with a holy fear. Even the Angels looked on with astonishment.

The Second Presentation
In the second presentation, that of her Assumption, Mary enters heaven itself escorted by angels. She penetrates beyond the veil to take her place with Christ “in the sanctuary and the true tent which is set up not by man but by the Lord” (Hebrews 8:2). Mary’s second presentation in the Temple fulfills what was foreshadowed in the first. Mary is the mother of “the hope set before us” (Hebrews 6:18). She is given us as “a sure and steadfast anchor of the soul, a hope that enters in even within the veil, where Jesus has gone as a forerunner on our behalf, having become a high priest forever after the order of Melchisedech” (Hebrews 6:19-20).

Joys and Sorrows
Between these two presentations Mary grew up; she was betrothed to Joseph, said her “Yes” to the Angel and was overshadowed by the Holy Spirit. She conceived her Son and carried Him for ninth months in her womb. She nursed Him at her breast, “brought Him up to Jerusalem to present Him to the Lord” (Luke 2:22), carried Him into exile in Egypt, and returned with Him to the silence of Nazareth. She suffered anguish when at the age of twelve Jesus disappeared for three days, only to be found in the Temple. He called it “His Father’s house” (Luke 2:49).

At Cana Our Lady spoke boldly to Jesus on behalf of a couple in need; then, turning to the servants, she uttered a prophetic word intended by the Holy Spirit for all of us: “Do whatever He tells you” (John 2:5). One day when He was teaching, she appeared outside wishing to speak to Him, only to hear that her own motherhood had become the model of another, a mystical motherhood extended to the disciples of her Son, those who do the will of His heavenly Father (cf. Matthew 12:50).

On Calvary the prophecy of Simeon in the Temple was fulfilled: the long-awaited sword of sorrow pierced her soul (cf. Luke 2:35). “Standing at the cross of Jesus” (John 19:25) her unique motherhood was painfully and wondrously enlarged to embrace a multitude of sons and daughters. Saturday’s immense and terrible silence followed and since that time Saturday has been her day. He rose as He said He would—sicut dixit—filling her soul with indescribable jubilation. Then there was the “unutterable and exalted joy” (1 Peter 1:8) of the Ascension. In the upper room she poured herself out in prayer with the others (cf. Acts 1:14). And finally, without a doubt Mary was among those whom Saint Luke, in the last line of his gospel, describes as “continually in the Temple blessing God” (Luke 24:53).

Enter Into the Veiled Places
In some way, today’s feast provides you, dear Brother Mikkel, with a paradigm for your entrance into the noviceship. We all live between two presentations: the consecration of baptism and the hour of our death. Today the Byzantine liturgy puts strange and wonderful words in the mouth of Saint Anne. She is speaking to the Child Mary. In some way, Saint Anne’s words are addressed to you, dear son: “Go to be an offering and a fragrant incense. . . . Enter into the veiled places and learn the mysteries of God. Prepare yourself to be a delightful dwelling-place for Jesus who will give great mercy to the world.”