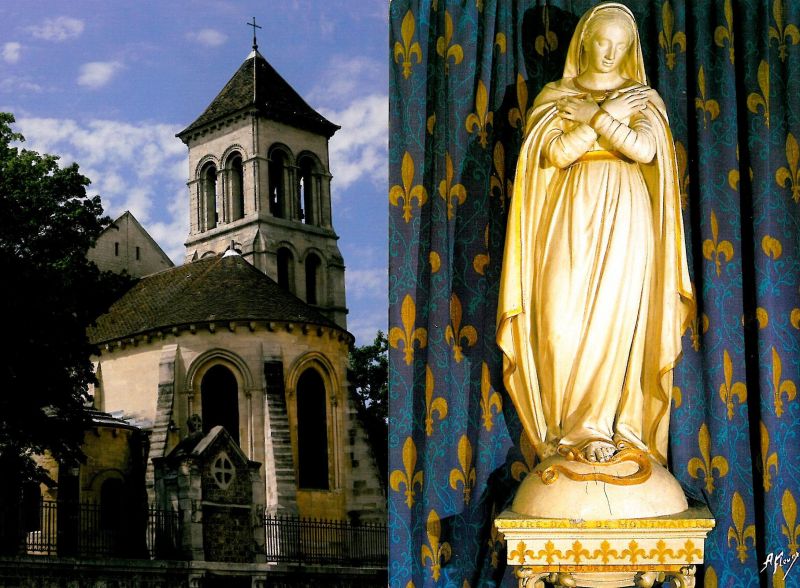 Pilgrimage and Enclosure
When one thinks of the Benedictine ideal, one imagines monks behind their enclosure walls, buried deep in a kind of unshakeable stability. In spite of Chaucer’s Canterbury Tales, one does not usually associate pilgrimages with monks and nuns. Pilgrimages remain exceptional for monks and nuns, but they are not unknown. Many a monastic vocation has been consolidated and restored by sending a man on pilgrimage, and many a monk has obtained special graces while praying in a place sanctified by a sacred image or apparition of the Mother of God, or marked by the miracles wrought by a saints. There are two significant pilgrimages in the life of Catherine–Mectilde de Bar. The first was to a humble Marian sanctuary, and the second was to the famous Mont Saint–Michel. So much for a narrowly legalistic conception of monastic enclosure! The saints are wonderfully free with the sublime freedom of the children of God. They are free within the constraints of the law, and free when obliged to press through its constraints, always acting in obedience to the Church and under the sway of the Holy Spirit’s seven gifts.

Homeless Benedictines
In 1639 Mother Mectilde and her Benedictines, like so many refugees of the Thirty–Years War, took to the road in search of a safe home. One of Saint Vincent de Paul’s priests, a certain Julien Guérin, sought to arrange hospitality for them at the Abbey of Montmartre in Paris. The abbess of Montmartre refused to receive the homeless Benedictines professed to the same Rule as herself and the nuns of her great abbey; the abbess argued that the admission of strangers into religious houses caused disorder, and that it was better to refuse the nuns hospitality than to have to turn them out later for unsuitable conduct.

Pilgrimage to Benoîte-Vaux
Mother Mectilde was saddened but undaunted. Five leagues away from Saint-Mihiel, towards the city of Verdun, a little to the left of the course of the Meuse, there was valley made famous by the miraculous revelation of a statue of the Blessed Virgin to a group of lumberjacks, and by the manifestation of Angels singing Ave Maria. (Interesting detail: Had Mother Mectilde followed the Meuse north, she would have arrived in Tegelen in The Netherlands where her daughters have a monastery to this day.) The sanctuary built on the spot was a place of pilgrimage. Mother Mectilde, together with two other nuns, set out on foot for the sanctuary of Notre-Dame de Benoîte-Vaux on 1 August 1641. Upon arrival there, they entrusted their written petition to a Premonstratensian in attendance, who placed it on the altar. Prostrate at the feet of the Blessed Virgin, Mother Mectilde and her companions spent the whole night imploring her protection and assistance. They heard Holy Mass and received Holy Communion at 4:00 in the morning on the second day of August; it was the feast of Our Lady of the Angels. With all possible fervour they recommended their sorry plight again to the Mother of God. The fervent pilgrims begged, above all, for the grace of knowing the will of God; they further asked to be spared the outrages perpetrated by soldiers, and to find some Benedictine houses willing to take them in, so that they might persevere in their monastic consecration.

Our Lady’s Answer
When the little band of pilgrims returned to Saint-Mihiel, it was obvious to all who saw Mother Mectilde and her two companions that they had received extraordinary graces; they seemed transfigured. Much later, Mother Mectilde let slip a few words intimating that, in the sanctuary of Benoîte-Vaux, Our Lady revealed to her God’s designs on her life. A few days after the pilgrimage, a commissary of Monsieur Vincent (Saint Vincent de Paul), named Mathieu Renard, asked to see the prioress and, with no preliminaries, said, “I have come, Mother, to take two of your religious to Montmartre, I have orders to do this, and Madame the Duchess of Aiguillon has provided me with money for the journey”.

An Abbess Changes Her Mind
What happened that caused the abbess of Montmartre to have so complete a change of heart? On the very night that Mother Mectilde and her companions were praying at the sanctuary of Benoîte-Vaux, the abbess of Montmartre woke up all of a sudden and summoned the two attendants who slept in her bedchamber. The abbess was in a dreadful state of fright. It seemed to her, she said, that she saw the Most Holy Virgin and her Divine Son reproaching her for her lack of hospitality; they threatened her with a rigourous judgment should the poor homeless Benedictines, through her fault, perish in their misery and need. The next day the Abbess convened her senior religious; all agreed that they had to execute the manifest will of God.