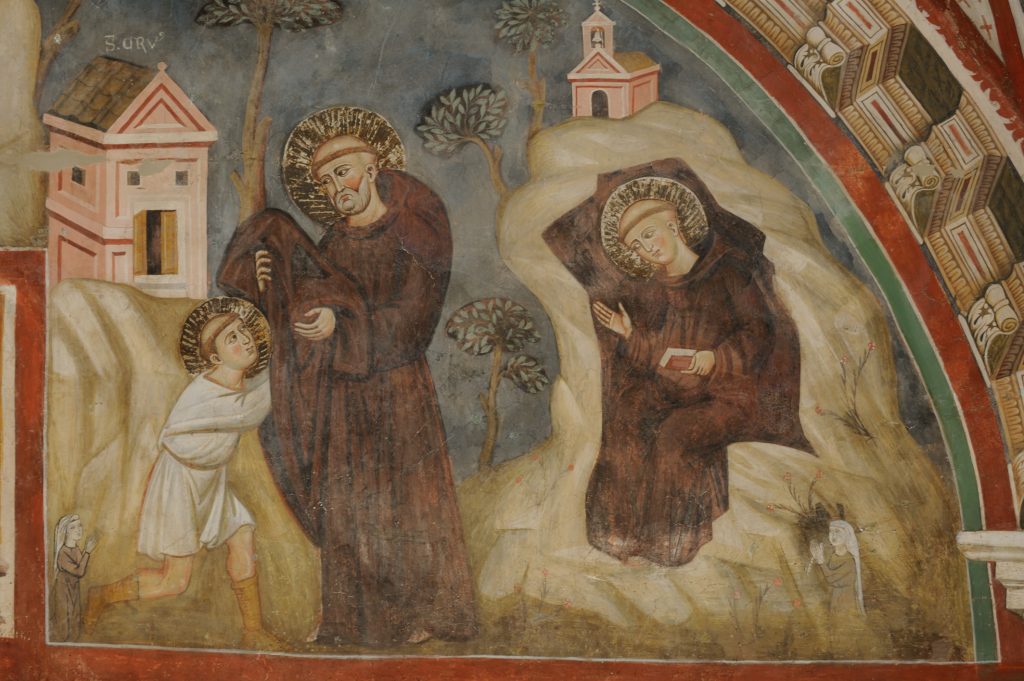 Let the younger brethren, then, reverence their elders, and the elder love the younger. In calling each other by name, let none address another by his simple name; but let the elders call the younger brethren Brothers, and the younger call their elders Fathers, by which is implied the reverence due to a father. But let the Abbot, since he is considered to represent the person of Christ, be called Lord and Abbot, not that he hath taken it upon himself, but out of reverence and love for Christ. Let him be mindful of this, and shew himself to be worthy of such an honour. Wherever the brethren meet one another, let the younger ask a blessing from the elder. And when the elder passeth by, let the younger rise, and give place to him to sit down; nor let the younger presume to sit with him, unless the elder bid him, that it may come to pass as it is written: “In honour preferring one another.” Let young children and boys take their places in the Oratory, or at table, with all due discipline. In other places also, wherever they may be, let them be under proper care and discipline, until they come to the age of understanding.

By the mystery of the Word made flesh the light of Thy glory hath shone anew upon the eyes of our mind: that while we acknowledge Him to be God seen by men, we may be drawn by Him to the love of things unseen.

The Human Icon of Christ
Every member of the community, be he young or old, is an icon of Christ. The reverence shown to a brother reaches Christ Himself, according to the saying of Saint John Damascene: “The honor paid to an icon is transferred to its prototype”. The Benedictine devotion to Christ is, effectively, translated into the reverence that characterises our relations with one another.

Brothers
The title “Brother” is an acknowledgment of the relationship that, by grace, exists among sons of the same Father. One who acknowledges his brother, by the very fact, honours the Father. Behind the practice of calling one another “Brother” lies the teaching of the Apostle: “And because you are sons, God hath sent the Spirit of his Son into your hearts, crying: Abba, Father” (Galatians 4:6). We call one another “Brother” because the Holy Ghost, dwelling in us, compels us to call God, “Father”. Saint Benedict gives the title “Brother” to the younger members of the community; it is an expression of affection and of reverence, expressing the bonds that unite us, through the abbot and through those who participate in his paternity, to Christ; and through Christ, to the Father.

Fathers
The title “Father”, given to the seniors of the community is a reverent acknowledgement of their participation in the spiritual fatherhood of the abbot, and of their role as mediators of paternal love and generators of life in the community. A community without fathers will not survive. The monastic tradition has always recognised the grace of supernatural generativity. Whenever this grace is treated with indifference, or with scant respect, the predominant ethos becomes one of spiritual sterility.

Fathers and Brothers
In the Middle Ages the Mendicant Friars, Franciscans, Dominicans, and others, chose to be called Frater or even Fra or Fratello. It was when the Friars began preaching and hearing confessions that the people began addressing the them as Father. They continued to use Frater among themselves, even for their superiors. Later on, when Saint Philip Neri and the first Oratorians came to be addressed as Father, it was an expression of confidence in their spiritual wisdom and discernment and an acknowledgement of their supernatural paternity.

1968
The social upheavals of 1968 ignited an anti–paternal/maternal trend that found its repercussion in the Church in dissent from Pope Paul VI’s prophetic encyclical, Humanae Vitae. Influenced by Nietzsche and by Freud, those in rebellion against all forms of authority found it necessary to “kill both father and mother”. At about the same time, in monasteries and religious communities the spousal and generative dimensions of the consecrated life were minimized or even erased from the collective consciousness by radically changing the inherited vocabulary that expressed the mysteries of spiritual fatherhood and motherhood. This opened the way to the frenzied search for “self–fulfillment” and to the practice of a kind of spiritual contraception. The monasteries and communities that accepted the secular culture’s “contraceptive mentality” have been dying for the past fifty years.

Eros and Agàpe
Pope Benedict XVI’s presentation of eros (cf. Deus Caritas Est, 25 December 2005) — the love that desires union — informs the spousal dimension of consecrated life. His presentation of agàpe — the sacrificial love that engenders life — informs the paternal and maternal dimension of consecrated life. The ancient monastic titles of Father (Abba) and Mother (Amma) affirm and express the spiritual gifts by which life is transmitted from one generation to the next. Woe to the communities that have suppressed the vocabulary of spiritual generativity inherited from tradition or replaced it with secular terms that are deemed “politically correct” such as “leadership.”

Superiors or Leaders?
Similarly, there are communities that, without sufficient critical reflection, have abandoned the term “superior” for that of “leader”, thereby erasing from the corporate consciousness the vertical dimension of mediatorship in favour of a merely horizontal model. Such communities fall into a practical Protestantism, for the essence of Protestantism is the rejection of the sacramental economy and of participation in the “descending” and “ascending” mediatorship of Christ that it expresses.

Celibate Contraception
Some religious, taken in by a specious “humilism”, argue that the exclusive use of the titles of Brother and Sister better corresponds to an ethos of evangelical humility, simplicity and, of course, equality. They fail to see that this usage inadequately expresses the normal spiritual development through betrothal and espousal into spiritual fecundity and generativity. Sociologists will argue that the things a society refuses to acknowledge will, with time, disappear from the culture. The traditional expression of eros and agàpe within the consecrated life is effectively suppressed by the kind of social engineering that manipulates changes in vocabulary. How many religious have been lured, albeit unconsciously, into a mentality of spiritual contraception?