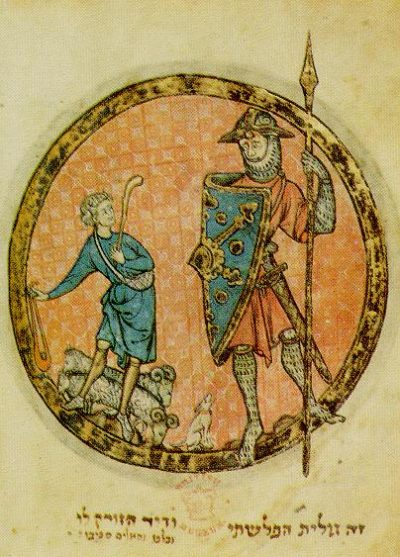 Dom Benedict preached the following sermon at Holy Mass this morning (4th Sunday after Pentecost), rightly linking the lesson at Matins (1 Samuel 17:1–16) to the Introit of the day.

“David first, last and central.” This is how the great Father of the Church, Saint John Chrysostom, describes the place of the Psalms of David in the life of the Catholic Church.

David, King and Prophet, David the ancestor of Christ, inspired by the Holy Ghost (along with certain other authors) chanted the Psalter into existence. The Psalter became the prayer book of Israel; and more importantly, it became the prayer book of Jesus himself. The Psalter figures in all of the most important works, miracles, and teachings of Jesus. Moreover, the Psalms were the privileged language of Our Lord’s own mysterious communication with his Father.

The Psalms were not created for Israel alone, the Israel and the Jerusalem of this earth; they were inspired by the Spirit in view of the day that the God-Man, the Anointed One, would pronounce them and chant them with his own sacred lips. The prayer of Israel from the mouth of David becomes the prayer of the Body of Christ, from the mouth of the Head of the Body himself.

The Psalter is one of the great means by which you and I, and all Christians, are able in some way to become Christ: the Psalms in our mouths and in our hearts becomes the way in which Christ is formed, born anew, within us. And so it is that there is not one single Mass, not one single Office, not one single Sacrament or service of the Church in which the Psalter does not, in some way, form an integral part.

Today, on the fourth Sunday after Pentecost, David appears even more central than usual. Every summer Sunday in the traditional Roman Rite has, as its hidden background, some episode of the Old Testament as read in the service of Matins, the Church’s night vigil. And so the choice of reading at Matins often explains the choice of readings and chants at Sunday Mass.

This is especially clear today. We read today at Matins about the triumph of the young shepherd boy David over the Philistine giant, Goliath of Gath. The antiphon at Vespers last night was: “So David prevailed over the Philistine, with a sling and a stone.”

And just a moment ago we chanted at the beginning of this Mass the following Introit, using the words of Psalm 26. “The Lord is my light and my salvation: whom shall I fear? The Lord is the protector of my life: of whom shall I be afraid? My enemies that trouble me have themselves been weakened and have fallen. If armies in camp should stand together against me, yet my heart shall not fear.”

Are these not the words of David preparing to flight and slay the fierce giant? “Whom shall I fear? Of whom shall I be afraid? My heart shall not fear, because God is my light, my salvation, and my protector.” Are these not the words also of Christ himself, David’s Son, praying to his Father before he takes on the spiritual Goliath, the angelic giant who oppresses the earth and the people of God?

The rest of the Mass continues to place the words of the Psalms upon the lips of David the warrior, and of Christ the divine warrior. In the Gradual (Ps. 78) he pleads with God that the sins of the people may be forgiven, lest the heathen triumph over them, taunting, “Where is their God now?” “Deliver us,” says the Anointed One, “and help us, O Saviour, O Father, that thy name may be glorified.”

He is (the Alleluia verse, Ps. 9) the God of justice who sits upon his throne of righteousness, bringing the counsel of the enemy to naught, that he may become the refufe of the poor, the needy, the little, the humble in time of tribulation.

David cries out (in the Offertory, Ps. 12) to God that he may never sleep in death, lest his enemies prevail against him; these words were uttered in view of the death and burial of Christ his descendant, praying to his Father in the silence and darkness of the sepulchre: “Lighten my eyes, O Father, that I sleep not forever in death: lest my enemy, the enemy of mankind, say that he has prevailed against God himself.”

“The Lord,” says David and ultimately Christ himself (Communion antiphon, Ps. 17): “The Lord, the Father, is my firmament, firm ground to stand on, lest I stumble and fall; he is my refuge from the storms of this life; he is the one who delivers me from the powers of darkness; my Father is my helper, without whom I have no true and strong helper on this earth.”

The Psalter is Christ’s prayer and therefore it is ours. Let us not take this divine gift for granted; never let a day pass without turning in some way to the Psalms, even if it is one verse, one sentence, one line. “The Lord is my light and my salvation: whom shall I fear?”

The words, the songs, of David as our daily bread, our shield and our protection.

“So David prevailed over the Philistine, with a sling and a stone.”