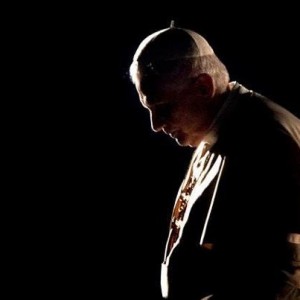 I will be spiritually with you. My state as a ‘cloistered monk’ does not allow me a presence that is also exterior. I leave my cloister only in particular cases, [when] personally invited by the Pope. (Pope Benedict XVI, 10 October 2014)

Hidden from the World
Here at Silverstream Priory we have, from the very beginning, felt akin to Pope Benedict XVI in his choice of a hidden life. I recall what he said on 14 February 2013:

I remember that in his very last General Audience on 27 February 2013, Pope Benedict XVI referred to the Rule of Saint Benedict:

I am not abandoning the cross, but remain in a new way with the Crucified Lord. I no longer carry the power of the office for the government of the Church, but in the service of prayer I remain, so to speak, within Saint Peter’s bounds. Saint Benedict, whose name I bear as Pope, will be for me a great example in this. He showed us the way to a life which, active or passive, belongs wholly to the work of God.

In the Narrow Enclosure of the Cross
Our vocation is to silence, and to hiddenness, and to separation from the world. It was when Our Lord Jesus Christ was lifted up from the earth, and held in the narrow enclosure of the Cross, that He exercised His priesthood supremely by offering Himself in sacrifice to His Father. Suspended upon the Cross, He entered into the silence and hiddenness of the Holy of Holies and, there, He offered Himself as Victim to the Father.

With Mary in the Holy of Holies
The mystery of what He was doing was hidden, even from the eyes of those looking on. His disfigured Face, and bruised and bloodied Body displayed nothing of the glory that shone upon Him in the Hour of His sacrifice. Even His most holy Mother, who entered the Holy of Holies with Him to make her offering in union with His, saw and felt nothing of the Divine Glory into which His oblation was received by the Father, in the Holy Spirit. The experience of the Mother of Sorrows was one of silence, and hiddenness, and separation from all that surrounded her in that Hour. Our Lady is the model of all who would unite themselves to the oblation of Jesus as victims.

Accept to Disappear
Words are useless. One must enter in, beyond the veil. One must leave behind and outside all consideration for earthly things. In silence, in hiddenness, and in solitude is Christ’s one oblation made perfect in souls. Like Pope Benedict XVI, then, we and all cloistered monks have to consent to become silent, accept to disappear, and cherish hiddenness.

Pope Benedict XVI has referred to himself as a “cloistered monk”. Like him, ours it is to leave all behind, to enter with Christ the Priest into the inner sanctuary of His oblation to the Father. A monastery of adoration and reparation is characterized by silence, and by hiddenness, and by disappearance into the inner sanctuary beyond the veil. There, and only there, will we become fit to be offered in union with the victimhood and priesthood of Jesus, in a way that gives immense glory to the Father and saves souls.

The Pattern of Our Life
Ours it is to learn from the contemplation of the Sacred Host how to be silent, how to disappear, how to leave the world. I look at Our Lord in the Sacrament of His redeeming love. There He is silent. There He is hidden. There He is separated from all things and, at the same time, present to all things. The Host is the pattern of Pope Benedict XVI’s cloistered life. The Host is the pattern of our life here. “One thing is necessary. Mary hath chosen the best part, which shall not be taken away from her” (Luke 10:42).