Skip to content
HomeChurch in IrelandPatrick, bound fast to the mystery of Christ

Saint Patrick’s Day
On this feast of Saint Patrick , I should like to reflect on his life and mission, and on the patrimony of the Catholic Faith that he bequeathed to his sons and daughters.

The Enlightener of Ireland
“Remember the marvels the Lord has done” (Ps 104:5). The psalmist invites us to remember, among other marvels, the wonderful works done by God through Saint Patrick, the Enlightener of Ireland. Sent to Ireland by Pope Celestine in 432, Saint Patrick delivered the true, Catholic and Apostolic faith to the Irish people. He announced, in the language of his own poetry, “the strong name of the Trinity, Christ’s incarnation, His baptism in the Jordan River, his death on the Cross for our salvation, His bursting from the spicèd tomb, His riding up the heavenly way, and His coming at the day of doom” (Saint Patrick’s Breastplate). Patrick, bound fast to the mystery of Christ, enlightened the minds and warmed the hearts of a people “dwelling in darkness and in the shadow of death” (Lk 1:7) with faith in the Son of Mary.

When Every Staff of Bread Was Broken
This is the faith for which the Irish risked home and possessions and life during years of cruel persecution. This is the faith kept alive in the humble telling of the beads, in hospitality heroically given to fugitive priests, and in the preparation of secret altars for the Holy Sacrifice, for nothing mattered to them more than Holy Mass. This is the faith that sustained the Irish even when, as the psalm says, they “were wandering from nation to nation, from one kingdom to another” (Ps 104:13), when “famine fell upon the land, and when every staff of bread was broken” (Ps 104:16). This is the Catholic faith passed on, at great cost, from one generation to the next.

The Transmission of the Faith
A faith that is not passed on grows dim and, like a dying flame, becomes no more than a flicker offering little in the way of light and warmth. The transmission of the faith assures its vitality. Faith is inseparable from tradition, tradition being the transmission of what we ourselves have received from the saints: whole, unchanged, and intact. 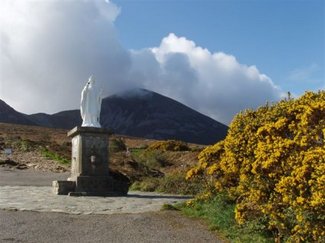 Things Put Into Our Hands
Every now and then in life things are put into our hands to help us remember the marvels the Lord has done and to help us walk on the path of tradition, creating it again, and discovering it again with a sense of gratitude and wonderment. After the death of my dear grandmother Margaret Mary Gilbride Kirby on March 23rd, 1993, it was necessary to sort through years of accumulated treasures in the house she had lived in.

A Little Irish Prayerbook
Among the things found in that house was a little Irish prayerbook. Its gilded pages are faded now and the once shining stamp of the Sacred Heart on its leather cover is dark with age. It is 154 years old, having been published in Middle Abbey Street, Dublin, in 1860. Blessed Pius IX was Pope. It bears the imprimatur of His Eminence Paul Cardinal Cullen, Archbishop of Dublin, and of the Right Reverend Doctor William Delany, Lord Bishop of Cork.

My Grandmother’s Faith
The prayerbook is called The Treasury of the Sacred Heart. In the back of the book in what appears to be a child’s hand, there is the date October 11th, 1912. That was the year of my grandmother’s second return to America from Ireland. In all she crossed the Atlantic four times. Childhood memories of Ireland enchanted her right until the end of her long life. She spoke of them often, her blue eyes sparkling. As for her faith, she lived it. “I could not go on without it,” she used to say. It was the faith she received, the transmitted faith, the faith of a holy tradition, the faith of a path beset with brambles and sharp stones. By persevering along the path of tradition, she recreated it for herself, and bequeathed it to her children and her children’s children.

A Treasury
If this little prayerbook could talk, what a tale it would tell! I don’t know who used it, but it is well used. The pages are worn and the binding coming unstitched. It is a remarkable little volume. Whoever named it, named it well. It is a Treasury. It contains the whole Ordinary of the Mass in Latin and in English, Vespers and Compline in Latin and in English, the Epistles and Gospels of the Sundays and principal feasts, the Seven Penitential Psalms, the Sacrament of Penance, the great hymns of the Divine Office for the whole liturgical year in Latin and in English. It contains meditations for the Holy Rosary and for praying the beads of the Seven Dolours. There is, of course, the Way of the Cross and the litanies that so often followed the Rosary in Irish homes. There are prayers to the Sacred Heart of Jesus and novenas to the Blessed Virgin, to Saint Joseph, Saint Patrick, and other saints. There is also The Jesus Psalter, a splendid old prayer that the Irish cherished and recited in the darkest hours of the Penal Times.

The Tale of A People Who Loved the Mass
Yes, if this little prayerbook could talk, what a tale it would tell! The tale of a people rising before dawn for Holy Mass — in Latin, with a Communion fast from midnight. The tale of a people sustained by their attachment to the Blessed Mother of God and to her rosary. The tale of a people drawn to the mystery of the Sacred Heart of Jesus: the image of Suffering Love that held a place of honour in every Irish home. The tale of a people who knew their faith: the Gospels, the Commandments, the Precepts of the Church, the Seven Capital Sins, the Gifts and Fruits of the Holy Ghost, the Corporal and Spiritual Works of Mercy, and all the rest! The tale of a people who made their way often to a dark confessional, there to pour out their misery, their failings, and their sorrow to a man in whom they recognized the merciful Christ, and from whose mouth they received the miracle of absolution and of peace.

Remember . . . and Walk
This little prayerbook from Ireland, now nearly a century and a half old, does speak in its own way. It was placed in my hands for a reason. Perhaps so that I could tell you its story again for this Saint Patrick’s Day. “Remember the marvels the Lord has done” (Ps 104:5). And walk in the path of tradition. The best way to keep it alive is to walk on it, because every time you walk on it, you create it again for yourself, and for generations to come.