Skip to content
HomeLent 2015Between the porch and the altar 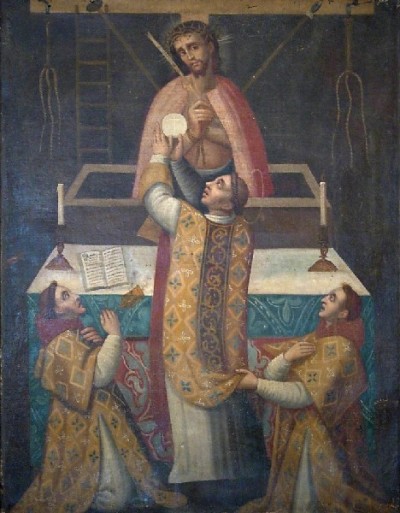 Intercessors and Reparators
In the First Lesson at Mass on Ash Wednesday (Joel 2:12-18), as well as in one of the magnificent Lenten responsories at Matins, the Prophet Joel emphasizes the role of the priests who serve in the temple, the ministers of the Lord. Taking their place as mediators between the porch and the altar, they represent sinful men before the Face of the All-Holy God, and the Mercy of God before sinful men. Theirs is, in effect, a mediatorship of intercession and reparation.

Mediator between God and men and High Priest who has gone before us into heaven, Jesus the Son of God quite clearly had one aim in view when He undertook the mission of mercy which was to endow mankind with the rich blessings of supernatural grace. Sin had disturbed the right relationship between man and his Creator; the Son of God would restore it. The children of Adam were wretched heirs to the infection of original sin; He would bring them back to their heavenly Father, the primal source and final destiny of all things. For this reason He was not content, while He dwelt with us on earth, merely to give notice that redemption had begun, and to proclaim the long-awaited Kingdom of God, but gave Himself besides in prayer and sacrifice to the task of saving souls, even to the point of offering Himself, as He hung from the cross, a Victim unspotted unto God, to purify our conscience of dead works, to serve the living God.[3] Thus happily were all men summoned back from the byways leading them down to ruin and disaster, to be set squarely once again upon the path that leads to God. Thanks to the shedding of the blood of the Immaculate Lamb, now each might set about the personal task of achieving his own sanctification, so rendering to God the glory due to Him.

For Priests
In the life of adoration and reparation that we try to live at Silverstream Priory, there is a compelling awareness of the call to participate in Our Lord’s priestly mediation by abiding “between the porch and the altar,” that is, between those of our brother priests on mission to the world; those whom circumstances have, in some way or another, separated from the altar; and those who, being alienated from the altar, have lost sight of the wellspring and summit of their priestly service.

The word “altar” represents not only the place of sacrifice, but also the one offered upon it, and the fire from heaven that ratifies and consumes the oblation. Pope Pius XII writes, “The Church prolongs the priestly mission of Jesus Christ mainly by means of the sacred liturgy. She does this in the first place at the altar, where constantly the sacrifice of the cross is represented and with a single difference in the manner of its offering, renewed.” As Benedictine Monks of Perpetual Adoration, we are called to place our own bodies in the breach and, in some way, by the oblation of ourselves, to close the gap between “the porch and the altar.” Listen again to Pope Pius XII:

The divine Redeemer has so willed it that the priestly life begun with the supplication and sacrifice of His mortal body should continue without intermission down the ages in His Mystical Body which is the Church. That is why He established a visible priesthood to offer everywhere the clean oblation[4] which would enable men from East to West, freed from the shackles of sin, to offer God that unconstrained and voluntary homage which their conscience dictates.

Present Your Bodies as a Living Sacrifice
The priestly life of the Redeemer — one of supplication and of sacrifice, or victimhood — is prolonged not only in the priesthood of the ordained, but also in the oblation of the lay faithful who take to heart the exhortation of the Apostle:

I beseech you, therefore, brethren, by the mercy of God, that you present your bodies a living sacrifice, holy, pleasing unto God, your reasonable service (Rom 12:1).

One of the singular graces of this Lent will be, it seems to me, a more profound awareness of what it means to abide in a state of adoration and victimal oblation “between the porch and the altar,” before the Eucharistic Face of Jesus, for the sake His beloved priests, and of His Spouse, the Church.