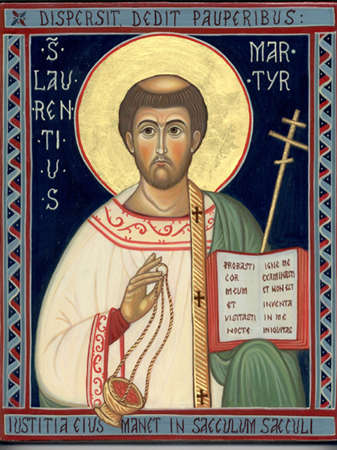 With the Patriarch Joseph and the Deacon Martyr Laurence
Last Sunday, Our transfigured Lord appeared to us, His face shining more brightly than the sun, with Moses the Lawgiver on his right, and Elijah the Prophet on his left. Today Our Lord appears to us as the Divine Physician and Deliverer from Evil, having, on one side, the patriarch Joseph, son of Jacob, and, on the other, Saint Laurence the deacon martyr, both figures of the chastity by which men become friends of God. Whereas Joseph figured prominently in today’s Matins, Saint Laurence greeted us at the door of the basilica built in his honour. We do well to pray today the Collect that is part of a priest’s daily thanksgiving after Holy Mass:

O God who gavest blessed Laurence strength to overcome his fiery torment, we pray Thee grant us grace to extinguish the flames of our vices. Through Christ our Lord. Amen.

Suffering
What do the patriarch Joseph and the deacon martyr Laurence have in common? First of all, both men suffered persecution. In the case of sixteen year old Joseph, beloved of his father Jacob, and resplendent in his coat of divers colours (Genesis 37:3), the persecution came from his own brothers who, perverted by jealousy, wished him dead. In the case of Saint Laurence, the servant of the poor, the persecution, motivated by greed, came from the pagan authorities of Rome who, in the end, condemned him to a slow painful death by fire. Both the patriarch Joseph and the deacon martyr Laurence, displayed a merciful charity in forgiving their enemies. In this, they imitated Our Lord who, from the Cross, prayed, “Father, forgive them, for they know not what they do” (Luke 23:34). They followed the example of Saint Stephen the protomartyr who, in the hour of his death, prayed for those who stoned him, saying, “Lord, lay not this sin to their charge” (Acts 7:59). 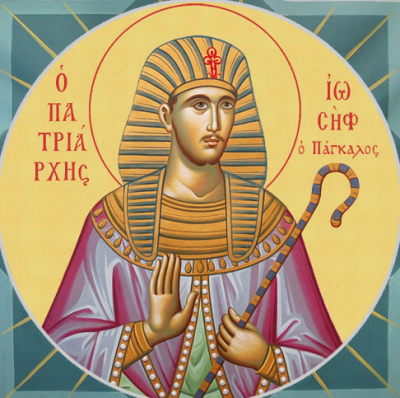 Joseph, the son of Jacob, is, in a special way, a patron saint of those who emerge from dysfunctional, abusive, and damaging family backgrounds. No family is perfect, but the family of Joseph, in spite of the goodness of his father Jacob and of his mother Rachel — remember that there was a first wife named Leah — was troubled by sibling rivalry and jealousy to the point of making Joseph’s older brothers seek his death.

And when they saw him afar off, before he came nigh them, they thought to kill him. And said one to another: Behold the dreamer cometh. Come, let us kill him, and cast him into some old pit: and we will say: Some evil beast hath devoured him: and then it shall appear what his dreams avail him. (Genesis 37:18–20)

Chastity
Drawn out of the pit and sold to merchants on the way to Egypt, young Joseph emerges from the attempt to do away with him, only to face another trial: the adulterous seductions of the wife of his master Potiphar. Young Joseph, being «of a beautiful countenance, and comely to behold» (Genesis 39:6), attracted the attention of the woman who sought to make him lie with her. Humiliated and enraged by his refusal to commit adultery with her, Potiphar’s wife denounced Joseph, claiming that he had made immoral advances. The chaste Joseph, triumphant over the woman’s seductions but condemned by her lies, is cast into prison. Joseph, having paid dearly for his purity, is a patron saint of those for whom chastity is a costly virtue.

In a Society Gone Mad
Today’s Mass is largely composed for the instruction of the catechumens of Rome. These were men and women, old and young, rich and poor, who were forsaking a pagan culture in order to embrace the newness of the Gospel of Jesus Christ. Christians were known for their mercy and their chastity. Becoming a Christian meant practising two virtues: first, an all–embracing charity that forgives even one’s abusers and persecutors; and, second, a bright, shining chastity that confounds a society gone mad in the pursuit of unbridled and illicit sexual pleasure.

Monastic Life as a Catechumenate and Second Baptism
The monastic life has long been seen as a kind of second catechumenate and a new baptism. This means that, even today, a man who knocks at the cloister door must forsake a culture grown hard and cold in vice. He must, first of all, resolve to forgive past hurts, to let go of every old bitterness, and to pardon those who caused him pain, or cast a shadow over his childhood, or impeded his growth, or treated him abusively. In Chapter IV of the Holy Rule, Saint Benedict sums up the exigencies of a conversion to the Gospel of Jesus Christ:

Not to render evil for evil.
To do no wrong to anyone yea, to bear patiently wrong done to oneself.
To love one’s enemies.
Not to render cursing for cursing, but rather blessing.
To bear persecution for justice’s sake. (Rule of Saint Benedict, Chapter IV)

The monastic conversion also means that a man must resolve to love chastity, as did the patriarch Joseph. Not for nothing does Saint Benedict, in the Holy Rule, distill his teachings on chastity into a single phrase: Castitatem amare, «To love chastity».

Charity and Chastity Together
Charity and chastity are not virtues reserved to monks, but monks are to practice these virtues in such a way as to encourage those who, living in the midst of the world with all its temptations, are tempted to be unforgiving, hard–hearted, and unchaste. The monastic life bears witness to the one way that leads to peace of heart: the way of a charity that compels a man to forgive all, to let go of the past, and to pray even for his abusers and persecutors. The monastic life also bears witness to the one way to a deep, abiding, happiness, and that is the way of chastity by which a man struggles against the temptations of the flesh which can be in every way as hot as the flames that licked at the body of Saint Laurence and caused him unspeakable torments.

In the Epistle (Ephesians 5:1–9), Saint Paul speaks both of charity and of chastity. He presents the perfection of charity as nothing less than a sacrificial victimhood, a participation in the oblation of Christ, the Lamb of God:

Be ye therefore followers of God, as most dear children; And walk in love, as Christ also hath loved us, and hath delivered himself for us, an oblation and a sacrifice to God for an odour of sweetness.(Ephesians 5:1–2).

Saint Paul also speaks clearly of the demands of chastity:

But fornication, and all uncleanness, or covetousness, let it not so much as be named among you, as becometh saints: Or obscenity, or foolish talking, or scurrility, which is to no purpose; but rather giving of thanks. For know you this and understand, that no fornicator, or unclean, or covetous person (which is a serving of idols), hath inheritance in the kingdom of Christ and of God. (Ephesians 5:3–5)

The Gospel shows us that the work of Christ is to cast out of souls the bitter, dark, and poisonous things that make a man hateful and unforgiving, selfish and unchaste. Our Lord does this by the Finger of God, that is, by the Holy Ghost. Wheresoever the Holy Ghost enters, there will be charity and chastity. There will be peace of heart, and gladness, and ceaseless thanksgiving.

The fruit of the Spirit is charity, joy, peace, patience, benignity, goodness, longanimity, mildness, faith, modesty, continency, chastity. Against such there is no law. And they that are Christ’ s, have crucified their flesh, with the vices and concupiscences.If we live in the Spirit, let us also walk in the Spirit. (Galatians 5:22–25)

When a man forces himself by means of his own striving to practice virtue, he places himself in a dangerous predicament. The counterfeit virtue that a man acquires, not by grace but by sheer application of the will, is both fragile and exhausting. Such a man may think that he has cleaned his house of filth, but it remains cold and uninhabited. Quickly the original devil returns, bringing others with him.

And when he is come, he findeth it swept and garnished. Then he goeth and taketh with him seven other spirits more wicked than himself, and entering in they dwell there. And the last state of that man becomes worse than the first. (Luke 11:25–26)

When a man begins to practice virtue by the grace of Christ and by the inner strengthening of the Holy Ghost, then his charity is supernatural, it is the life of God in him; his chastity is bright and lovely, a source of joy and «a sacrifice to God for an odour of sweetness» (Ephesians 5:2).

It is noteworthy that, in Latin, as in English, there is but a difference of two letters between caritas and castitas, between charity and chastity. This suggests that we are, all of us according to our state in life, called to a chaste charity, that is, a rightly–ordered love, and to a charitable chastity, that is a chastity that is warm, not cold, and tender, not harsh. Such is the Benedictine ideal set forth in the Holy Rule:

As there is an evil zeal of bitterness, which separateth from God, and leads to hell, so there is a good zeal, which keepeth us from vice, and leadeth to God and to life everlasting. Let monks, therefore, exert this zeal with most fervent love; that is, “in honour preferring one another.” Let them most patiently endure one another’s infirmities, whether of body or of mind. Let them vie with one another in obedience. Let no one follow what he thinketh good for himself, but rather what seemeth good for another. Let them cherish fraternal charity with chaste love, fear God, love their Abbot with sincere and humble affection, and prefer nothing whatever to Christ. And may He bring us all alike to life everlasting. (Rule of Saint Benedict, Chapter LXXII)

One who lives in a family — or in a cloister — made beautiful by caritas and castitas, by charity and chastity, will find himself singing, again and again, what the Communion Antiphon places on our lips this morning:

The sparrow hath found herself a house, and the turtle a nest for herself where she may lay her young ones: Thy altars, O Lord of hosts, my king and my God. Blessed are they that dwell in thy house, O Lord: they shall praise thee for ever and ever. (Psalm 83:4–5)