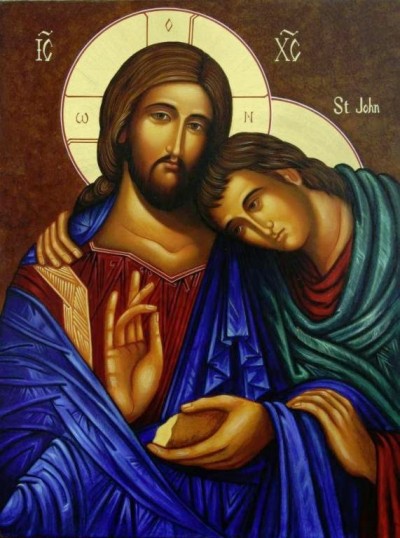 A Liturgical Theology of the Trinity
On Christmas Day, the reading of Saint John’s Prologue opened our eyes to behold the Light, the Word made flesh, the Son eternally begotten of the Father. (Every day at the end of Holy Mass, the so–called “Last Gospel” is, in its own way, a kind of Little Christmas.) Yesterday, the feast of the Saint Stephen drew our attention to the Holy Ghost. Today, Saint John the Beloved Disciple, venerated in the East as Saint John the Theologian, draws our hearts to the mystery of the Eternal Father. Thus do we have, in these first three days of Christmastide, a kind of Trinitarian triptych: on Christmas Day, the Eternal Son; on Saint Stephen’s Day; the Holy Ghost; on Saint John’s Day, the Eternal Father. Per Filium, in Spiritu, ad Patrem.

Through the Mystery of the Word made flesh, the new light of Thy glory hath shone upon the eyes of our mind, so that while we recognise God made visible, we may through Him be ravished unto to the love of things invisible.

The Christmas Preface is a distillation of the mystical theology of Saint John. Proceeding from what is revealed, we are drawn into what is concealed. Holding fast to what is shown, we are held in the embrace of what is hidden: from the Heart of the Son into the Heart of the Father.

Communion
This is the divine joy of Saint John. The wine that we shall bless today at the end of Holy Mass is the symbol of this divine joy.

Our message concerns that Word, who is life; what he was from the first, what we have heard about him, what our own eyes have seen of him; what it was that met our gaze, and the touch of our hands. Yes, life dawned; and it is as eye-witnesses that we give you news of that life, that eternal life, which ever abode with the Father and has dawned, now, on us. This message about what we have seen and heard we pass on to you, so that you too may be in communion with us. What is it, this communion of ours? Communion with the Father, and with his Son Jesus Christ. And if we are writing to you now, it is so that joy may be yours in full measure. (1 John 1:1–4)

Saint John uses the Greek word κοινωνίαν; in Latin it becomes communio, and in English communion or fellowship. Now, communion means “union with”. Saint John says, “What is it, this communion of ours? Communion with the Father, and with his Son Jesus Christ” (1 John 1:3) Communion is also used in the New Testament to designate the presence and the work of the Holy Ghost. We have communion with the Father and with the Son by the Holy Ghost who has been given to us. One might say that the work of the Holy Ghost is to insert us into the bosom of the Father. There, we are fully filii in Filio, sons in the Son, as Blessed Marmion loved to say.

Saint John the Theologian bears witness to a double movement: God descends to us in the Divine Person of the Son, and we, by the grace of divine adoption, ascend with the Son to the Father. Just as the descent took place by the power of the Holy Ghost — Et incarnátus est de Spíritu Sancto ex María Vírgine — so too does our ascent take place by the power of the Holy Ghost and the maternal cooperation of the Virgin Mary. The work of the Holy Ghost is to draw us, through the Heart of the Son, born of the Virgin Mother, upward into the bosom of the Father. “This is our proof that we are dwelling in him, and he in us; he has given us a share of his own Spirit” (1 John 4:13).

Ad Patrem
The Holy Ghost — we saw this yesterday in Saint Stephen — aligns us with the prayer of Jesus to the Father. Like a fair wind pushing a ship into its safe harbour, the Holy Ghost gently directs us through the Son into the bosom of the Eternal Father.

In Principio
Saint John emphasizes that the Word became flesh in time so that we, who are of time, might pass over with the Word into the mystery of The Beginning. In the Prologue of his Gospel, Saint John says, “In the beginning was the Word” (John 1:1), and then in the First Epistle he repeats it, “That which was from the beginning” (1 Jn 1:1). Saint John’s use of this expression should intrigue us. It should cause us to stop, to wonder, to ponder, to pray. The Beginning does not refer to a temporal beginning, nor to a commencement in time, nor to the start of anything. The Beginning has another meaning in both the Greek and the Latin texts. One might better translate it as wellspring or source.

Everything begins with the Father and returns to the Father. Herein is the very pattern of the whole Christian life. “I came from the Father, says Jesus, and have come into the world; again, I am leaving the world and going to the Father” (John 16:28).

In the Cloud
The approach to the mystery of the Father is not, however, facile and sentimental. “Clouds and thick darkness are round about him” (Psalm 97:2). The imagery of the psalm is that of Sinai, the terrible and untouchable mountain. The Lord said to Moses, “Lo, now will I come to thee in the darkness of a cloud, that the people may hear me speaking to thee, and may believe thee for ever” (Exodus 19:9). The mystery of the Father remains shrouded in the obscurity of faith or, as the medieval English mystic put it, in a “cloud of unknowing”. This is why the Son says to us in Saint John’s Gospel, “No man cometh to the Father, but by me” (John 14:6). The Holy Ghost draws us to the Word made flesh in the womb of the Virgin so that, united to the Eternal Son, we who are adopted children, might pass securely, albeit “made sorrowful in divers temptations” (1 Peter 1:6), into the bosom of the Father.

Going in to the Empty Tomb
You will recall that, after the resurrection, Saint John, following Saint Peter, entered the tomb. The empty tomb, like the altar in the sacred liturgy, reveals the Resurrection and Ascension of Christ, by whom we enter the presence of the Father. “He is not here, but is risen” (Luke 24:6). Saint John (speaking of himself in the third person) says: “Then that other disciple also went in, who came first to the sepulchre: and he saw, and believed” (John 20:8). Saint John’s choice of words evokes the ritual vocabulary of the Temple. Saint John goes into the empty tomb in much the same way as the high priest went into the holy of holies. The absence of the Body of Christ in the tomb is the sign of His abiding presence, “the fulness of Him who filleth all in all” (Ephesians 1:23). The Holy Sacrifice, offered upon the tomb–like altar, wonderfully transcends the emptiness of the altar–like tomb, allowing us to say, “He is here, but is hidden”.