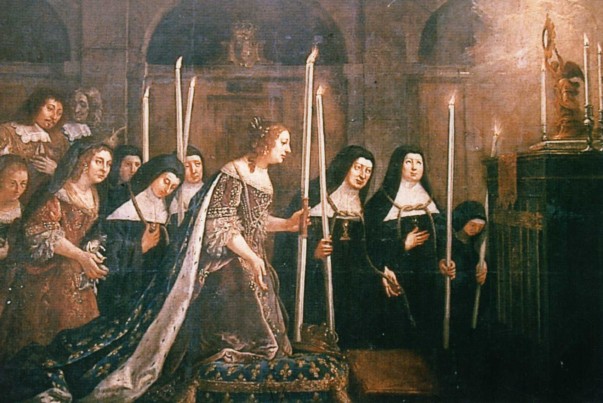 Horror in Pamplona
The sacrileges and profanations of the Thirty Years War in 17th century France pale in comparison to the  horrible sacrilege that took place in Pamplona, Spain earlier this year. Spanish “artist” Abel Azcona stole more than 240 consecrated Hosts by pretending to receive Holy Communion at Mass. He then placed the hosts on the ground to form the word “pederasty” in Spanish. The sacrilege is being prolonged by a display of photographs in a public art gallery in Pamplona, sponsored by the city’s Department for Culture. Protestors demonstrated against the sacrilegious exhibit in Pamplona last evening and more than 75,000 people have signed a petition asking the city council to remove the exhibit immediately.

A Lively Eucharistic Faith
The Benedictine Adorers founded by Mother Mectilde de Bar (1614–1698) bind themselves to cultivate a lively faith in the adorable Sacrament of the Altar. It is by faith that one penetrates beyond the veil of the Sacred Species; it is by faith that one lays hold of the Mystery at once concealed and revealed in the Most Holy Eucharist. Eucharistic faith waxes strong when it is exercised and expressed; Eucharistic faith wanes when the soul becomes listless and indifferent.

They will be victims to repair by their lively faith, the honour due the real Person of the Body and Blood of Jesus Christ that infidels and heretics take away by their blasphemies, by their sacrileges, and by their profanations.

They will be victims of love to repair by their union the respect that sinners have lost for the Holy of Holies when they approach It having affection for their sins, and when they try to unite Jesus Christ to Belial, and Dagon with the Ark in a profaned temple and in a soiled heart.

Finally, they will be victims to repair by their prayer the reverence that libertines and the greater part of Christians refuse or neglect to bring to the Holy Mysteries, at which they assist without a spirit of prayer and without devotion.

Loss of Faith
It would be naive to imagine that a certain complexus of imprudent liturgical reforms has not contributed to a loss of faith and to a proliferation of blasphemies, sacrileges, and profanations.  One can no longer afford to look uncritically at such practices as the celebration of the Holy Sacrifice of the Mass “facing the people”; Holy Communion given in the hand; the suppression of kneeling at Holy Communion; the use of Extraordinary Ministers of Holy Communion in ordinary circumstances; the disappearance of the altar rail;  and the desacralization of the sanctuary. All of these things, and the various other liturgical aberrations that have so troubled the peace of the Church over the past fifty years, have fomented indifference to the sacred and widespread irreverence. The shocking confiscation of Sacred Hosts with a sacrilegious intent is not unrelated to the casual handling of the Most Holy Sacrament that, in many places, has become routine.

Blasphemies, Sacrileges, and Profanations
During Mother Mectilde’s lifetime, the unrest of The Thirty Years War, and the incursions of Protestant soldiers bent on destroying Catholic worship, led to blasphemies, sacrileges, and profanations. In our own day, as the events in Pamplona, Spain, tragically demonstrate, these same affronts against the Most Holy Sacrament are committed within the Church herself, by those who, dissimulating themselves among the faithful, approach Holy Communion with wicked motives.

A Forerunner of Saint Thérèse
The appropriate response should be one of sorrow, of love, of reparation, and of solidarity with the poor souls who offend Our Lord in this way. Mother Mectilde’s charism is not to condemn such souls from above, but rather to descend into their spiritual darkness, and to identify with them, choosing solidarity with them, and representing them before the Most Blessed Sacrament. In her solidarity with those who sin against the adorable Mystery of the Eucharist, Mother Mectilde is a forerunner of Saint Thérèse of the Child Jesus and of the Holy Face, who wrote:

But, Lord, your child knows that you are the Light. She asks you to forgive her unbelieving brethren; she will willingly eat the bread of sorrow for as long as you wish; she will, for love of you, sit at this table where the wretched sinners eat their bitter food and will not leave it until you give the sign. But may she not say in her own name and in the name of her guilty brethren, “O God, be merciful to us sinners! Send us away justified! May all those who have never been illumined by the light of faith see it shine at last! O God, if the table defiled by them must be cleansed by one who loves You, I will gladly stay there alone and eat the bread of sorrow until You are pleased to lead me to your kingdom of light. I ask of you only one favour, that I may never displease You.

What Saint Thérèse expresses in this text, Mother Mectilde sought to express symbolically. Thus do her Benedictine Adorers make reparation before the Blessed Sacrament, kneeling at a column surmounted by a candle in the midst of the choir, with a rope about their necks.

If Thou, O Lord, Wilt Mark Iniquities
Mother Mectilde would have her Adorers make reparation, not by standing aloof from sinners, but by identifying with them, and by taking upon themselves whatever sufferings the severe and tender mercy of God permits for the healing of their souls. The Benedictine Adorer making reparation takes his place among sinners and, out of love, is content to remain in their darkness, to eat the coarse bread moistened by tears that is theirs, and to say:

If thou, O Lord, wilt mark iniquities:
Lord, who shall stand it.
For with thee there is merciful forgiveness:
and by reason of thy law, I have waited for thee, O Lord.
My soul hath relied on his word:
My soul hath hoped in the Lord.
From the morning watch even until night,
let Israel hope in the Lord.
Because with the Lord there is mercy:
and with him plentiful redemption.
And he shall redeem Israel
from all his iniquities. (Psalm 129:3-8)