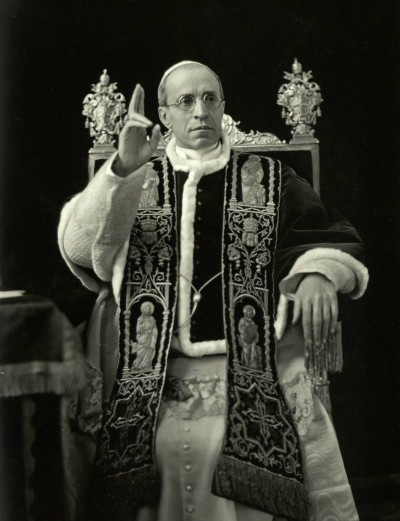 His words, not mine. See below the relevant articles from Mediator Dei (20 November 1947).  It has become fashionable, over the past few decades, to introduce liturgical innovations by referring to practices, real or imagined, of the “ancient”, “primitive”, or “early” Church. One sees traces of this among certain new communities and movements, as well as among proponents of the distribution of Holy Communion in the hand. Very often the proponents of such practices appeal to “our Jewish roots” and, paradoxically, at the same time, privilege a style of polyphonic singing, mistakenly qualified as “Byzantine” when , in fact, it is an ersatz imitation of 19th century Russian chant. Metanies (an act of reverence performed by bowing and touching the floor with one’s right hand) abound, and there is a peculiar fondness for wee little wooden benches upon which worshipers half–kneel–half–crouch. Beautiful icons and vesture complete the picture. One detects the influence of people like Lanza del Vasto and the founder of the Community of the Beatitudes, with the occasional dash of charismatic happy–clappiness. The total effect can be altogether worthy and reverent . . . and yet, one has the impression of a certain artificiality, of an attempt to plaster foreign elements onto a structure that was not designed to accommodate them. In any case, it is not the Roman Rite.

[Another school characterised by the same appeal to practices of the “early Church” eschews the sobriety and dignity of the Roman Rite in favour of a more domestic approach to the sacred liturgy: the dining room table, pottery vessels or oversized chalices with handles, large altar bread, much sitting about in a circle, and singing to the accompaniment of guitars and tambourines. The emphasis shifts from the offering of the Sacrifice to the sharing of the meal; the whole experience is more didactic than latreutic. Such things do not reflect the practice of the “early Church” — they reflected a very dated and subjective projection of someone’s idea of what the liturgy of the “early Church” may have looked — and sounded — like.] 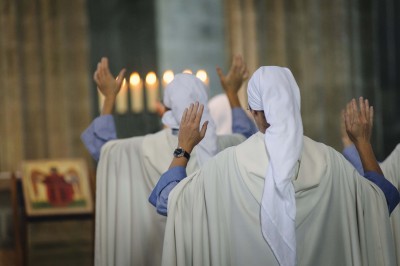 Recently, while in France, I attended a service of one of the “new” communities known for the beauty of their liturgical celebrations. The setting was glorious: one of the pinnacles of Western Christian civilization, a marvel of Romanesque architecture dating back to the 10th century. When the religious (of both sexes) began floating in before the celebration, a certain indefinable but unmistakable “Frenchness” filled the little chapel. This was to be a celebration by the French, for the French, according to a certain post–Conciliar French liturgical sensibility marked by the studied rejection of Latin, of Gregorian Chant, and of the ethos of the Roman Rite. This was all the more unfortunate in that the very stones of the place itself — much frequented by tourists and pilgrims from outside The Hexagon — cry out for the use of the Western Church’s common liturgical tongue, for her plainchant, and for the sobriety that characterizes her rites.

If the forms change, the rite changes. If one element changes the total meaning changes. Think back, if you remember it, to the Latin sung High mass with Gregorian chant. Compare it with the modern post-Vatican II mass. It is not only the words, but also the tunes and even certain actions that are different. In fact it is a different liturgy of the mass. We must say it plainly: the Roman rite as we knew it exists no more. It has gone.

It was clear to me that this “new” community — and many others like it, most of which are French in origin — have, in effect, invented a variety of new neo–Gallican rites. What would Abbot Guéranger say? This new neo–Gallicanizing approach to the liturgy is not without a certain charm, but it, in no way, represents a liturgical hermeneutic of continuity with the Roman Rite. The relevant teaching of Pope Pius XII in Mediator Dei might be revisited with much profit:

59. The Church is without question a living organism, and as an organism, in respect of the sacred liturgy also, she grows, matures, develops, adapts and accommodates herself to temporal needs and circumstances, provided only that the integrity of her doctrine be safeguarded. This notwithstanding, the temerity and daring of those who introduce novel liturgical practices, or call for the revival of obsolete rites out of harmony with prevailing laws and rubrics, deserve severe reproof. It has pained Us grievously to note, Venerable Brethren, that such innovations are actually being introduced, not merely in minor details but in matters of major importance as well. We instance, in point of fact, those who make use of the vernacular in the celebration of the august eucharistic sacrifice; those who transfer certain feast-days – which have been appointed and established after mature deliberation – to other dates; those, finally, who delete from the prayerbooks approved for public use the sacred texts of the Old Testament, deeming them little suited and inopportune for modern times.

60. The use of the Latin language, customary in a considerable portion of the Church, is a manifest and beautiful sign of unity, as well as an effective antidote for any corruption of doctrinal truth. In spite of this, the use of the mother tongue in connection with several of the rites may be of much advantage to the people. But the Apostolic See alone is empowered to grant this permission. It is forbidden, therefore, to take any action whatever of this nature without having requested and obtained such consent, since the sacred liturgy, as We have said, is entirely subject to the discretion and approval of the Holy See.

61. The same reasoning holds in the case of some persons who are bent on the restoration of all the ancient rites and ceremonies indiscriminately. The liturgy of the early ages is most certainly worthy of all veneration. But ancient usage must not be esteemed more suitable and proper, either in its own right or in its significance for later times and new situations, on the simple ground that it carries the savor and aroma of antiquity. The more recent liturgical rites likewise deserve reverence and respect. They, too, owe their inspiration to the Holy Spirit, who assists the Church in every age even to the consummation of the world.[52] They are equally the resources used by the majestic Spouse of Jesus Christ to promote and procure the sanctity of man.

62. Assuredly it is a wise and most laudable thing to return in spirit and affection to the sources of the sacred liturgy. For research in this field of study, by tracing it back to its origins, contributes valuable assistance towards a more thorough and careful investigation of the significance of feast-days, and of the meaning of the texts and sacred ceremonies employed on their occasion. But it is neither wise nor laudable to reduce everything to antiquity by every possible device. Thus, to cite some instances, one would be straying from the straight path were he to wish the altar restored to its primitive table form; were he to want black excluded as a color for the liturgical vestments; were he to forbid the use of sacred images and statues in Churches; were he to order the crucifix so designed that the divine Redeemer’s body shows no trace of His cruel sufferings; and lastly were he to disdain and reject polyphonic music or singing in parts, even where it conforms to regulations issued by the Holy See.

63. Clearly no sincere Catholic can refuse to accept the formulation of Christian doctrine more recently elaborated and proclaimed as dogmas by the Church, under the inspiration and guidance of the Holy Spirit with abundant fruit for souls, because it pleases him to hark back to the old formulas. No more can any Catholic in his right senses repudiate existing legislation of the Church to revert to prescriptions based on the earliest sources of canon law. Just as obviously unwise and mistaken is the zeal of one who in matters liturgical would go back to the rites and usage of antiquity, discarding the new patterns introduced by disposition of divine Providence to meet the changes of circumstances and situation.

64. This way of acting bids fair to revive the exaggerated and senseless antiquarianism to which the illegal Council of Pistoia gave rise. It likewise attempts to reinstate a series of errors which were responsible for the calling of that meeting as well as for those resulting from it, with grievous harm to souls, and which the Church, the ever watchful guardian of the “deposit of faith” committed to her charge by her divine Founder, had every right and reason to condemn.[53] For perverse designs and ventures of this sort tend to paralyze and weaken that process of sanctification by which the sacred liturgy directs the sons of adoption to their Heavenly Father of their souls’ salvation.