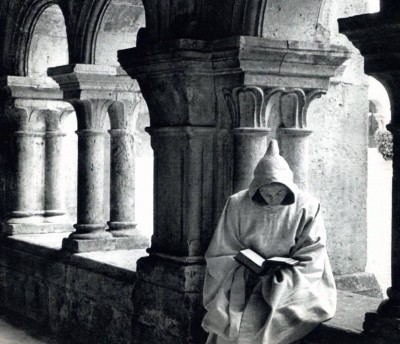 Advent Hope
This morning at Matins of the First Sunday of Advent, Pope Saint Leo the Great (400–461) gave us a message of hope. He said:

If in this life, it is difficult to persevere, it is possible, nevertheless, oftentimes to begin again, in order that we may be occupied more frequently and more intently with spiritual things rather than carnal ones. (Sermon IX, On the December Fast)

Setting Out Again
Advent is the season of a new beginning. It is the moment to start afresh. The inner movement of Advent surges upward and outward towards God. Thus did we sing this morning at Holy Mass: “All my heart goes out to thee, O Lord my God” (Psalm 24:1). Year after year the Holy Ghost gives us this time of grace and so helps us to leave behind all of those things that make us heavy–hearted, earth–bound, and lethargic. Advent, the beginning of the liturgical year, brings to souls the grace of setting out once again with, as Saint Clare of Assisi says, “swift pace, light step, and unswerving feet”.

Out of Darkness
Pope Saint Leo the Great has an altogether different message. He speaks in the name of Christ. He speaks in the power of the Holy Ghost. He speaks with the authority of a Truth that can neither deceive or be deceived, a Truth that is invincible and incorruptible, a Truth that is utterly reliable, a Truth upon which one can build and rebuild one’s life, though it be altogether in ruins. Saint Leo says, “If in this life, it is difficult to persevere, it is possible, nevertheless, oftentimes to begin again”. The state in which you find yourself at present matters little; what matters is the state to which Christ is calling you: the state of grace, of holiness, of communion with the Father in the consolation of the Holy Ghost.

“You”, says Saint Peter, “are a chosen race, a royal priesthood, a consecrated nation, a people God means to have for himself; it is yours to proclaim the exploits of the God who has called you out of darkness into his marvellous light. Time was when you were not a people at all, now you are God’s people; once you were unpitied, and now his pity is yours”. (1 Peter 2:9–10)

Moderation
Pope Saint Leo the Great also speaks to us of the necessity of moderation, of using created goods in a measured way, with restraint, avoiding all excess. Saint Leo speaks specifically of moderation in eating and drinking because for him, back in the 5th century, Advent was a season marked by fasting and abstinence, even as it ought to be for us today. Pope Saint Leo says:

By daily experience, beloved, it is proved that the mind’s edge is blunted by over-indulgence of the flesh, and the heart’s vigour is dulled by excess of food, so that the delights of eating are even opposed to the health of the body, unless reasonable moderation withstand the temptation and the consideration of future discomfort keep from the pleasure. (Sermon IX, On the December Fast)

What are some concrete examples of this? If I eat too much, I will feel heavy and bloated. Prayer, exercise, and study will be difficult. If I drink too much, I will find it hard to get out of bed the next day; my emotions will go from being abnormally intense to being altogether dull; my reason will be impaired. If I watch too much television, I will be disinclined to read things that require mental exertion. If I spend too much time in front of the computer, I will put myself at risk for mental fatigue which, in turn, can lead to general gloominess. Saint Leo was preaching a very practical Christian wisdom in his Advent sermon. He goes on to say:

It is the function of the soul to deny things to the body which is subject to it, and acting on its interior conviction, to keep back the outer man from things unseemly. Then will the soul, more often free from bodily lusts, sit at leisure in the inner temple of the mind, meditating on Divine Wisdom. There, away from all the noise of earthly cares, it may in silence enjoy holy thoughts and eternal delights. (Sermon IX, On the December Fast)

Moderation in food, drink, sleep, talking, and use of the social media are necessary for any man who desires to give himself over to watchfulness in prayer. Drunkenness, heaviness, and indigestion are impediments to prayer. So too are an unrestrained use of technology, an immoderate use of the social media, or any other compulsion, addiction or excess.

Otium: Holy Leisure
Moderation makes room in one’s life for what the monastic Fathers of the Middle Ages call otium. Otium means leisure, tranquility, and freedom from care. Otium is related to the quies (quiet repose)  of Western monasticism and the hesychia (holy stillness) of Eastern monasticism. Otium lies between otiositas (idleness) and negotium (hyper–busyness), which is the very negation of otium. Inimical to the monastic otium are such things as noise, rushing from one thing to another, and febrile banging about. Dom Jean Leclercq, in his classic The Love of Learning and the Desire for God, calls otium the principal activity of the monk. It is paradoxical that the principal activity of the monk should be an absence of activity. This, perhaps, is something that people living in the rush and and noise of the world can profitably take away from a monastery: a bit of Advent otium, some measure of quiet and tranquillity. Perhaps this is what you will take away from Vespers this evening, together, I hope, with the absolute certainty that, as Pope Saint Leo the Great says, “it is possible . . . oftentimes to begin again” (Sermon IX, On the December Fast).