Skip to content
HomeHomiliesOffering ourselves to be set ablaze 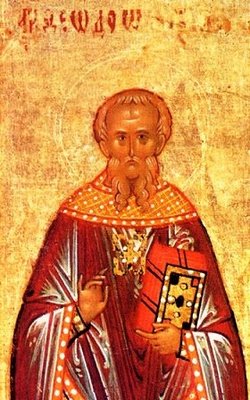 As  is our custom on Thursday, we shall have today the weekly Votive Mass of the Most Blessed Sacrament but, following our Benedictine calendar, we shall also commemorate Saint Theodore Studite with the following Collect:

O God, who through the blessed abbot Theodore didst restore the beauty and order of the cenobitic life, grant, we beseech Thee, that by his example and help, we may be configured to the sufferings of Christ through patience, and so be found worthy of a share in His kingdom.

Two Saints of the East
The calendar is charged today with a double “weight of glory” (2 Corinthians 4:17), for while the Roman calendar commemorates Saint Josaphat, bishop and martyr, the Benedictine calendar offers us the memorial of Saint Theodore the Studite, abbot. In commemorating the two saints, there is not dissonance, but a profound resonance. Theodore and Josaphat are both Eastern Orthodox saints. Theodore, abbot and reformer of the great Stoudion monastery in Constantinople, belongs to the undivided Church. He died in 826, well before the Great Estrangement of East and West. Josaphat, bishop in Ukraine, suffered the tragic effects of that estrangement. While remaining theologically, culturally, and liturgically Orthodox, he brought his flock into communion with the See of Peter in 1623, and paid with his own blood for the partial unity he achieved.

Blessed John Paul II’s Passionate Longing
“The Spirit of the Lord has filled the whole world” (Wisdom 1:7) but, for centuries, Roman Catholics acted almost as if the Spirit of the Lord was given to them alone. Eastern Orthodox Christians, from their side, were more than reticent to admit of any stirrings of the Holy Ghost in the West. When, on May 2, 1995, Saint Pope John Paul II promulgated his Apostolic Letter, Orientale Lumen (The Light of the East), he brought to a new level of fruitfulness the historic embrace of Pope Paul VI and Patriarch Athenagoras on January 6, 1964. Saint John Paul II’s words are clear:

Since the venerable and ancient tradition of the Eastern Churches is an integral part of the heritage of Christ’s Church , the first need for Catholics is to be familiar with that tradition. . . . The members of the Catholic Church of the Latin tradition must be fully acquainted with this treasure and thus feel, with the Pope, a passionate longing that the full manifestation of the Church’s catholicity be restored to the Church and to the world” (Orientale Lumen 1).

The Church Hierarchical and Charismatic
Among the riches offered by the Eastern Churches is a level of balance and reciprocity between the hierarchical and the charismatic elements of the Church. Today’s saints illustrate both. Saint Theodore is the prophet, fascinated by the Beauty of God, restoring a desert in the heart of Constantinople. Saint Josaphat is the suffering servant of visible communion with his brother bishops, and with the bishop of Rome. For the Eastern Churches, monks and nuns are Spirit-bearing fathers and mothers living on the margin of the institutional Church and yet, paradoxically, speaking wisdom from the heart of the Church. If monastics need to listen to their bishops; bishops, for their part, need to listen to the “voice of one crying in the wilderness” (Matthew 3:3).

Fire from the Altar
If the torch is to be kept burning, and is to burn here in Silverstream, and in other monasteries the world over, we must draw fire daily from the holocaust of charity that is the the Divine Liturgy, the Holy Sacrifice of the Mass, offering ourselves to be set ablaze, for when the torch entrusted to monks grows dim, the entire Church becomes a darker place.