Skip to content
HomeChurch in IrelandAll Saints of Ireland: All Flame 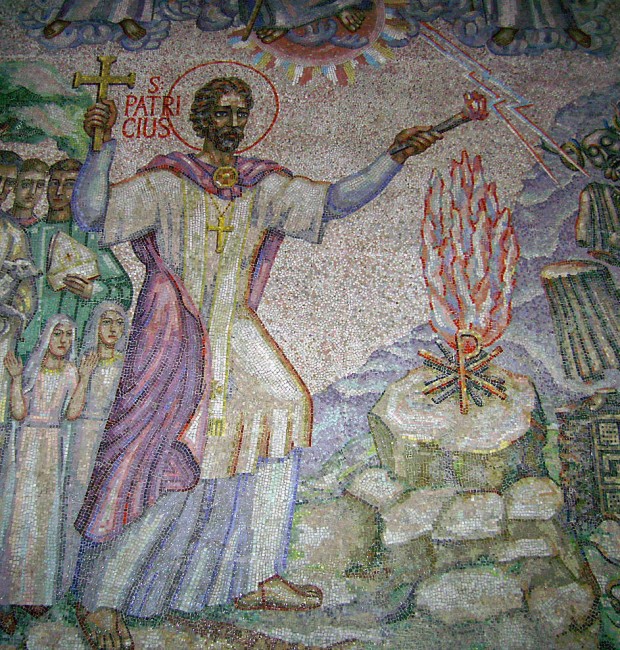 Mosaic in the Cathedral of Christ the King, Mullingar
Saint Patrick enkindles the Paschal Fire on the Hill of Slane

This Island of Ours
The approach of today’s glorious feast of All Saints of Ireland led to me to reflect on the distinctive character of the Church in what the liturgy calls “this island of ours”.  One cannot read through the vast catalogue of Irish saints without being struck by the overwhelming predominance of monks and virgins. Saint Patrick himself asked,

Monastic Ireland
Irish Christianity was, from the beginning, monastic in temperament and in organization. The Church was barely established when already monasteries sprang into life. Succeeding generations saw a spectacular growth: there came to be monasteries of over three thousand monks, centres of learning, monastic universities of a sort, drawing students from all over the continent.

The Missionary is Born of the Monastery
From the sixth to the twelfth centuries, these same monastic centres of learning were seedbeds of missionary work. Irish monks poured into France. Germany, Belgium, and Italy welcomed them. Saint John Paul II and Pope Benedict XVI both presented their visions of a Europe infused with the love of Christ, of a “new civilization of love.” Efforts toward the rechristianization of Europe must draw inspiration from the ideals of the Irish missionaries of the so-called Dark Ages. The Irish model needs to be recovered: the missionary is born of the monastery.

Hearths Ablaze with the Divine Praise
Some would argue that evangelisation of the culture must precede the implantation of the monastic life, that there is a dearth of monastic vocations because the culture has fallen back into the heathen ways of materialism and superstition. History, however, shows another way: the implantation of monastic centres, of hearths ablaze with the Divine Praise and radiant with holy learning, has always led to the birth and rebirth of cultures shaped by the Gospel. Wheresoever the praise of God is intoned by day and by night, there will the seed of the Word of God sprout, and grow, and yield an abundant harvest.

And whilst he soweth some fell by the way side, and the birds of the air came and ate them up. And other some fell upon stony ground, where they had not much earth: and they sprung up immediately, because they had no deepness of earth. And when the sun was up they were scorched: and because they had not root, they withered away. And others fell among thorns: and the thorns grew up and choked them. (Matthew 13:4–7)

The whole of Pope Benedict’s Pastoral Letter merits re–reading and meditation. On this feast of All Saints of Ireland, however, it is this passage that emerges luminous from the text:

I ask you to remember “the rock from which you were hewn” (Is 51:1). Reflect upon the generous, often heroic, contributions made by past generations of Irish men and women to the Church and to humanity as a whole, and let this provide the impetus for honest self-examination and a committed programme of ecclesial and individual renewal. It is my prayer that, assisted by the intercession of her many saints and purified through penance, the Church in Ireland will overcome the present crisis and become once more a convincing witness to the truth and the goodness of Almighty God, made manifest in his Son Jesus Christ.

Historically, the Catholics of Ireland have proved an enormous force for good at home and abroad. Celtic monks like Saint Columbanus spread the Gospel in Western Europe and laid the foundations of medieval monastic culture. The ideals of holiness, charity and transcendent wisdom born of the Christian faith found expression in the building of churches and monasteries and the establishment of schools, libraries and hospitals, all of which helped to consolidate the spiritual identity of Europe. Those Irish missionaries drew their strength and inspiration from the firm faith, strong leadership and upright morals of the Church in their native land.

Return to the Fire
The Saints of Ireland today call us with one voice — pleading, urging, exhorting, and comforting — to rebuild the Ireland of the Saints, not, course, by our own poor efforts and futile striving, but by a penitential return to the fire enkindled by Saint Patrick not far from here, on the Hill of Slane.

You are a chosen generation, a kingly priesthood, a holy nation, a purchased people: that you may declare his virtues, who hath called you out of darkness into his marvellous light: Who in time past were not a people: but are now the people of God. Who had not obtained mercy; but now have obtained mercy. (1 Peter 2:9–10)

A Spark in the Night
In all of this the role of Silverstream Priory, the least and last–born of Ireland’s monasteries, has a role to play. We are no more than a spark in the night, but out of that spark the Holy Ghost can enkindle a great conflagration of holiness. “If you will”, said Abba Joseph to Abba Lot, “you can become all flame”.