Skip to content
HomeEmber DaysEmber Days: A Time for Beginning 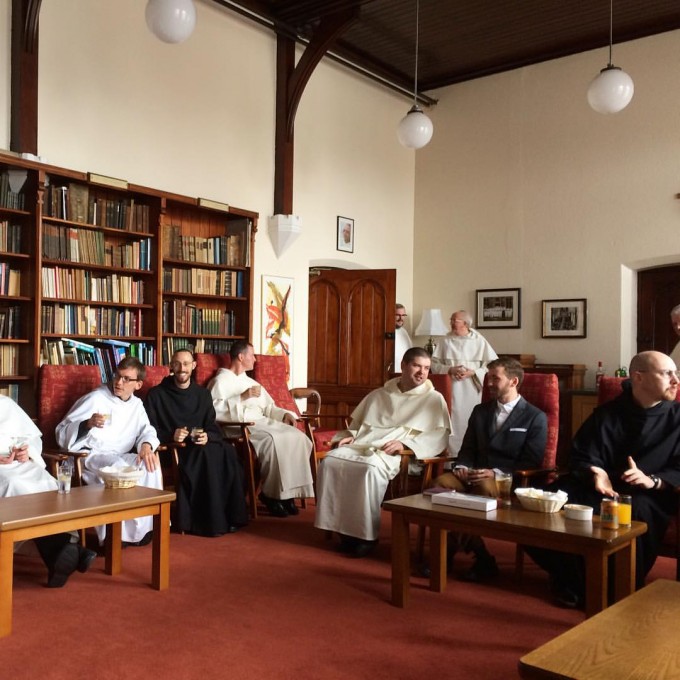 Benedictines and Dominicans
Yesterday, some of the brethren attended Holy Mass at St Saviour’s Priory, Dominick Street, Dublin to mark the opening of the academic year. Dom Elijah will begin his studies in theology at St Saviour’s on Monday. Ever since Saint Thomas Aquinas’ studies at Monte Cassino, there has been a fruitful collaboration between the sons of Saint Benedict and the Order of Preachers.

The Ember Days
The September Ember Days are upon us, signaling the passage of summer and the beginning of autumn. Here at Silverstream Priory, the chill in the morning air tells us that, in spite of the warm sunshine during the day, the long, slow descent into winter has already begun.

We beseech Thee, O Lord
that our fragility may be upheld
by the remedies of Thy mercy,
so that what of itself is falling into ruin
may, by Thy clemency, be restored.

Is not this a marvelous prayer? On the one hand, there is the sober recognition of ourselves such as we really are: fragile, and falling into ruin. On the other hand, there is a confident acknowledgment of the remedies of divine Mercy and of the restorative power of God’s clemency. The prayer is, thus, perfectly balanced.

Fragility
Most people, if they have any degree of self-knowledge and honesty, will admit to feeling and being fragile, that is breakable, susceptible of being fragmented. At certain hours in one’s life, one can have the overwhelming feeling of being shattered. Sometimes the shattering blow comes from outside ourselves, that is, from the world around us that is populated with other shattered and shattering human beings. Sometimes the shattering blow comes from the diabolical machinations of the Evil One. And still, at other times, we deal the shattering blow to ourselves by hurling ourselves against whatever jagged hardness happens to be at hand.

Remedies of Mercy
What can keep us, in spite of our native fragility, from being utterly shattered? The Collect tells us that the remedies of God’s mercy will uphold us, and will prevent our collapse. What are these remedies? They are, first of all, the Sacraments of Penance and of the Most Holy Eucharist. They are the “prayer and fasting” of which Our Lord speaks in today’s Gospel (Mark 9:16-28). Of prayer there is none more efficacious than the Divine Office, the voice of Christ united to that of His Spouse, the Church, and this from the rising of the sun to its setting. Of fasting there is none better than that prescribed or recommended by the Church, particularly during these Ember Days.

A Team of Physicians
Remedies of mercy too are the sacramentals of the Church on earth, and the solicitude and assistance of the Mother of God, and of the angels and saints in heaven. God has not abandoned us to our fragility. He has commanded His angels to bear us up, lest we dash our foot against a stone. (Psalm 90:12). The saints, for their part, are skilled physicians of souls and bodies, working together under the direction of the chief Physician, who is our Lord Jesus Christ.

The second part of the Collect is the ut or “so that” clause typical of the Roman Rite:

. . . ut quae sua conditione atteritur, tua clementia reparatur.
. . . so that what of itself is falling into ruin may, by Thy clemency, be restored.

There is a lovely balance to the two verbs in the Latin text: atteritur, reparatur; the idea is of falling into ruin, and of being repaired. Speaking for myself, I have, more than once, had the impression of falling into ruin. The Latin verb is perhaps closer to “being cast down to the ground.” Ireland is full of monastic ruins, and on difficult days I can see myself as one of them. The realism of the Roman Rite admits that we are all, at certain seasons and hours, falling into ruin. The supernatural optimism of the Roman Rite sees God, however, as the repairer of ruins, as the One who rebuilds what is falling to the ground. This gives me immense hope and a reason always to begin anew.