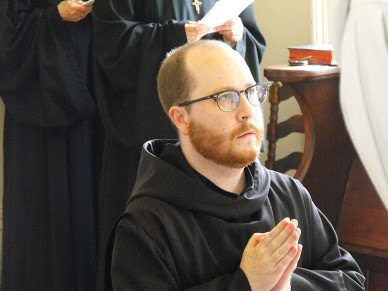 «And Peter answering, said to Jesus: Lord, it is good for us to be here».
(Matthew 17:4)
+
Dom Benedict, my dear son, when the time came for us to choose a date for this momentous rite, this life–changing action, this second–baptism, we passed in review the various feasts of late summer and, in the end, rightly chose today’s incandescent feast: the Transfiguration of Our Lord. The festival of the Transfiguration— and the radiant mystery it sets before our eyes — has long been considered, in both East and West, wonderfully emblematic of the monastic life.

The Lord has led you, as once he led Peter, James, and John, up into a high mountain, and to a place apart. You have, over the past five years, experienced the «hard and arduous» things of this ascent: bruised feet, weary bones, fatigue, discouragement, darkness, and storms. Nothing of what the psalmist describes in the psalm chosen by Saint Benedict for Compline is foreign to you now: «the terror by night; the arrow that flieth by day; the pestilence that walketh in darkness; the sickness that destroyeth in the noon-day» (Psalm 90:6). 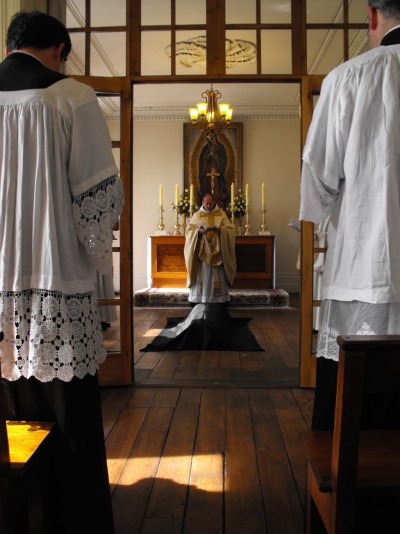 Silverstream in County Meath — has given you constant and unmistakable signs of His presence and touching manifestations of His mercy.

Once this sacred rite of «The Making of a Monk» is over, you — again like Peter, James and John — will necessarily leave the heights of Thabor for the homely and humble monastic quotidian: obedience to the relentless sound of the bell, dedication to the Divine Office in season and out of season, adoration of the Most Blessed Sacrament, work, and lectio divina, and all of this in a newness of life that cannot be described. Only one who has lived it can grasp its meaning. Expertus potest credere. And only one who has consented to this life of death knows that what the world judges death is superabundant life, and that what the world sees as folly is the highest wisdom. 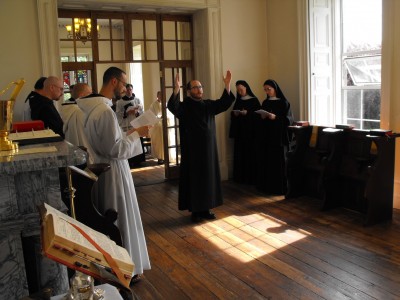 I shall not attempt to unwrap the riches of this ancient rite of the Making of a Monk. The origin of the rite goes back over a thousand years and more. It has been called, and rightly so, a second baptism, a mystery of death and resurrection, a configuration to Jesus Christ, crucified, buried, risen, ascended, hidden in God in glory, and hidden in lowliness in the Sacred Host. This only would I say to you, dear Dom Benedict: abandon yourself now to the prayer of Christ and of His Church, surrender to the invisible operations of the Holy Ghost, and you shall emerge from these sacred rites a monk — that is a single–hearted man who lives unto God alone in an ineffable commerce of love. Be like the host laid upon the corporal. Prepare yourself not so much to act as to be acted upon, not so much to speak as to hear the Word, not so much to give as to receive. You are in this moment with the Virgin of Nazareth, Our Lady of the Cenacle: Fiat mihi secundum verbum tuum. Let it be done unto me according to Thy word.

At the heart of this sacred rite there is a most touching dialogue: an exchange between son and Father, between Father and son, a playing out of the mystery of divine adoption that Blessed Abbot Marmion so often preached. You, like a little child lifting his arms to his father, will sing that ancient song that rises from the depths of the human heart yearning for, and straining toward, the divine embrace for which it was created: Suscipe me, Domine. Lift me up, O Lord. Take me to Thyself. Hold me safe in Thy embrace. Claim me as Thy own. And in response to this cry out of the depths there will come a voice from heaven, Hic est filius meus dilectus. This is my beloved son. In this exchange all is said: the child cries, the Father answers. The Father’s answer, dearest Dom Benedict, is what you have been waiting to hear all your life. You are about to be made a monk.