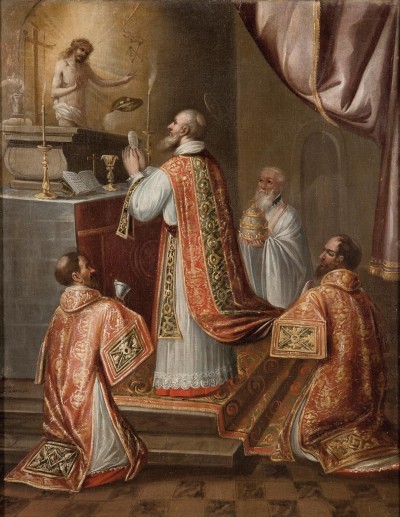 My Eyes and My Heart Shall Be There Always
This morning at Matins, we read that the Lord appeared to King Solomon, and said to him: ”

I have heard thy prayer and thy supplication, which thou hast made before me: I have sanctified this house, which thou hast built, to put my name there for ever, and my eyes and my heart shall be there always. (3 Kings 9:3)

What more could King Solomon, the builder of the temple at Jerusalem, ask? God Himself promises to put His Name within the temple (that is to say His divine presence), and not only His name, but also His eyes, seeing all that is done there, and His heart open to the people He chose for Himself, and ever–faithful to them in a covenant of strong and tender love. The temple, then, is the place of God’s indwelling presence, the one place in which the children of Israel were certain of finding God at home, of having their prayers heard, and of receiving mercy.

In the Midst of Thy Temple
As for us, we have a new Solomon — the name Solomon means King of Peace — and He has built for us a new temple, that is the Church, His mystical Body. Therein we are certain of finding God, of having our prayers heard, and of receiving mercy. Rightly, then, did we sing in the the great upward movement of the introit:

Suscepimus, Deus, misericordiam tuam in medio templi tui.
We have received Thy mercy, O God, in the midst of Thy temple. (Psalm 47:10)

The new temple, however, is not localised in Jerusalem alone; it is found wheresoever the Body of Christ lives in His members, gathered before an altar, under the headship of a priest. Wheresoever a priest, bending over the bread that he holds in his hands, utters the words, “This is my Body”, Christ becomes present and, with Him and, because of Him, the Church is made present, the new temple, the indestructible temple that is the glorious Body of Christ, given for the ingathering of all the peoples of the world unto God, in the unity of the Holy Ghost.

In Silence
We read in the Third Book of Kings that Solomon’s temple was built in the greatest possible silence.

For this reason, there is at the heart of the Mass, the greatest possible silence. Mysteriously, it is in the great and solemn silence of the Canon of the Mass, that the temple from above, the Body of Christ, is given. It is the new Jerusalem descending from heaven:

And I John saw the holy city, the new Jerusalem, coming down out of heaven from God, prepared as a bride adorned for her husband. And I heard a great voice from the throne, saying: Behold the tabernacle of God with men, and he will dwell with them. And they shall be his people; and God himself with them shall be their God. And God shall wipe away all tears from their eyes: and death shall be no more, nor mourning, nor crying, nor sorrow shall be any more, for the former things are passed away. (Apocalypse 21:2–4)

The Body of Christ
At the same time, the temple, the Body of Christ, is being built from below as member is joined to member, and each member is conjoined to Christ, even as the branches are conjoined to the vine. “I am the vine: you the branches: he that abideth in me, and I in him, the same beareth much fruit: for without me you can do nothing” (John 15:5). The Eucharistic Body of Christ, the mystic Vine planted by the Father, is given, as Saint Thomas so clearly teaches, for the sake of the unity of His Mystical Body, concerning which the Psalmist sings:

Thou plantedst the roots thereof, and it filled the land. The shadow of it covered the hills: and the branches thereof the cedars of God. It stretched forth its branches unto the sea, and its boughs unto the river. (Psalm 79:10–12).

The Church is born and re–born, in every time and place, of the Most Holy Eucharist. The Apostle says:

The chalice of benediction, which we bless, is it not the communion of the blood of Christ? And the bread, which we break, is it not the partaking of the body of the Lord? For we, being many, are one bread, one body, all that partake of one bread.(1 Corinthians 10:16–17)

Rightly did we sing in the introit: “According to Thy name, O God, so also is Thy praise unto the ends of the earth” (Psalm 47:11). For this reason does Saint Peter say concerning the edification of the temple from below:

Be you also as living stones built up, a spiritual house, a holy priesthood, to offer up spiritual sacrifices, acceptable to God by Jesus Christ.(1 Peter 2:5)

The silence of the Sacred Host must reign, then, not only over the hearts, minds, and lips of the monks, but over the entire monastery and its land, so as to foster an atmosphere of order and of peace conducive to the prayer of the heart in a spirit of ceaseless adoration. (Constitutions of Silverstream Priory, art. 59)

It is in this Eucharistic silence — at Holy Mass and in all of life — that our spirits receive what Saint Paul, in the Epistle, calls the testimony of the Holy Ghost that “we are the sons of God” (Romans 8:16). Saint Ignatius of Antioch speaks of this:

Earthly longings have been crucified; in me there is left no spark of desire for mundane things, but only a murmur of living water that whispers within me, ‘Come to the Father’. (Letter to the Romans, 4)

In the Spirit of Filial Adoption
We are engaged in the silent building of the temple, not as hired hands who work only for a wage and seek to move on, but as workers engaged in the Opus Dei, the Work of God, workers who have received “the spirit of adoption of sons, whereby we cry, Abba, Father” (Romans 8:15). The man who falls away from Eucharistic silence is no longer capable of receiving the testimony of the Holy Ghost; he is in danger of falling away from the unity of the Mystical Body and of becoming a branch cut off from the vine, dried up, sterile, and destined to be cast into the fire.

Let All Mortal Flesh Keep Silence
There is an ancient hymn of the Liturgy of Saint James that originated in the Church of Jerusalem that expresses the awestruck silence in which the Church approaches the adorable Body of Christ, the very Body that makes her a living Body, a supernatural organism of members conjoined one to another and to Christ the Head.

Let all mortal flesh keep silence,
and with fear and trembling stand;
ponder nothing earthly minded,
for with blessing in his hand,
Christ our God to earth descendeth,
our full homage to demand.

O taste and see that the Lord is sweet: blessed is the man that hopeth in Him. (Psalm 33:9)