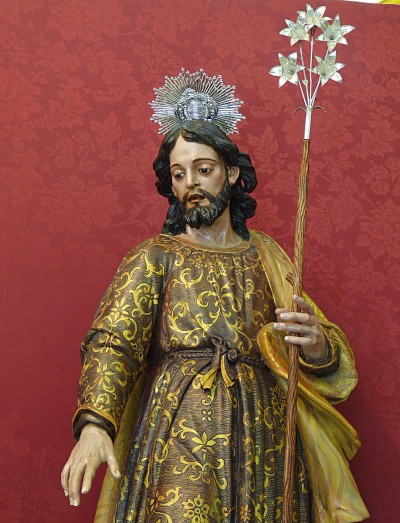 At Silverstream and in some other monasteries, today is the Solemnity of Saint Joseph in Paschaltide. Here again is my translation of the account of Saint Joseph’s apparition to Mother Mectilde de Bar on 19 March 1653. Mother Mectilde, very much like her Carmelite counterpart, Saint Teresa of Avila, had a tender devotion to Saint Joseph, entrusting to him all her needs and cares. Saint Joseph, for his part, did not disappoint her. Here is the text:

Seven days later, against all expectations, Dom Roussel, the prior of Saint–Germain–des–Prés under whose authority Mother Mectilde and her community fell, granted the privilege of reservation of the Most Blessed Sacrament and of solemn exposition in the community’s provisional little chapel.

Confident in the power of Saint Joseph’s intercession, you may want to pray with me today:

O glorious Saint Joseph,
spouse of the Blessed Virgin Mary,
just man, son of David,
whom the very Son of God did love, honour, and obey,
treating thee in all things as the most devoted son treats his father,
I promise and resolve, from this day forward,
to look to thee as to my own father,
to love thee, honour thee, and obey thee with filial devotion,
and to leave to thy paternal solicitude
all my needs, my anxieties, and my cares.
I am confident that thou wilt be to me a father,
and the best of fathers,
and that, under thy protection and in thy care,
I shall want for nothing.
Amen.